Pirates Try to Bounce Back Against Memphis | Beaufort County Now

Pirates Try to Bounce Back Against Memphis 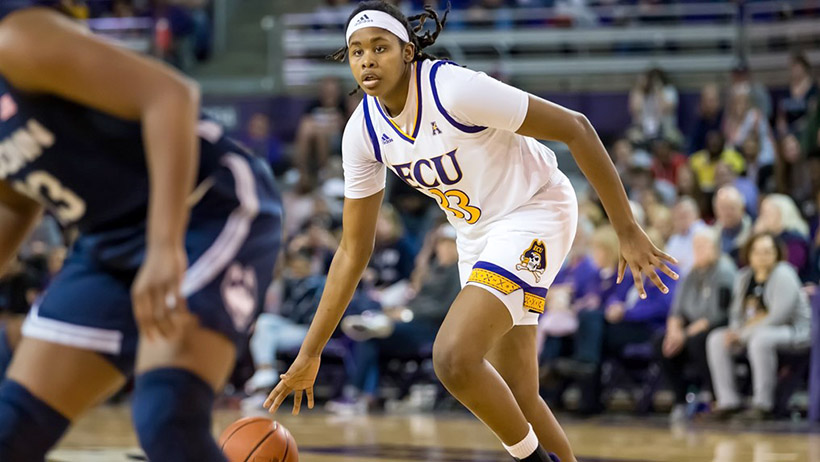 ECU (3-16, 0-6 AAC) attacked No. 3/5 UConn in the first quarter and the Pirates trailed just 22-18 just a minute into the second quarter. However, the power of the Huskies eventually won out and sent the Pirates to another loss. Despite the lopsided score, Lashonda Monk continued to be one of the best players in the conference, scoring 17 points to give her an average of 17.8 points against league opponents, fifth in the AAC. Monk also picked up five steals in the game, giving her 265 for her career and moves her into second place on the ECU career totals list. Taniyah Thompson is the other Pirate scoring in double-figures. Thompson is averaging 11.8 points and can become the first Pirates to score at least 10 points per game since Jasmine Young averaged 13.0 points in 2005-06. The Pirates are second in the country in steals (261), steals per game (13.7) and turnovers forced per game (25.0) while ranking sixth in turnover margin (+8.11). The ECU record for most steals is 388 set by the 2011-12 team while the 1979-80 team forced a school-record 760 turnovers.

Memphis (10-9, 1-6) was picked to finish in eighth in the AAC Preseason Poll, but the Tigers have won just one of their first seven league games. That win came at home against SMU. On the road, Memphis is just 3-4 and 0-3 against AAC teams. Their last time out, the Tigers fell 82-66 at UCF. Jamirah Shutes leads the team in scoring, averaging 14.2 points while Dulcy Fankam Mendjiadeu is scoring 11.5 points per game. Despite only two players scoring in double figures, Memphis is fourth in the conference in scoring offense (68.2 ppg), mainly thanks to six different players averaging at least 7.2 points. Mendjiaeu leads the team in rebounding, averaging 7.8 boards while Keke Hunter is also grabbing 7.2 rebounds. Madison Griggs is the team's best long-range shooter, as she is 20th in the nation in three-pointers made (54) and 32nd in three-point field goal percentage (.425). The Tigers are also able to limit opponent's triples, as teams are shooting just 28.9% against them from beyond the arc, ranking 83rd in the country.

Memphis has a slight lead in the all-time series between the two schools, going 17-14 against the Pirates. However recently, the Tigers have had a bigger advantage, with the Pirates going just 4-11 against Memphis since the 2010-11 season. ECU has not won two straight in the series since sweeping three meetings during the 2009-10 campaign. The Pirates will have a chance to change that on Tuesday evening after beating the Tigers 68-59 at home last February. That result ensured the two programs split last year's series, with Memphis winning 58-46 in its home arena. Monk scored in double-figures in both contests last year, including a game-high 22 in the Pirates' victory. ECU has a 10-4 home record against Memphis and has won three of four in Minges Coliseum since moving to the AAC.

The Pirates will be celebrating National Girls and Women in Sports Day on February 8 as the Pirates host Houston in Minges Coliseum. As a part of the celebration, girls between the ages of 7 and 13 are invited to shadow ECU employees throughout their game day activities. For more information and where to register to participate, please head HERE.

Tipoff is scheduled for 7 p.m., on Tuesday evening. Fans can stream the game HERE or follow the live stats HERE.