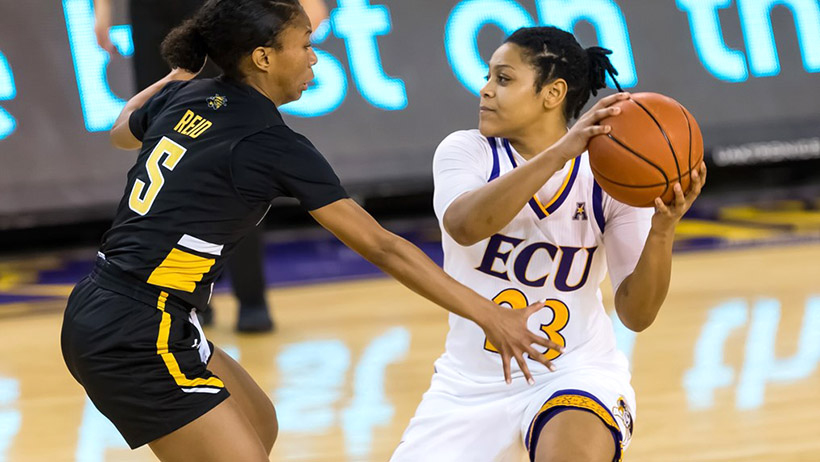 GREENVILLE, N.C. — Heading into the final game of the regular season, the ECU women's basketball team tries to head into the postseason on a high note as the Pirates battle Cincinnati on Monday night.

ECU (9-19, 6-9 AAC) rallied from 13 points down in the fourth quarter to beat Tulane 53-50 on Saturday night. That gave the Pirates five straight home wins to finish the regular season. ECU was led by Lashonda Monk who had nine steals for the second time in four games. The junior guard becomes the only ECU player with multiple nine-steal games in the same season and she also broke UConn's Gabby Williams' AAC record for career steals. Monk not only leads ECU in scoring (14.9 ppg), but is also third in the country in steals (117) and needs six more to tie Toina Coley for the ECU single-season record. Dominique Claytor had her third double-double in four games against the Green Wave, finishing with 10 points and 11 rebounds. She leads the Pirates on the glass, grabbing 6.3 boards and ECU is 7-1 when Claytor scores in double-figures this season. Taniyah Thompson finished with just nine points against Tulane, the first time in 11 games she had not reached double-figures, but Thompson continues to lead all AAC freshmen in scoring (13.7 ppg), steals (2.0) and minutes played (34.8 mpg). As a team, ECU needs just seven steals to tie the school record set by the 2011-12 team. The Pirates rank second in the country in steals per game (13.6) and turnovers forced (24.3).

Cincinnati (19-9, 10-5 AAC) is fighting for second place in the AAC. The Bearcats are currently tied with USF and UCF for that second spot. Cincinnati has won three of its last four games and is 13-3 inside Fifth Third Arena this season. Ilmar'I Thomas is third in the AAC in scoring, averaging 19.2 points and leads the league with a 59.2% shooting percentage. The junior also leads the Bearcats in rebounding, grabbing 8.4 boards while also ranking second in the conference with 108 free throws made and an 80.6 free throw shooting percentage. Antoinette Miller is sixth in the league in scoring, averaging 15.5 points while Angela Rizor is 17th with an average of 12.0 points. As a team, Cincinnati is in the top-20 in the country in assists per game (16.7) and assist to turnover ratio (1.27). The Bearcats do a good job of taking care of the ball, as their 13.1 turnovers per game rank 27th in the country. Cincinnati does struggle to generate points from behind the arc, ranking 326th in the country with just 3.7 made triples per game.

ECU has a slight 9-7 edge in the all-time series between the two schools. Last year, the Bearcats won the only meeting, taking a 68-57 victory in Greenville despite 16 points from Monk. Neither team has won two straight games in the series since ECU won six straight meetings between 2005 and 2016. Since ECU joined the AAC in 2014-15, the Pirates are 7-3 against the Bearcats. Finally, in regular-season finales, ECU is 27-23, including 3-2 since joining the AAC.

Tipoff will be at 7 p.m., on Monday night at Fifth Third Arena. Fans can stream the game HERE or follow the live stats HERE.