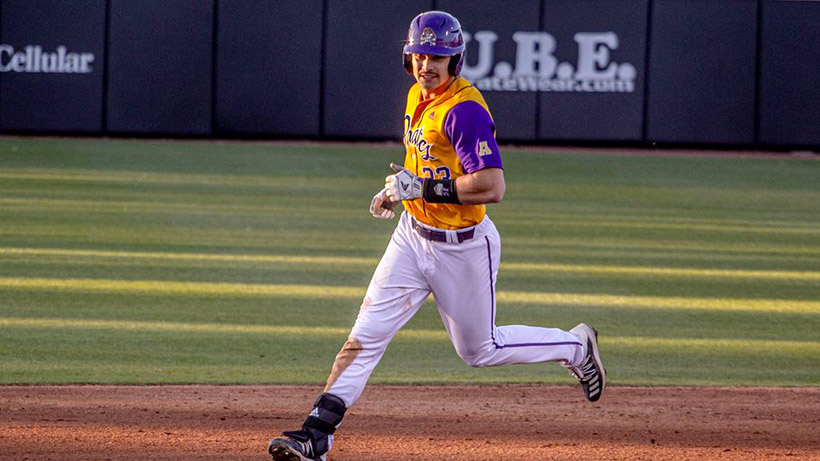 GREENVILLE, N.C.     Bryson Worrell hit a pair of home runs, while Lane Hoover and Connor Norby both tallied three hits leading No. 17 East Carolina to a 13-1 win over High Point Sunday afternoon at Lewis Field inside Clark-LeClair Stadium. With the win the Pirates improve to 8-3 on the season and the Panthers fall to 5-7.

ECU struck first with a pair of runs in the second frame taking an early 2-0 lead. With one away and down in the count, Worrell belted his team-leading third home run, a solo blast, to right field. The inning continued with consecutive singles by Ben Newton and Norby putting runners on the corners before Newton scored when Norby was caught in a rundown trying to steal second base.

Jake Kuchmaner (3-0) picked up another win working a season-high five scoreless frames where he allowed four hits, walked two and fanned four. From there, ECU got relief outings from Nate Nabholz (0.0 IP, 1 R), Bradley Wilson (2.0 IP, 1 Ks), Evan Odum (1.0 IP) and Gavin Williams (1.0 IP, 1 K). For Odum and Williams, it was their first outings of the season.

ECU put the game out of reach when it sent all nine batters to the plate in the third scoring five runs on five hits for a 7-0 advantage. Ryder Giles scored the first run when Alec Burleson grounded into a double play. Seth Caddell's RBI single plated Hoover and he later crossed home on a wild pitch. Norby's second hit of the game was an RBI bases loaded single scoring Worrell and Christian Jayne laced one of his two hits plating Newton.

Worrell's second long ball of the game extended ECU's lead in the fifth to eighth, 8-0.

The Panthers finally got on the board in the sixth when Cole Singsank singled home Johnson making it an 8-1 ballgame.

But the Pirates responded with three runs in the sixth and two more in the seventh capping the scoring at 13-1. Zach Agnos' sac bunt scored Jayne and Burleson blasted his first home run of the season, 10th career, with a two-run moon shot to right field plating Hoover in front of him.

ECU tallied a season-high 16 hits getting multiple base knocks from Jayne (two), Hoover (three), Norby (three) and Worrell (2). Burleson, Norby and Worrell each drove in a pair of runs, while Worrell scored a game-high three runs.

ECU returns to action on Wednesday, March 4 when it plays host to Liberty. First pitch is scheduled for 4 p.m. (ET).