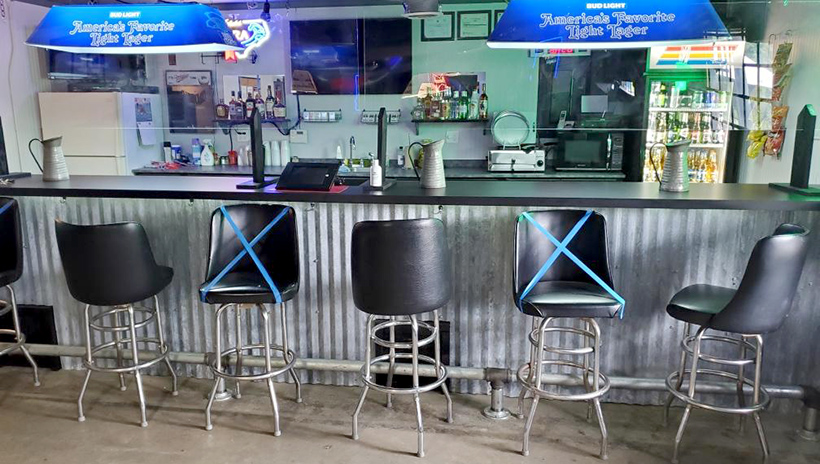 Private bars like Big Daddy's Roadhouse, which make most of their profits from alcohol sales and require a nominal "membership fee" of customers, aren't allowed to reopen. | Photo: Don Carrington/Carolina Journal

Just off North Carolina's Highway 55 sits a tiny biker bar near the line of Wake and Harnett counties. As you're passing by, you'll see a sign out front.

"Big Daddy's Roadhouse," it reads up top. In large, block lettering, a message is spelled out below for all to see. "And yes - your bar misses you too."

On May 22, Big Daddy's Roadhouse taped a copy of Gov. Roy Cooper's Executive Order 141 to its door, added pizza to its menu, cut its seating in half, and opened in defiance of rules that exclude private bars from Phase Two of the governor's plan.

Under Cooper's order, only restaurants - businesses that make more than 30% of sales from food - are permitted to reopen dining rooms at 50% capacity during Phase Two, which began May 22. Some North Carolina restaurants welcomed diners back on premises. Others chose to stick with takeout and delivery orders.

But private bars like Big Daddy's Roadhouse, which make most of their profits from alcohol sales and require a nominal "membership fee" of customers, were left out of the equation altogether.

That didn't sit well with managers like Stephany Storm, who oversees operations at Big Daddy's Roadhouse. When Carolina Journal stopped by the establishment to chat just minutes before the bar's 5 p.m. opening, she was visibly nervous.

"We've been left out," she said of Cooper's reopening plan. "We have no idea what the guidance is."

Storm remembers St. Patrick's Day, when the governor closed all bars to prevent the spread of COVID-19. The state doesn't allow takeout or delivery for cocktails. Establishments like the roadhouse had no option other than to close. Waiting has been unbearable, Storm said. She applied for unemployment benefits from the N.C. Division of Employment Security but was one of the nearly 350,000 still waiting for help. Storm received a $1,200 check from the federal Coronavirus, Aid, and Economic Relief Act.

"That only goes so far," she said.

So, the roadhouse reopened that Friday - paying heed to social-distancing guidelines and serving food to its customers.

The next day, an officer from the Wake County Sheriff's Office forced Storm to close. Unlike others who've been penalized for disobeying the governor's orders, she wasn't charged with a Class 2 misdemeanor. The officer was kind, even apologetic, Storm said. Someone had phoned in a complaint about the roadhouse. Otherwise, the officer told Storm he would've left the business alone.

Like bars, restaurants can serve alcohol to customers who don't buy any food, Storm said. It seems only right, then, that bars be allowed to open.

Many others in the nightlife and alcohol industry feel the same way.

In May, hundreds of private bar and club workers formed the N.C. Bar and Tavern Association. The group was lobbying the governor to modify his executive order, pushing for legislation that treats bars and restaurants, no matter how of their sales come from food. They prepared to file a lawsuit against Cooper.

In one such lawsuit, Senior Business Court Judge James Gale on June 10 issued a decision against three plaintiffs trying to seek a temporary restraining order allowing them to open. Gale said the plaintiffs failed to provide enough evidence to issue an immediate order, although he may consider a preliminary injunction if plaintiffs file additional evidence.

Gale may have been waiting for Cooper to sign the latest iteration of a bill opening bars and gyms, as well as expanding restaurants. The measure, House Bill 594, includes what Sen. Rick Gunn, R-Alamance, calls a "fail-safe," giving the governor flexibility in again closing the businesses should COVID-19 surge enough to overwhelm hospitals. A majority of the 10-member N.C. Council of State would have to agree with such a move. Six members on the council are Republicans.

Cooper, as of press time, hasn't acted on the bill, though it appears he has little appetite to sign it.

When asked at news briefings, Cooper has said he's "reviewing" the legislation. But he's said it's "too early" to relax more COVID-19 rules. He's bristled at attempts to limit his authority.

Breweries, however, which Cooper's order originally seemed to exclude from reopening, won a victory May 21 after the N.C. Craft Brewers Guild called for clarification from the governor's office. Distilleries and wineries, too, were allowed to reopen.

"It's blatant discrimination," Storm said. "It would be a big difference if restaurants couldn't serve alcohol. It would make it a little fairer to bars."