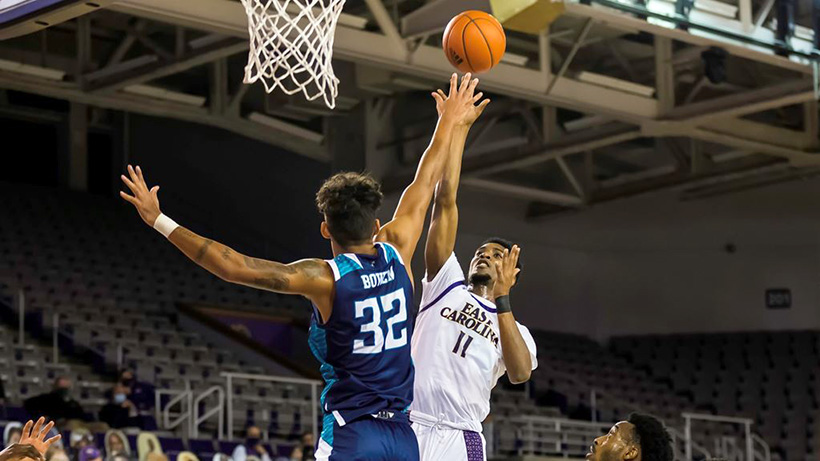 GREENVILLE, N.C.     J.J. Miles had a career-high 22 points and East Carolina outscored UNC Wilmington 15-5 in the extra period to earn an 88-78 win on Monday night.

The Pirates built a 16-point lead in the first half behind a barrage of 3-pointers, drilling 9 of 15 outside the arc. Miles' first 3 of the night ignited a 20-3 run, which included 11 points from Miles.

His fourth 3 of the first half put ECU up 51-35 with under a minute remaining before halftime and the Pirates led by 14 at intermission as UNCW's Joe Pridgen, playing in his first game of the season, scored with 29 seconds left.

The Seahawks (2-2) rallied to take the lead in just over eight minutes, outscoring ECU 20-4 at the outset of the second half going up by two on pair of free throws by Jaylen Sims. UNCW extended its lead to 10, 67-57, as part of an overall 30-6 run in the first 13 minutes.

The resilient Pirates mounted a comeback of their own to force overtime. After Miles' put ECU back on top, 68-67, with a 3, UNCW retook a three-lead setting the stage of Baurti to sink a game-tying 3 with 1:33 remaining. Gardner then scored inside to give ECU the advantage, but Sims' driving layup tied the game with 13 seconds left in regulation and ultimately forced overtime.

In the extra session Gardner took the game over, scoring eight points after having to sit the majority of the first half due to foul trouble. He scored the first basket of overtime and ECU never trailed in the period. The Pirates forced four turnovers in overtime and made 5 of 6 from the field.

Sims had 28 points and seven rebounds for the Seahawks. Jamahri Harvey added 14 points, Mike Okauru had 12 points and John Bowen had a career-high five blocks plus six points and nine rebounds.


"When we were down 10 and it's a wrap, I told our guys there was a lot of people who turned their TVs off and you're going to find out we're not going away. I thought we really fought back and battled back and showed character."
– ECU Head Coach Joe Dooley


"In the first half everything was going good, and then it turned on us. We kept turning the ball over, we get down by 10, but coach kept telling us we could change it. We showed a lot of toughness tonight, we fought back, we forced overtime, and we had a great overtime stretching the lead out and closing it out. That was the craziest game I've been in as a Pirate."
– Jayden Gardner


"As a shooter, and once you see your first one go in, your teammates start finding you in spots. It can go pretty much downhill from there."
– J.J. Miles