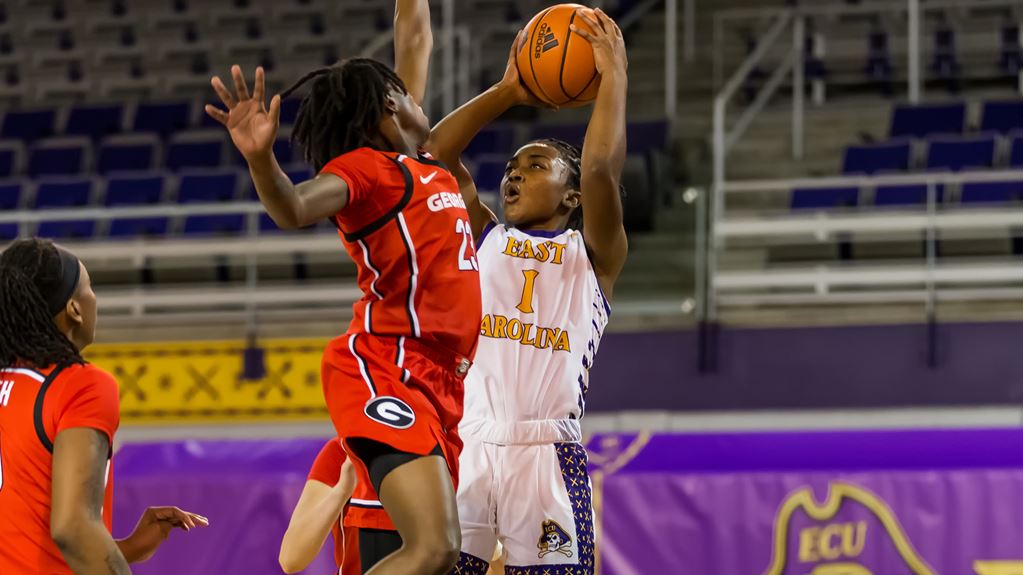 The contest will be streamed live via ESPN+ with Chris Heymeyer (play-by-play) and Brittany Hoyt (analyst) on the call.

The Pirates enter the contest with a 1-3 record after falling 72-47 at Duke Saturday afternoon, concluding a three-game stretch against Power Five opponents. A pair of freshmen led the way in the scoring column against the Blue Devils as guard Synia Johnson netted nine and forward Morgan Moseley dropped a season and career-high eight.

The Pirates are shooting the ball at a .331 clip from the field while averaging 31.8 rebounds, 6.0 assists, 14.3 steals and 2.8 blocks per game. ECU is the current American Conference leader in steals per game and turnover margin.

Scouting VCU     VCU brings a 2-3 overall record to Greenville after falling to Old Dominion 81-76 in overtime Sunday in Norfolk. The Rams have recorded wins over Saint Mary's and Buffalo while suffering losses to Arizona State, Stephen F. Austin and ODU. Tera Reed paces the squad in scoring average at 18.5 points per game but has played in just two contests. Sarah Te-Biasu (13.2), Taya Robinson (12.4) and Madison Hattix-Covington (11.2) are also scoring in double figures while Sydnei Archie is averaging a team-best seven rebounds per outing. As a unit VCU is shooting .377 from the floor while putting up 37 rebounds, 10.6 assists, 9.8 steals and 4.4 blocks per game. Beth O'Boyle is in her seventh season as head coach of the Rams and owns a 108-86 overall record at the institution.

The VCU Series     East Carolina is 14-12 against VCU in the all-time series and has won three of the last five meetings between the programs. The Rams knocked off the Pirates 53-40 last season in Richmond. ECU is 7-5 against VCU in Greenville, but the Rams won the last encounter at Minges Coliseum by a 62-49 margin back on Dec. 7, 2011.

Low Points     The Pirates limited Virginia to just two points in the first quarter Nov. 29. That marks the second time under head coach Kim McNeill that East Carolina has held an opponent to two points in a quarter — the other was the second stanza in a 59-42 win over Tulsa Feb. 19, 2020 at Minges Coliseum.

Creating Havoc     East Carolina ranked second nationally in steals and steals per game as well as third in turnovers forced last year. Early signs indicate that has little chance of changing this season as the Pirates have notched 57 steals and caused 94 turnovers.

Challenge Yourself     East Carolina's run of three-straight games against "Power Five" opponents was the first for the program since the 1994-95 season when the Pirates tussled with then No. 4 North Carolina, Clemson and NC State. ECU would go on to lose all three of those contests.

Up Next     East Carolina begins its seventh season of American Athletic Conference play Wednesday, Dec. 16, when it faces off against SMU in Dallas. A tipoff time for the contest inside Moody Coliseum has yet to be announced.