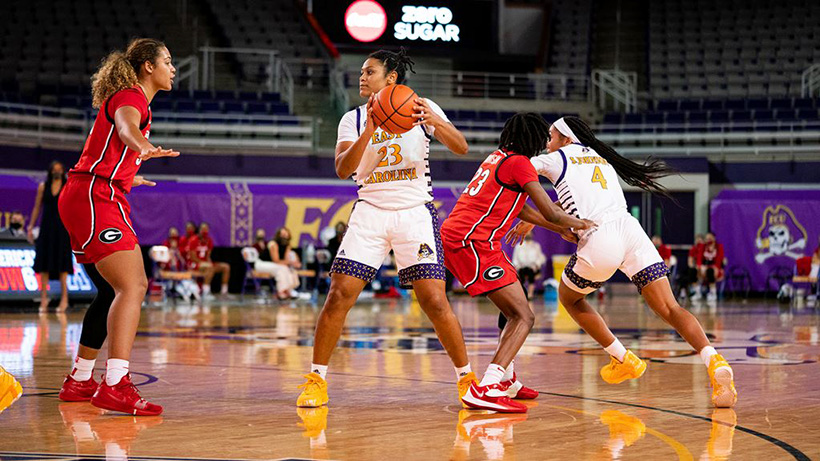 GREENVILLE, N.C.     East Carolina begins its seventh season of American Athletic Conference play Wednesday evening, matching up with SMU inside Moody Coliseum. The contest is slated for a 4 p.m. tip and will be streamed live through ESPN+.

The Pirates take a 2-3 overall record to the Lonestar State, wrapping up non-league action with a 58-55 home victory over Atlantic 10 Conference preseason favorite VCU. Trailing the Rams by six entering the final quarter, ECU out-scored the visitors 16-7 in the final stanza to seal the win. Sophomore guard Taniyah Thompson matched her season-high scoring output with 19 points while senior guard Lashonda Monk chipped in with 11. Junior forward Tiara Chambers stuffed the stat sheet to the tune of six points, eight rebounds and four blocks.

East Carolina is averaging 57 points, 32.4 rebounds, 7.8 assists, 13.6 steals, three blocks and 15.6 turnovers per game, pacing the AAC in steals per game and turnover margin. Thompson and Monk are averaging 11.8 and 11.7 points per outing, respectively.

Scouting SMU     SMU enters American Athletic Conference play in search of its first victory of the campaign. Like the Pirates, the Mustangs played a gauntlet of tough competition during their non-conference slate, falling to Texas, Texas State, Oklahoma State and Arkansas. Kayla White leads the way in the scoring column for SMU, averaging 12.3 points per game, while Reagan Bradley is the team's best statistical rebounder, contributing 6.5 boards per outing. As a team, the Mustangs are averaging 57.8 points, 39.3 rebounds, 10.8 assists, 22.0 turnovers, 7.8 steals and 3.0 blocks per game. SMU is shooting the ball at a 35-percent clip from the field and owns a +0.5 rebounding margin. Travis Mays is in his fifth season as the Mustangs' head coach and holds a 53-74 record at SMU.

The SMU Series     East Carolina is 14-10 against SMU in a series that dates back to 2006. The schools were members of Conference USA together before joining the American Athletic Conference. The Pirates have won five of the last seven encounters, but the Mustangs have captured the last two meetings. ECU holds a 3-6 record when playing SMU in Dallas.

Clutch Against The Commonwealth     East Carolina played a pair of close contests with teams from the state of Virginia in non-conference action, picking up three-point victories over Virginia (54-51) and VCU (58-55).

Challenge Yourself     East Carolina's run of three-straight games against "Power Five" opponents was the first for the program since the 1994-95 season when the Pirates tussled with then No. 4 North Carolina, Clemson and NC State. ECU would go on to lose all three of those contests.

Up Next     East Carolina remains on the road for its second AAC contest, traveling to Ohio Saturday (Dec. 19) for a matchup with Cincinnati at Fifth-Third Arena. The contest is scheduled to tip off at 1 p.m.