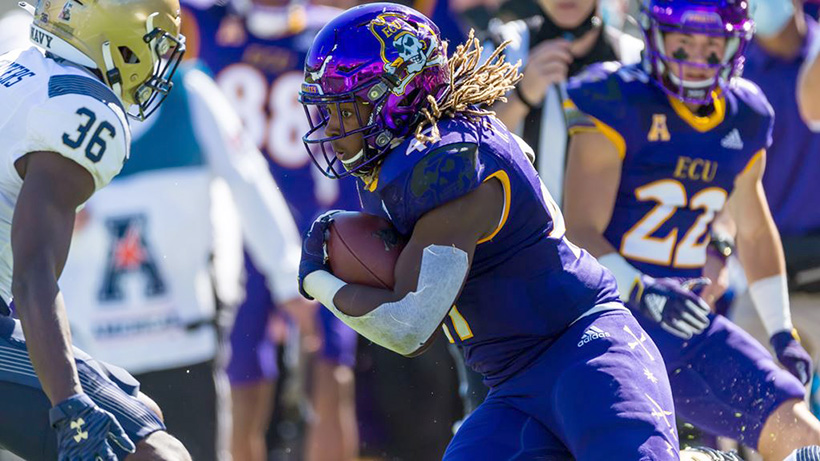 Harris, who is the first ECU true freshman to be named a first-teamer since Travis Williams in 2004, rushed for 624 yards with four touchdowns in eight games where he averaged 4.9 yards per carry and stood third in The American in rushing per game (78.0 ypg). The Duncan, S.C. native ran for 100-plus yards in three consecutive games (115/USF, 172/Navy, 118/Tulsa), becoming the first Pirate running back since Tay Cooper (2012) to reach that standard. His 172 yards against the Midshipmen were the most in a game since Breon Allen racked up 211 yards against North Carolina in 2014, and it was the second-highest ever turned in by an ECU freshman following Scott Harley's 175-yard outing against Temple in 1995. Harris also caught six passes out of the backfield for 31 yards and one score.

McMillian, a two-year starter, picked off a team-best four passes while booking 33 tackles (27 solo) during his sophomore campaign. It marked the second-straight season he led the unit in picks (three in 2019) with his pass thefts against Georgia State, Tulane and his two in the fourth quarter during the Pirates' 52-38 win against SMU. The Winston-Salem, N.C. native booked multiple tackles in eight of nine games in 2020, which included a season-high five on three occasions.

Snead, who earned all-conference honors as a receiver and return specialist, led the team in receptions (53), punt returns and yards (12 for 144), kickoff returns and yards (18 for 409) and all-purpose yards 1,145. He reached the endzone seven times on the year (5/rcv, 1/rush, 1/KOR) and threw for a score in the season finale against SMU. The Raleigh, N.C. native authored a pair of 100-yard receiving games (105/Georgia State, 108/Tulsa) and topped 100-plus all-purpose yards four times, including 231 at Georgia State and 244 at Temple. Snead's lone special teams touchdown came during the second quarter against the Owls when he returned his second career kickoff 95 yards earning him AAC Special Teams Player-of-the-Week accolades.

For the second-straight season, Smith was the top tackler on the team by booking 72 stops, an average of 8.0 per contest to stand fifth in The American. He also led the unit in TFLs (8.0/-30 yards) and pass breakups (six), while ranking second in sacks (2.5/-22 yards). The Stafford, Va. native closed out the season with six stops against SMU, which pushed his current streak to 21-straight games with multiple tackles. Against Navy, he logged a personal-best 15 tackles, marking the fourth time in his career with double-digit stops.