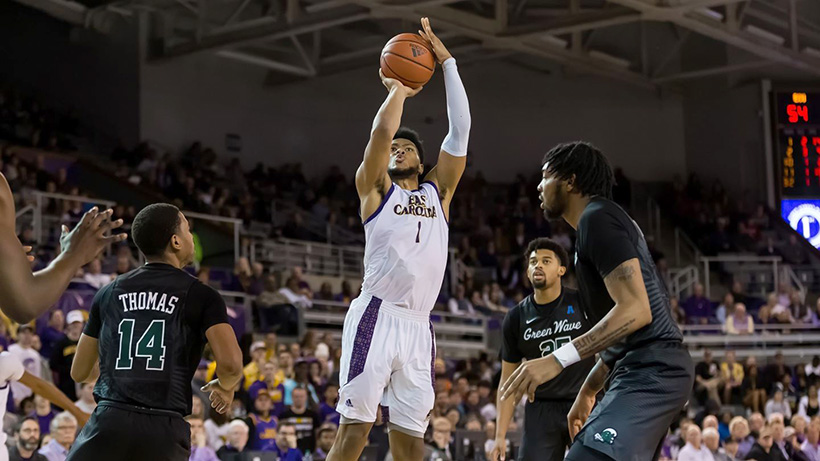 GREENVILLE, N.C.     East Carolina will look to remain unbeaten at home this season when it welcomes Tulane to Williams Arena at Minges Coliseum for a rare weekday afternoon game Tuesday at 3:30 p.m.

Both teams are coming off non-conference wins on Saturday and will look to even up their American Athletic Conference ledgers after each lost their openers Wednesday night.

After dropping its American lid-lifter at SMU, the Pirates scored a 73-64 win over James Madison behind a combined 34 points off the bench from Brandon Suggs, 18, and Bitumba Baruti, 16. Tristen Newton added 14 points on the strength of four 3-pointers and Jayden Gardner netted 13.

Gardner, who leads ECU with 18.1 points per game (ppg) this season, has averaged 18.3 ppg and 8.3 rebounds in four career games against the Green Wave. J.J. Miles is the only other Pirate currently averaging double figures with 10.2 ppg, but missed Saturday's game against JMU due to injury.

Miles made 7-of-9 3s at home versus Tulane last season. Newton averaged 15.5 points in the two games a year ago.

Tulane, who have yet to play a road this season, defeated Grambling State on Saturday after losing at home to Memphis in the conference opener.

Tulane has a pair of players averaging double figures led by Jaylen Forbes at 15.2 ppg followed by Jordan Walker at 13.5 ppg. The Green Wave ranks third in The American in scoring defense, holding its opponent to 60.3 points per game.

East Carolina has won five in row against Tulane and eight of the last nine to take a 15-14 series advantage.