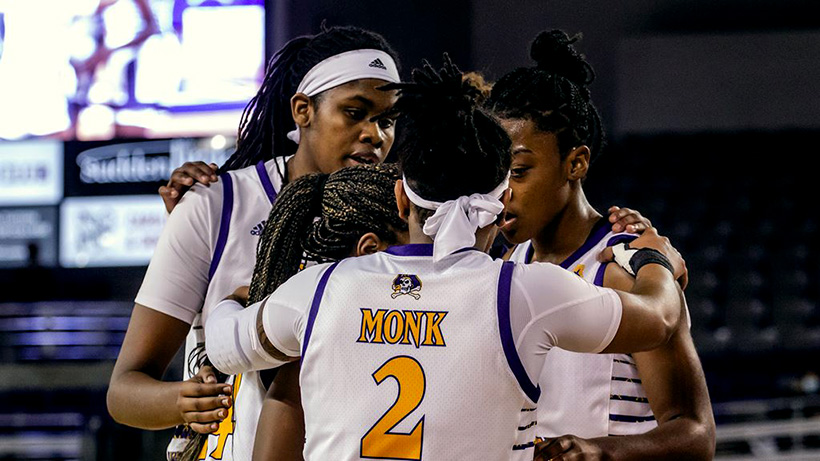 Tipoff between the Pirates and Green Wave is scheduled for Noon and the game will be streamed live via ESPN+ with Patrick Kinas (play by play) and Jay Sonnhalter (analyst) on the call.

ECU kept pace at the top of the league table with a 74-67 win at Cincinnati Sunday. Lashonda Monk, a preseason All-AAC First-Team selection, exploded for a career-high 32 points as well as tallying six rebounds, five assists, four steals and two blocks. Coupled with a 13-point effort in a victory at SMU, she earned AAC Player of the Week honors for the first time in her career. Monk is the first Pirate to eclipse the 30-point plateau in a game since Ariyana Williams netted 34 against Savannah State back on Dec. 20, 2017.

East Carolina boasts four players averaging double figures in the scoring column in Monk (16.0), Sierra DaCosta (10.6), Taniyah Thompson (10.3) and Maddie Moore (10.0). As a team, the Pirates are putting up 58.4 points, 32.1 rebounds, 8.7 assists, 13.4 steals and 3.3 blocks per game while shooting the ball at a 35.3-percent clip from the field. The Pirates currently lead the AAC in both steals per game and turnover margin while also ranking eighth nationally in steals and steals per game as well as 12th in turnovers forced per game and 18th in turnover margin.

Scouting Tulane     Tulane is 4-2 overall and 0-1 in American Conference play, most recently defeating Southeastern Louisiana 70-54 Saturday evening in New Orleans. The Green Wave has played one league contest, dropping a 66-62 decision to UCF back on Dec. 15. Tulane has three players who are averaging double figures in the scoring column — Jerkalia Jordan (15.7), Krystal Freeman (15.5) and Arsula Clark (12.2). Freeman is putting up a double-double, pulling down 10.3 rebounds per outing. As a unit, the Green Wave is averaging 71.5 points, 42.3 rebounds, 14.8 assists, 8.5 steals and 3.5 blocks per game while converting at 41.4 percent from the field. Lisa Stockton is in her 27th season at Tulane and has amassed nearly 600 career victories in 30 years as a collegiate head coach.

The Tulane Series     East Carolina trails the series with Tulane by an 18-8 margin, but has won the last two encounters between the programs — including a 53-50 victory in Greenville last season. The Green Wave has won five of the last seven meetings and the Pirates are 3-8 versus Tulane at Minges Coliseum.

Instant Impact     East Carolina received a boost last week when the NCAA granted immediate eligibility to all Division I transfers. Junior Maddie Moore, a 6-3 forward who joined the squad after two years at UNC Charlotte, suited up for the Purple and Gold for the first time in Sunday's win at Cincinnati and made an impact — scoring 10 points. In her two seasons as a 49er, Moore played in 43 games. During her prep career at Westridge Academy, Moore led the squad to a 32-3 overall record and No. 19 national ranking as a senior.

Signature Defense     After allowing 89 points to Towson in the season opener, East Carolina has done a great job of keeping its foes off of the scoreboard. In their last six games, the Pirates have been limiting the opposition to just 59.5 points per contest. Included in the stretch are three teams from the "Power Five" leagues in Virginia, Georgia and Duke as well as two American Conference opponents.

Playing For A Century     Four Pirates are within striking distance of suiting up for their 100th career games in the Purple and Gold — Justice Gee (98), Dominique Claytor (97), Lashonda Monk (96) and Raven Johnson (93).

Up Next     After a lengthy holiday break, East Carolina returns to action Jan. 2 when it travels to Tampa for an American Conference matchup with the league preseason favorite USF.