East Carolina Falls To No. 21 USF in Tampa | Beaufort County Now | East Carolina went toe-to-toe with No. 21 USF for most of the evening Saturday, but the Bulls mustered a fourth quarter run to pull away for a 71-58 American Athletic Conference victory inside the Yuengling Center.

East Carolina Falls To No. 21 USF in Tampa 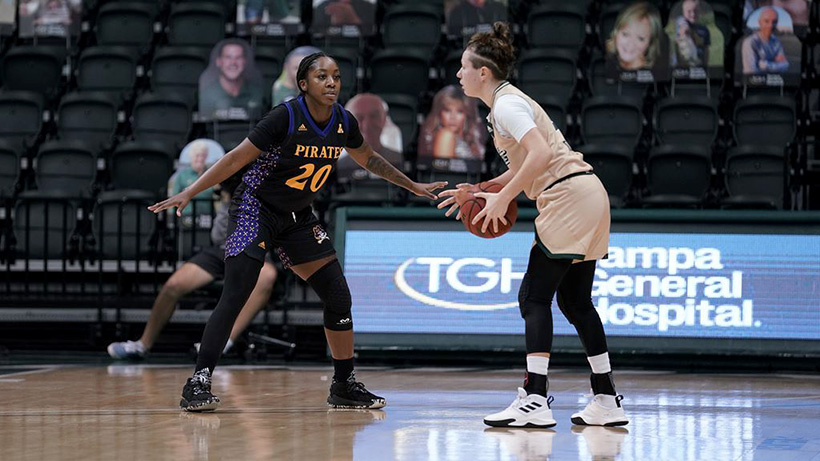 TAMPA, Fla.     East Carolina went toe-to-toe with No. 21 USF for most of the evening Saturday, but the Bulls mustered a fourth quarter run to pull away for a 71-58 American Athletic Conference victory inside the Yuengling Center.

The Pirates (5-4, 3-1 AAC) were searching for their fifth-straight win and first over USF in nine tries, but the Bulls (7-1, 4-0 AAC) hung on to record their sixth consecutive victory and remain unbeaten in league play. East Carolina was much more competitive against USF this go round, dropping their lone meeting with the Bulls by 29 points a season ago.

USF visited the free throw line often in the contest, hitting 28 of 36 attempts, as ECU was whistled for 23 personal fouls. The Pirates ended up hitting three more shots from the field (22-19) but the Bulls out-rebounded East Carolina 48-30 and scored 19 second chance points off 15 offensive boards. ECU shot the ball at a 34.9-percent clip from the field while USF finished at 39.6 percent. The Pirates forced the Bulls into 16 turnovers and grabbed eight steals as well as netting 19 points via those miscues.

It was a tight contest from the start as East Carolina pulled ahead 6-5 midway through the first quarter following a pull-up jumper by Thompson. A triple by DaCosta made it 9-7 in favor of the Pirates at the 4:18 mark. However, USF netted a quick five points and did not relinquish the lead for the remainder of the period — taking a 16-13 edge into the second.

Mununga stretched the Bulls' upper hand to six points early in the next stanza before East Carolina responded with a 5-0 run to draw within one at 23-22 with 5:01 on the clock. A pair of DaCosta free throws afforded the Pirates a 28-27 lead with just under two minutes to go before the half, but USF was able to come up with the final five points of the quarter to carry a four-point advantage into the break.

Mununga and DaCosta paced their respective teams with 12 and 10 points in the first two quarters. The Bulls out-rebounded ECU 22-18 and were 14 of 18 from the free throw line.

East Carolina whittled away at its deficit in the first five minutes of the third period, eventually surging in front by three after a Thompson at the 5:44 mark. A 7-0 run over the next two minutes gave the upper hand back to USF and the Bulls built their lead all the way up to eight before a Thompson jumper left the home side ahead 47-41 entering the final period.

Maddie Moore converted a hook shot to reduce the Pirate deficit to four early in the fourth, but USF rattled off nine-straight points to seize control. A Synia Johnson layup drew ECU within 65-56 with 2:23 remaining. However, that was as close as the Pirates came the rest of the way.

Up Next: ECU welcomes Temple to Greenville Wednesday for an American Athletic Conference showdown inside Williams Arena at Minges Coliseum. Tipoff is scheduled for 6 p.m.
Go Back