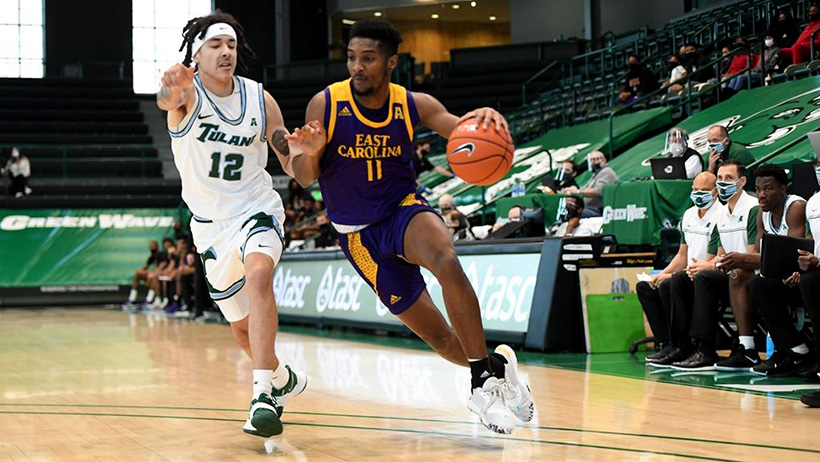 NEW ORLEANS     East Carolina committed a season-high 21 turnovers and shot just 37 percent from the field as Tulane defeated the Pirates 60-56 Saturday afternoon at Fogelman Arena inside the Devlin Fieldhouse.

Jaylen Forbes led a trio of Tulane (6-2, 1-2 The American) players in double figures with 20 points while Gabe Watson had 13 points and Jordan Walker added 10 points. Kevin Cross had seven rebounds.

Brandon Suggs had 14 points and eight rebounds for the Pirates (7-2, 1-2) and J.J. Miles added 11 points. Jayden Gardner, who had 21 points and 10 rebounds in the first meeting of the season, was limited to five points on 1 of 5 shooting with seven rebounds.

"I was very disappointed with the way we played," Pirate head coach Joe Dooley said. "We've got to do a better job of preparing these guys. That being said, when you're minus-16 from the free throw line and minus-14 in the (points off) turnover game, that puts you minus-30. I'm amazed we were still in the game and able to hang around to tell you the truth."

Tulane scored 21 points off 21 Pirate turnovers and made 20 of 23 free throw attempts.

ECU forced just 12 turnovers, which led to seven points, and only made seven trips to the charity stripe where it made six foul shots.

Tulane led wire-to-wire, but it was never able to extend its lead to double figures. The Green Wave's biggest lead came with 13:20 to play as Watson's pull-up jumper gave it a 39-30 advantage.

Twice the Pirates got within a single point but were never to hurdle Tulane for the lead.

Miles made it a one-point game, 51-50, with 1:37 to play, but Tulane's Sion James answered with a 3-point on the ensuing possession 26 seconds later.

"We were right there," Dooley said. "We had every opportunity. They made some plays to keep us in the game also. James hitting that 3 from the corner was a big shot. We had it down to one and he hadn't made one on the season, and he made the shot. It was a big play in a late clock situation. But to turn the ball over like we did, and the way we turned it over, we haven't done that all season."

Needing points on its following possession, ECU turned it over and Walker began his parade to the free throw line, making 6 of 6 foul shots in the final 35 seconds.