Biden admits he does not know what he's doing 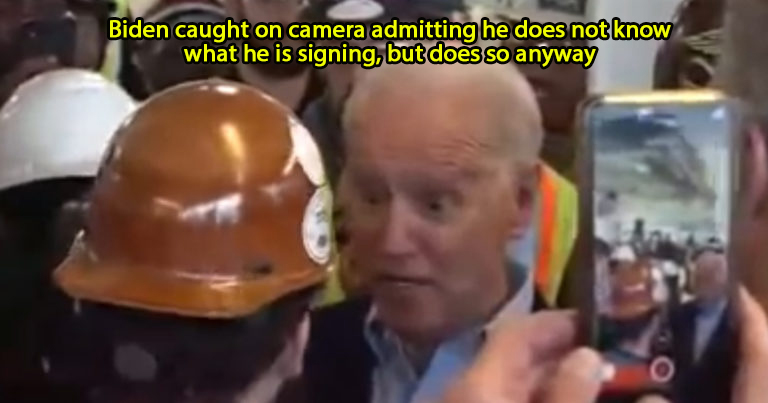 This is scary.  Very scary…

Joe Biden said “I don’t know what I’m signing” on camera as he proceeded to sign an unknown executive order. In the video posted to BitChute, an unidentified person told him to “sign it anyways.”

This comes amid nationwide concerns over Biden’s apparent cognitive decline.

The video shows Biden, without a note of humor, say that he has no idea what executive order he is signing. Another person then gestures toward Biden’s left hand.

The this is not the first questionable situation we’ve seen in the first three days of the Biden administration. As seen in another video on Inauguration Day, Biden robotically stated aloud “Salute the Marines” as he and his wife Jill entered the Capitol. Biden never actually saluted the marines, as National File reported.

“The awkward interaction appears to have been prompted by someone communicating with Biden via earpiece,” National File reported. “Which has become a staple of the 78-year-old Biden’s public appearances due to numerous gaffes and instances of erratic behavior.”

In another puzzling video from the Biden White House on Wednesday, an unidentified individual was seen talking about a “plea sentence” before the audio immediately cut off. Since then, the video has been unlisted from the official White House YouTube channel, as National File reported.

“In the YouTube video, which has since been unlisted by the official White House channel so only users possessing a link to the footage can view it, the bizarre audio exchange happens roughly one hour and 16 minutes into the press conference.

As Biden continues to drone on about his COVID team appointments, an unidentified male voice cuts in and says, “So just so you know my life, after waiting to do this, I just agreed to a plea sentence for [unintelligible] guy…”

As many blame Biden’s “stutter” for his increasingly frequent gaffes, the nation is left wondering exactly what Biden meant when he said he would “lead an effective strategy to mobilize trunalimunumaprzure” if he were elected President of the United States.

Source:  HOT MIC: Biden Says 'I Don't Know What I'm Signing,' Signs Executive Order Anyway - National File where you can watch the videos referred to above.

Hat tip to Buzz Cayton for sending us this link.