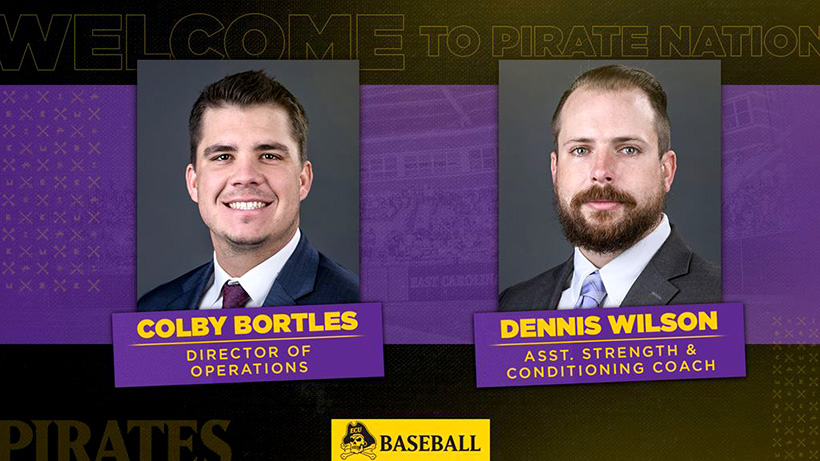 Bortles and Wilson both began their duties in January of 2021.

"We are very excited about the addition of Colby to our baseball staff," Godwin said. "It is always special to have a former player, who I coached at Ole Miss, want to be a part of our program here at ECU. Colby is a great person, great worker and brings great knowledge for what it takes to win at the highest level. He will help make the P.I.R.A.T.E.S. 1% better daily."

In his current role, Bortles will handle a variety of administrative duties, including team travel, game-day logistics, special events coordination and community outreach efforts with the Pirate program.

Prior to coming to Greenville, Bortles served as the volunteer assistant coach at Charleston Southern following the 2020 season. While at CSU, he worked with the Buccaneer hitters and infielders on a daily basis.

As an assistant hitting coach at Rollins College from June 2019 to February 2020, Bortles controlled the in-game hitting approach with the offense as well as the outfield defensive alignment. Prior to jumping into the coaching ranks, he spent three years in the Detroit Tigers' organization (2017-19) after being selected in the 22nd round of the 2017 Major League Baseball Draft.

A Dean's List member, Bortles earned his bachelor of science degree from Ole Miss in criminal justice in May of 2017 with a minor in parks and recreation.

"I am also excited to announce Dennis as our new baseball strength coach," Godwin added. "He has already brought tremendous knowledge, energy and work ethic into our program. We are looking forward to watching him mold our baseball players and other ECU athletes into being the best versions of themselves."

Wilson will be responsible for designing and implementing yearly-individualized programs for Pirate Baseball, which includes various workouts for starting pitchers, relievers, and back of the bullpen players. Similarly, he overseas specific training for everyday players with regard to the positions they play. While on the road, he will play a vital role in making sure that the athletes have everything they need to recover from the previous day games/workouts.

Additionally, Wilson will also spearhead the design and implementation of comprehensive strength and conditioning training for the women's soccer team.

He returns to his alma mater after spending the last two and a half years as the Sports Science Coordinator and Internship Coordinator, as well as overseeing continuing education efforts for the Florida Atlantic University Olympic Strength & Conditioning staff. He also worked directly with the baseball, men's golf, women's golf, and women's tennis programs.

Prior to joining FAU in August of 2018 as an assistant strength and conditioning coach, Wilson worked at and earned his master's degree in kinesiology from Dallas Baptist while working with the baseball team along with the men's tennis, men's golf, and men's track and field programs.

Wilson spent three months at the University of Maryland as an intern working with Olympic sports. An alumnus of East Carolina, he earned his bachelor of science degree as a health fitness specialist. As an undergraduate, he assisted with football and all Olympic sports and was awarded an academic scholarship in the ECU Honors College. During his time as an undergrad, he led and published a research study on the effect of Post-Activation Potentiation on Division I Athletes.