Late Goal Sinks East Carolina in Season Opener | Beaufort County Now | East Carolina battled Old Dominion to a scoreless deadlock for most of its season opener Thursday evening, but the Monarchs tallied the game's only goal in the final 20 minutes to come away with a 1-0 non-conference victory at the ODU Soccer Complex. 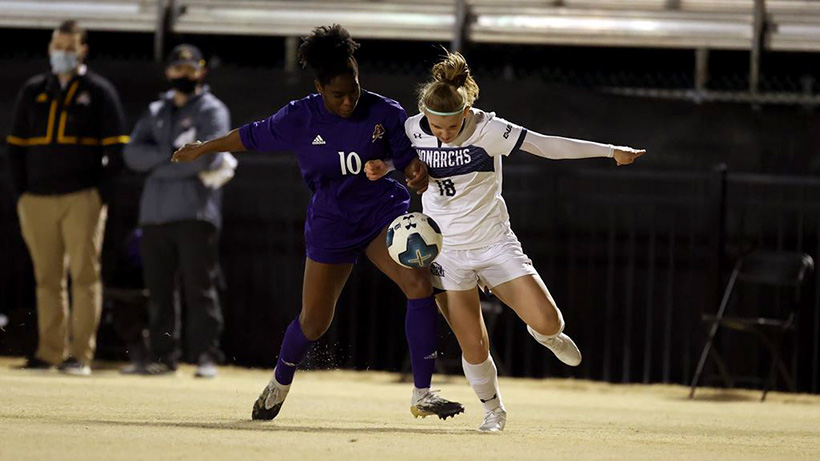 NORFOLK, Va.     East Carolina battled Old Dominion to a scoreless deadlock for most of its season opener Thursday evening, but the Monarchs tallied the game's only goal in the final 20 minutes to come away with a 1-0 non-conference victory at the ODU Soccer Complex.

The Monarchs (1-0) outshot the Pirates (0-1) by a 7-2 margin and enjoyed a 4-3 advantage in corners. ECU committed 11 fouls to ODU's six and did not force Monarch goalkeeper Kasey Perry into making a save.

"It was good to get out there after so long without being able to compete," head coach Jason Hamilton said. "It gave us a lot of things to look at and work on for the upcoming week.

"This was good for us to get game fit. We have some players coming off injuries and there is no better way to get your legs back then being out there in a meaningful game. It was a hard, physical match and a good introduction to college soccer for some of our younger players. There were some things we saw that we are pleased with and of course some that need to improve before the next game."

The match got off to a slow start as Old Dominion recorded the first shot by either squad almost 13 minutes into the proceedings. English was up to the task though, eventually saving both of the Monarchs' attempts to keep it scoreless at the halftime interval. East Carolina was unable to muster a look on net as the squads combined for 11 fouls in a rather uneventful first 45 minutes.

Tori Riggs created the Pirates' first shot of the night about six minutes into the second half, but it was blocked. Catherine Holbrook's attempt at the 63:02 mark was also blocked away.

ODU took the lead in the 72nd minute when Emily Garrick took a pass from Yuliia Khrystiuk and slotted the ball past English. That would be enough for the Monarchs to see out the remainder of the clock without allowing ECU a look on goal.

"I thought our back line and goalkeeper did well," Hamilton added. "We know we are strong defensively. Getting some players back in form will hopefully help us in the attack going forward."

Up Next: East Carolina jumps right into American Athletic Conference play with a home contest against Houston Feb. 13 at 5 p.m. The match will be streamed live via ESPN+.
Go Back