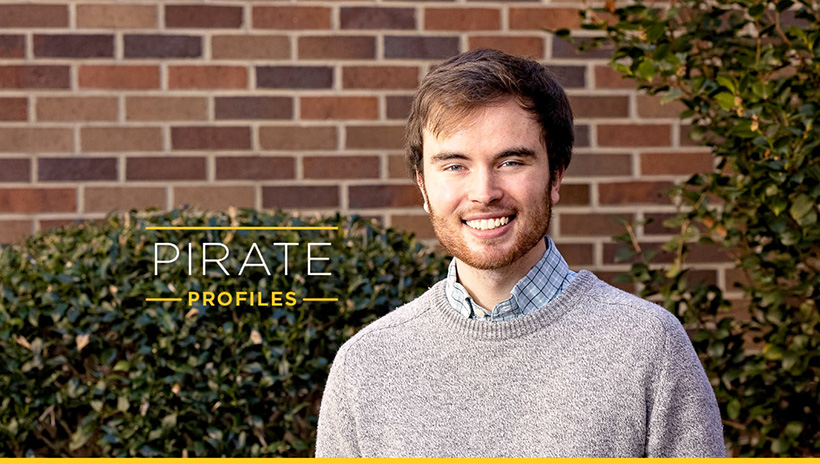 Music has always been a part of Evan Martschenko's life. The East Carolina University junior started thinking about turning that interest into a career while he was in high school.

"I had been playing in my middle school band, and I decided to take a music theory class in my first semester of high school," said Martschenko, a Cary High School graduate. "My teacher, Ed Yasick, was beyond phenomenal, and I fell in love with not only music but with the environment of a music theory classroom. I started teaching myself piano, but most importantly I started listening to any music I could get my hands on, completely immersing myself." 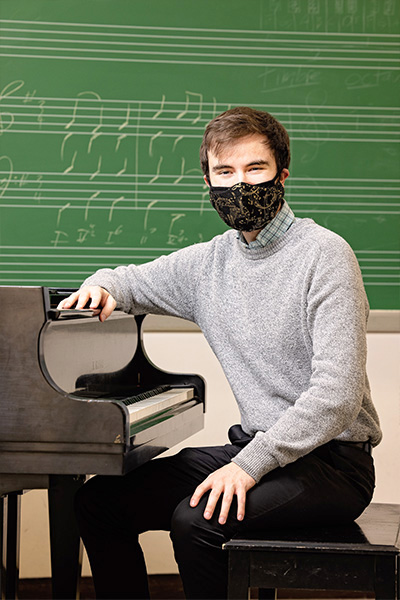 Evan Martschenko plans to teach music theory to college students.
When he began looking at colleges, ECU stood out.

"The School of Music at ECU is recognized as one of the finest around the region," he said. "Above all else, the faculty is what drew me to ECU. My professors are knowledgeable, dedicated, caring and, of course, wildly talented. The music school gives a lot of us the feeling of a conservatory while still attending a university." Martschenko is studying music theory and composition. After graduation, he plans to earn master's and doctoral degrees with the goal of teaching music theory to college students.

"Music theory is the act of analyzing and understanding music, and it is something that every music major or professional musician comes in contact with in some form," he said.

While at ECU, Martschenko has been involved in several ensembles, organizations and opportunities including the Music Theory Tutoring Lab, the ECU Chamber Singers, the NewMusic Festival, Collegium Musicum, ECU Opera Theater, the Society of Composers and UnCaged, a 20th century music improvisation group.

Off campus, he has frequently accompanied area vocalists, instrumentalists and choirs, and taught piano lessons.

Unfortunately, those groups and activities have been heavily altered or canceled because of the coronavirus pandemic. Musicians have been particularly hard hit, and not just financially, Martschenko said.

"Our incomes require us to perform for others or teach others, and music does not translate well over Zoom, though we have tried," he said. "But beyond that, there is a huge part of my soul that I feel has been absent since March. I used to frequently have people over to my house to have jam sessions or read through music together because it is what we honestly and truly enjoyed doing — it's not just a day job for us."

And while it has been difficult to temporarily sideline a substantial part of his life, it has been necessary, he said.

"Music is about acceptance, about connecting with listeners, and about sharing human emotion and love, and there is no better way to express that than keeping ourselves and those around us as safe as possible — even if that means putting the music on hold," Martschenko said.

One bright spot has been his ability to continue serving as music director at Gold Point Christian Church in Robersonville, about 30 minutes from Greenville. Every Sunday, while wearing a face mask, he performs a special piece on the piano and plays and sings hymns with the congregation. "I truly believe that everyone that sings with us has as much to show me musically as I have to show them," Martschenko said.

What advice do you have for other students?
Never be afraid to try new things and never overwork yourself.

What is something cool about ECU that you wish you knew during your first year?
Go look at the clock tower right at midnight!

Your words to live by:
"Music is enough for a lifetime, but a lifetime is not enough for music." — Sergei Rachmaninoff
Go Back