Was Rush Limbaugh done with conservatism? | Beaufort County Now | Indications are he was moving in recent months toward right-wing populism

Was Rush Limbaugh done with conservatism? 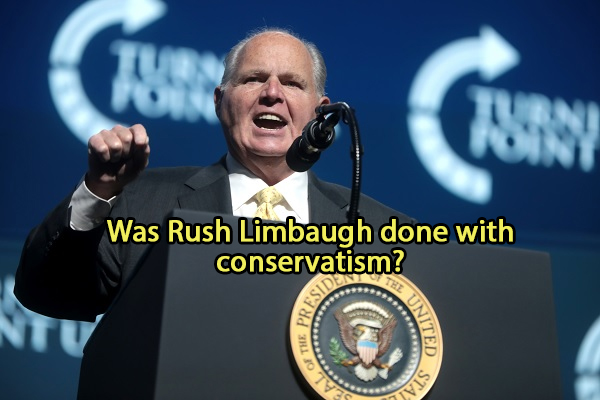 In a trail of observations that began with Trump's campaign in 2015 and peaked during the last year of his life, the late Rush Limbaugh, as he was in and out of the studio battling cancer, was on a path to the previously unthinkable.  He was ready to let go of the ideology he'd spent three decades promoting — Reaganite conservatism — and replace it with right-wing populism. Specifically, the right-wing populism of the just-defeated Republican president. Why?

Limbaugh, the self-proclaimed "mayor of Realville," was constantly trying to see around corners.  What he saw was a political movement that offered more staying power and strength against the left than the ideological one he'd been associated with since 1988.  That calculus wasn't based on election outcomes.  It was informed by the first Republican voter realignment to occur since Reagan's election.  Here is how Limbaugh described it in the days after Trump's Republican convention speech on the White House South Lawn last year:

Limbaugh never missed the chance to rib what might be called Cruise Ship Conservatism.  As an entertainer with a massive following, he found it ridiculous that other media personalities would cultivate the small-time celebrity role.  But "elitist think-tank denizens" was a stand-in for the country club set, too.  With a small-town upbringing and blue-collar audience, Limbaugh relished the idea of his being "the party of the little guy."

Limbaugh realized that right-wing populism was more appealing than conservatism to the little guy.  This was a counterintuitive conclusion for a movement conservative like him to reach.  The Reagan coalition was heavy on union members and other disillusioned Democrats.  But for all its success through the 1980s, it didn't survive the end of the Cold War, something Limbaugh would rue for the rest of his life.  He even took it personally.  This was his response just six weeks ago to one of the many listeners who called in to credit him with the listener's political conversion:

You know, I'm not gonna sit here and deny that.  But, folks, I gotta tell you, there's a large part of me that feels like I have failed in such a major way, in a political sense.  I've had 30 years here to try to convince people, to try to persuade people, to try to encourage people to think — critically think — on their own, to realize the difference between conservatism and liberalism, the difference between the Republican Party and the Democrat party as it relates to conservative versus liberal.

This was a lament not that conservatism has lost to liberalism, but that most people weren't voting by ideology in the first place.  He recognized over the Obama and Trump years that voters are situationally rather than ideologically oriented.  Along the way, in a conversation with me in April 2016 for his Limbaugh Letter, he recounted a lunch with Ted Cruz ahead of that year's Republican presidential race.  Limbaugh warned the conservative hopeful that most of his own 25-million-member audience didn't even identify with the conservative movement.

My message in conversation with Limbaugh was that conservatives could use Trump's success to achieve big ideas, a thought that was considered unconventional at a moment when many Republican leaders dreamed of sabotaging Trump's nomination.  But even that prediction proved shortsighted.  Trump would remake the GOP.  By 2020, it had changed from a conservative party to a right-wing populist party.

Is the difference between conservatism and right-wing populism really more than just nuance, or the presence of Trump?  After all, conservatism won with a populist coalition under Reagan.  And much of Trump's agenda from tax cuts to deregulation to judicial nominations came straight from the conservative playbook.

A look under the surface of these outcomes shows fundamental differences.  Using my mentor the late Jeff Bell's definition of populism as "optimism about people's ability to make decisions about their lives" (from his 1992 book Populism and Elitism), it's clear that a reckoning was coming once the foundations of postwar American politics collapsed.

Conservatism demands an allegiance to institutions rather than to a public.  For powerful conservatives, it could be whatever institution they called home, whether that was the U.S. Senate or a magazine that took subscribers on cruises.  Limbaugh, like Trump, was never part of an institution that needed to be conserved.  Each owed his platform to massive consumer followings that presaged the rise of digital media.  Eventually, those and all the other followings that formed the public superseded institutions in politics.

Until that happened, elitism, which Bell defined as essentially the opposite of populism — "optimism about the decision-making ability of one or more elites, acting on behalf of other people" — had not yet outlived its usefulness.  Cold War presidents were on average several years older and better credentialed than their predecessors.  Public trust in the media was strong.  White-collar bosses often lacked college degrees like their employees.  The economic power of any one set of elites was limited in pre-internet times by regional geography.  Elites and ordinary people related relatively well with one another.

Limbaugh came of age politically under the three-legged stool conservatism that Reagan had cultivated out of post–World War II America.  It was a challenge to the liberal-moderate consensus on economics, social issues, and foreign policy of the earlier Cold War years that was itself the reaction of both parties to the four presidential elections won by FDR.  Postwar conservatism called for an ideological change of American positions on various issues, not class-based change.

Conservatism won the Cold War but struggled to find traction in peacetime.  The 1990s conservatism that Limbaugh is closely associated with is now most remembered as an effective check on Bill Clinton.  George W. Bush was re-elected during wartime in 2004 as a legacy conservative, but Reagan revivalism was finished off by the 2008 financial crisis.  So was the political momentum of elitism.

Bell lamented two decades after the publication of Populism and Elitism that the book had mainstreamed the concept of elitism in American politics but not populism.  He only had to wait a few more years for vindication in 2016.

What changed?  Was it when management jobs finally ran out for the uneducated?  Was it when the technology revolution consolidated corporate power after manufacturing jobs has been offshored?  Or was it when broadband internet allowed voters to instantly scrutinize politicians, and smartphones enabled them to become informed by one another rather than just by media elites?  Former CIA analyst Martin Gurri in his book's title calls this technologically-driven redistribution of elite and populist power The Revolt of the Public.

Suddenly, a Republican frontrunner was winning primaries in rich and poor ZIP codes alike by trampling on the reputation of every party leader who had come in Reagan's path.  A party that had a tradition of giving its presidential nomination to the previous runner-up and been respected for its conservative institutional pedigree was now up for grabs.

What would Limbaugh do?

Contrary to popular framing, Limbaugh and Trump were not friends before 2016.  Limbaugh's decision to back Trump's hostile takeover was the result of methodical analysis.  His radio program in the Trump years became a search for the political movement that respected conservatism while acknowledging that it was essentially over as we knew it.  As Limbaugh said on that show after Trump's 2020 convention speech:

You know the old concept of conservatism might have gone into the chasm, too, 'cause it's time to maybe rethink how conservatism's existence is going to evolve and how conservatives mature into whatever this new party is.

Limbaugh had forever demanded, especially after Republicans lost presidential elections, that the party accommodate conservatives, not the other way around.  Yet there he was, saying conservatives had to "mature" into their party.  But it wasn't the party establishment he was referring to this time; it was a "new party" of the same name but changing voters — blue-collar but also multiracial, nationalist, and consumerist.

Unlike the white professional class that underpinned the post-Reagan Republican coalitions, these voters weren't deluged by left-wing programming in offices or college classrooms.  Their detachment from the four institutions most captured by the left — corporate America, academia, mainstream media, and mainline Protestantism — made them valuable holdouts to the critical theory version of liberalism sweeping the culture in 2020.  They were more likely to be anchored on the right wing of populist appeals than the left wing.

If this was true, it had the makings of a durable Republican realignment that could outlast even its standard-bearer president.

Limbaugh claimed that he knew the left better than anybody.  It seems likely he concluded that liberalism with its ambition to politicize everything could not be contained by conservatism.  It was not a fair fight.  Conservative critics have said Limbaugh became darker in the Obama and Trump years.  In the moments when that was actually true, it was a recognition of this reality that they didn't have.

Limbaugh also knew there are many more conservative voters than liberal voters, even though conservatives sometimes voted for liberal candidates because they voted situationally rather than ideologically.  Right-wing populism held the potential to turn latent conservatism into reliable Republican voting.

The only way Limbaugh complained about his terminal illness during the last year was that it threatened doing what he loved every day — demystifying politics for his audience.  That role must fall to others now.  But Limbaugh left behind enough clarity to see beyond the horizon —  to see how far a realignment from conservatism to right-wing populism could take this new Republican Party.