Test scores of NC students show the hurt from closing the schools | Beaufort County Now | It was not necessary and all the extra money did not matter. Somebody tell the Governor! 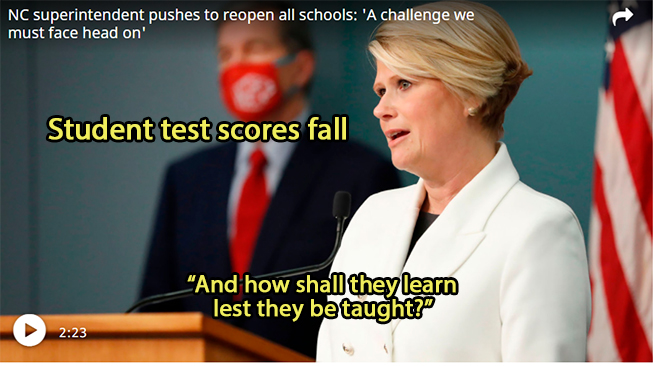 The News and Observer is reporting:

Two differing views were presented Wednesday on how worried North Carolinians should be about low student test scores during the coronavirus pandemic.

Test results shared Wednesday with the State Board of Education and state lawmakers show that the majority of high school students did not pass state end-of-course exams given in the fall. In addition, school districts are reporting that 23% of their students are at risk of academic failure and not being promoted at the end of the school year.

State Superintendent Catherine Truitt told the state Senate Education Committee the results show that more needs to be done to get students back for daily in-person instruction. Most of the state’s 1.5 million public school students have received either no or only limited in-person instruction since March 2020 due to COVID-19 restrictions on schools.

“It’s been a lost year of learning,” Truitt, a Republican, told the committee.

Truitt says the pandemic has exacerbated learning gaps that were in place before COVID-19.

But state Department of Public Instruction staff members cautioned the state board and the public against comparing this school year’s test data with past or future years.

“To go from a face-to-face model that had been in place for decades to go to this model this year, this blended learning environment, is quite an accomplishment that we were able to do it all. And we have to look at these tests results within that context,” said Tammy Howard, director of accountability services at DPI.

The results offer the first statewide look at how students are doing academically during the pandemic.

In December and January, high school students across the state took end-of-course exams in biology, English 2, Math 1 and Math 3. Students had to take the exams in-person, even if they were taking all classes online.

The majority of students failed the Math 1, Math 3 and biology exams.

▪ Only in English 2 was there any improvement. This year, 41.4% of students were not proficient compared to 42% the prior fall.

The test data also show that the majority of third-grade students who took the beginning-of-grade reading exam scored at the lowest level and that three quarters aren’t proficient in reading.

“We shouldn’t be overreacting, but we should be concerned,” said state board member J. Wendell Hall.

The state gave flexibility this school year for when students could take the end-of-course exams and the beginning-of-grade reading tests.

“A usual takeaway from a decrease or an increase in test scores is that perhaps not everything was done that could be done,” Howard said. “But in the context of this year, I think everything is being done and this information kind of grounds us as to where we are to have conversations about where we need to go in providing support and services.”

Due to the pandemic, state lawmakers wanted to know how many students are at risk of academic failure. It was 23% in school districts and 9% among charter schools.

It’s the first year the at-risk data was collected, according to Jamey Falkenbury, director of government affairs at DPI. He said schools hope to lower the percentage by the end of the school year.

At the legislative committee meeting, Truitt spoke in support of a GOP-backed bill that requires school districts to offer in-person instruction to all students and daily in-person classes to special-education students.

The Senate fell one vote short on Monday of overriding the veto. But the Senate will attempt again to override the veto.

“Remaining in Plan B is worse than the slight risk of having all students, including grades 6 through 12, in school five days a week for in-person learning where it is possible to do 3 feet of social distancing,” Truitt said.

Some groups have urged suspending standardized tests this school year because of the pandemic. The exams were suspended last school year.

But last week, the U.S. Department of Education announced that it would not give testing waivers this school year. Federal officials say that the tests are needed so that both schools and parents can see how students are doing.

The federal Education Department will give states more flexibility in how the exams are given, including shortening them and offering them remotely.

Howard said the exams can’t be made any shorter if they’re to remain valid. She said letting the students take the exams remotely also isn’t feasible.

“Remote administrations, we’ve had many conversations about that over the past several months, and the end conclusion was that was not feasible, as well, due to security of the test administrations,” Howard said.