Is the World Running Out of Resources? | Beaufort County Now | In 1798, British economist Thomas Malthus published An Essay on the Principle of Population.

Is the World Running Out of Resources?

In 1798, British economist Thomas Malthus published An Essay on the Principle of Population. In it, Malthus hypothesized that as the population grew, earth's resources would become increasingly scarce, leading to the elimination of large swaths of the population by way of war, plague, or starvation. Not a rosy picture.

His incorrect calculations initially propelled calls for limiting population growth by way of abstinence and birth control in hopes of avoiding literal civilizational collapse. Yet, over a century later they would also inform the work of Margaret Sanger, the face of the American abortion movement. Ideas have consequences, and bad ideas have victims.

Fast forward to 1981 when economist Julian Simon published The Ultimate Resource, utterly undermining Malthus and Company's thesis. Simon argued, "that humans were intelligent beings, capable of innovating their way out of shortages through greater efficiency, increased supply, and the development of substitutes." The earth's population has increased by over 73% since the time Simon's book was published and it is clear that material abundance isn't slowing down anytime soon. Gratefully, Malthus' miscalculation was wrong by orders of magnitude. 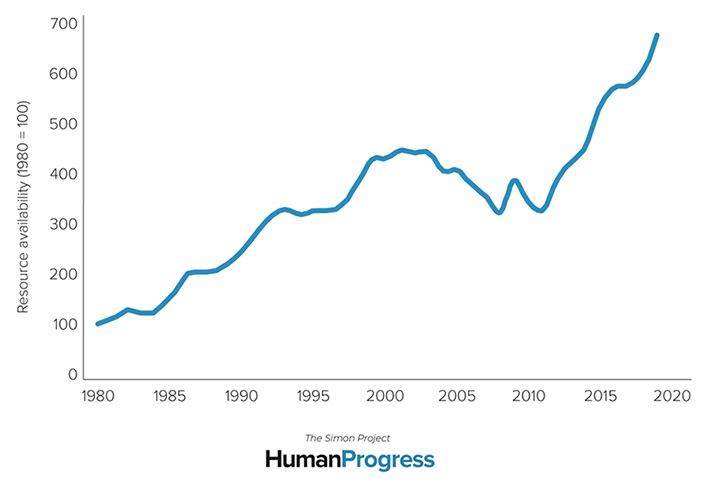 Growth in resource availability between 1980-2019

As you can see, availability of resources has increased exponentially over the past four decades. In fact, the earth was 570.9% more abundant in 2019 than it was in 1980! Why is that? Julian Simon argued that an increase in population beget an increase in ingenuity and innovation. The most valuable resource we have is that of human capital.

Malthusianism at the movies (spoiler alert): I can't let this little soliloquy end without recommending you watch or rewatch Avengers: Infinity War with fresh eyes. When I watched it a couple of years ago, Thanos' behavior (Thanos is the chief antagonist) reminded me of the bankruptcy of Malthusianism, as Thanos' misguided desire to destroy half of the population was driven by a belief that there weren't enough resources to sustain the current population. This article on FEE does a good job of explaining it.
Go Back