Pirates Fall Short Against No. 17 USF | Beaufort County Now | A long-range goal proved to be the difference as the ECU soccer team fell 1-0 to the No. 17 USF Bulls on Sunday afternoon inside Johnson Stadium.

Pirates Fall Short Against No. 17 USF 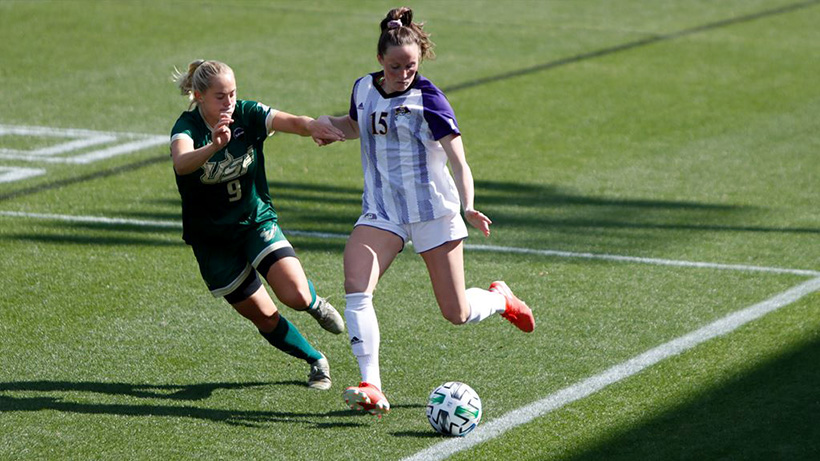 GREENVILLE, N.C.     A long-range goal proved to be the difference as the ECU soccer team fell 1-0 to the No. 17 USF Bulls on Sunday afternoon inside Johnson Stadium.

"Overall, I was very happy with our performance today or as happy as you can be without getting a result," said head coach Jason Hamilton. "USF is a very good team and you have to do enough to keep yourself in the game and then hope a bounce or two goes your way."

With both teams among the best defensive squads in the conference, goal-scoring chances were not going to be abundant. That proved true in the opening 45 minutes. USF took 11 shots in the first half, but just two were on goal, with ECU getting blocks on three of the others.

"This was definitely the most complete game we have played all year," Hamilton said. "Now it is figuring out how to be more efficient in front of the goal. I thought we left some chances out there."

The Pirates were the ones who created the best chance of the first half. Catherine Holbrook rose up for a header that had USF's goalkeeper, Sydney Martinez, beat but a USF defender was able to block it momentarily. The rebound fell to Tori Riggs and she tried a second shot, but Martinez recovered to smother it.

In the second half, the intensity of the game began to ratchet up as neither team wanted to be the one to give up a goal. However, as the second half wore on, opportunites began to appear for both teams to score. In the 76th minute, Vivianne Bessett took a long range shot for the Bulls that forced ECU goalkeeper Maeve English to make a save. Less than a minute later, Erin Mikalsen got free in the USF box, but her shot was blocked by a defender.

Finally, in the 84th minute, USF found the breakthrough. Fanny Pelletier-Laroche collected the ball near the midway line and sprayed a pass towards Meghan Cavanaugh on the left side of the field. Cavanaugh lined up a shot from nearly 25 yards out and her effort found the upper left corner of the goal to narrowly beat a diving English and open the scoring.

ECU poured forward over the final six minutes looking for an equalizer, but could not get a shot on target in the closing stages.

USF finished with an 18-6 edge in shots, but just a 5-1 advantage in shots on goal and a 5-3 lead in corner kicks. English made four saves in the goal for the Pirates while Martinez had one stop for the Bulls.

"We were most happy with how we competed," Hamilton finished. "That was the theme this week, being more competitive. We have to match or be better than our opponent when it comes to how hard we work and outside of the Houston game, this game was the best we did at that. Now we have to build off this game and continue to grow."

East Carolina will be back in action on March 14 when the Pirates head to Orlando to take on UCF. That game is scheduled for a 1 PM, start and will be broadcast on ESPN+.
Go Back