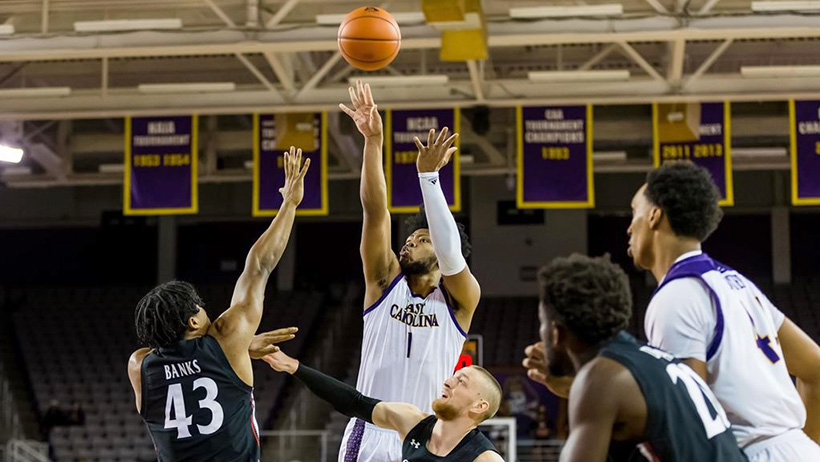 With the loss the Pirates drop to the No. 11 seed in the American Athletic Conference tournament and will face No. 6 UCF in the first round on Thursday, March 11, at 7 p.m. ET. Cincinati will be the No. 5 seed and take on fourth-seeded SMU in the quarterfinals on Friday.

Madsen made 5-of-9 3-pointers and was 6-of-11 shooting overall en route to posting a career-high scoring total.

The Bearcats broke open a close game with eight minutes remaining as they scored nine points in 45 seconds to turn a two-point lead into an 11-point advantage, 64-53. Williams knocked down a 3 followed by Eason converting a 3-point play and Madsen making his third 3.

Davenport followed with another Bearcat 3-pointer to cap the run and give UC a 67-53 lead. Cincinnati's lead reached 18 with 2:31 to play scoring 11 unanswered points after ECU pulled within seven, 67-60, with 5:32 remaining.

Jayden Gardner led the Pirates with 23 points with Tristen Newton and Brandon Suggs scoring 13 points each. Suggs also had a game-high eight rebounds.

ECU trailed for the first 13 minutes of the game before JJ Miles sank a 3-pointer from the corner to give ECU a 28-25 lead with 6:31 remaining before halftime.

POSTGAME QUOTES     "Our offensive ineptness has put our defense in trouble. You can't score and every time it puts so much pressure on your defense. We came out of the halftime and we knew they were going to throw the ball to the big fella, and we give up a layup. We sort of eased back into it, but we do need to make some shots. A lot of it is timing and a lot of that is repetition. We'll try to do that the next couple of days." –ECU Head Coach Joe Dooley

"We've just to keep working and get past these things. Just next shot, next shot mentality. We're always going to keep working. But we have to be able to make that jump. And once we do, I think we'll be able to stay in these games. It's always a quick two-minute stretch where we can't hit anything, and things go wrong." –Junior forward Jayden Gardner