ECU Falls To Longwood, 4-1 | Beaufort County Now | A three-run triple off the bat of Sydney Jacobsen gave Longwood all the offense it required in a 4-1 win over East Carolina Sunday morning at the Liberty Softball Invitational. 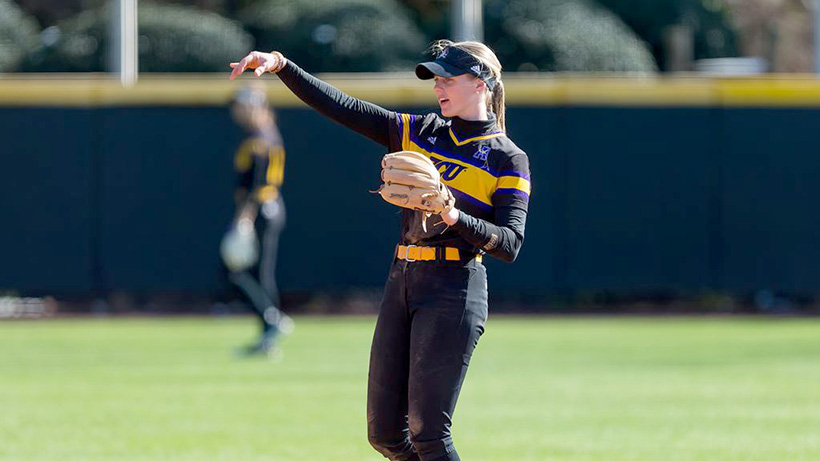 LYNCHBURG, Va.     A three-run triple off the bat of Sydney Jacobsen gave Longwood all the offense it required in a 4-1 win over East Carolina Sunday morning at the Liberty Softball Invitational.

The Pirates went 1-4 during the event to drop to 9-6 overall while the Lancers improve to 4-10 in advance of a Sunday afternoon matchup with the host Flames.

ECU, which committed two errors in the contest, lost all four games over the weekend by a combined six runs.

Kama Woodall (4-2) was tagged with the loss in a complete-game effort, allowing four runs (three unearned) on six hits with three walks and six strikeouts. Sydney Backstrom (3-4) picked up her second victory over the Pirates in as many games, going the distance and limiting East Carolina to one run on three hits with four walks and eight strikeouts.

Logyn Estes tallied two doubles and drove in the only Pirate run of the day while Jacobsen was 2-for-4 with four RBI.

Like Saturday's encounter with Longwood, a pitchers' duel ensued as the teams didn't get much going through the first three innings. ECU finally broke through in the bottom of the fourth. Chandley Garner and Rachel McCollum drew consecutive one-out walks before Estes split the gap in left center to plate Garner and put the Pirates on top, 1-0.

The lead didn't last but a few minutes as the Lancers struck right back. Leah Powell was hit by a pitch and proceeded to steal second. Lauren Fox then reached on a fielding error before both runners moved into scoring position following a wild pitch. East Carolina almost wiggled out of the sticky situation, inducing two-straight grounders, but Lauren Taylor worked a walk on a full count to extend the inning. Jacobsen then lifted a ball into right field that landed and spun away, allowing all three runners to score and afford Longwood a 3-1 cushion.

Jacobsen tacked on another run for good measure in the top of the seventh via a two-out RBI double.

Up Next     The Pirates face off against North Dakota and nationally-ranked Georgia next weekend in the UGA Classic in Athens, Ga.
Go Back