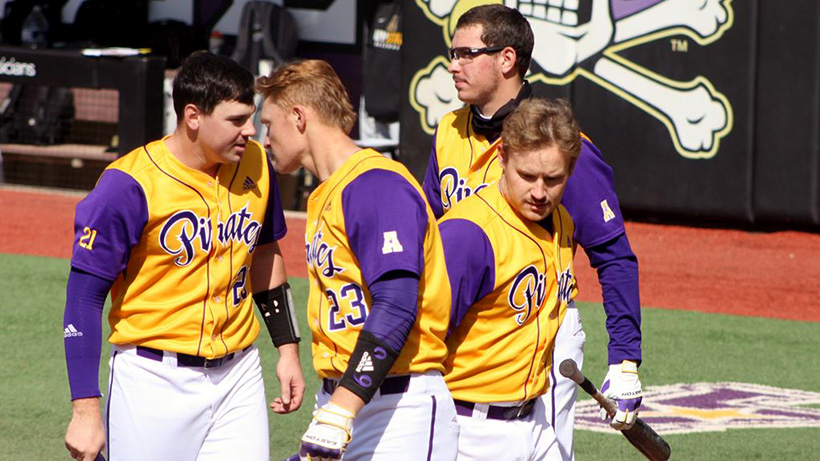 GREENVILLE, N.C. — No. 17 East Carolina scored six runs in the first three innings and cruised to a weekend series sweep of the 18th Keith LeClair Classic over Appalachian State, 10-2, Sunday afternoon at Lewis Field inside Clark-LeClair Stadium. With the win the Pirates improved to 9-2 on the season, while Appalachian State dropped to 6-4.

ECU wasted little time in jumping out to a lead scoring a run in the first inning for a 1-0 advantage. Connor Norby walked to get things started and took second on a flyball out to center. Thomas Francisco extended his hit streak to 11 games with an RBI single up the middle easily pushing across Norby.

The Pirates added two runs in the second extending their lead to 3-0. After consecutive walks to Josh Moylan and Bryson Worrell, Ben Newton's sac bunt moved the runners up 90 feet. Norby's infield single deep in the hole at short plated Moylan and Worrell, who took third on the single, crossed home on a failed pickoff attempt at first by Trey Tujetsch.

Carson Whisenhunt (2-0) earned the win allowing one run (earned) on two hits with a pair of walks and six strikeouts over five innings. The lefty struck out multiple batters in the first two frames and then one in the third and fifth pushing his season total to 27 over three outings. Skylar Brooks tossed two innings of relief giving up a run (earned) on one hit in relief. Dylan Lawson (1 BB, 1 K) and Nate Nabholz each worked an inning out of the bullpen.

Tujetsch (0-1) took the loss surrendering five runs (four earned) on three hits with five free passes and one strikeout in two-plus innings. Jason Cornatzer gave up a run (earned) in three innings with four punchouts and Eli Ellington was touched for four runs (all earned) in three frames.

Caddell's three-run homer, which was his team-leading fifth, pushed the lead to six, 6-0, in the third. Consecutive walks for the second-straight inning to Francisco and Alex Makarewicz started the frame and after a pitching change, Caddell punished a 3-2 offering from Cornatzer over the leftfield wall.

App State finally got on the board in the fourth inning making it a 6-1 ball game. With one out, the Mountaineers got walks by Phillip Cole and Andrew Greckel before Kendall McGowan's RBI single scored Cole from second base.

Caddell drove in two more runs on an RBI single in the sixth for an 8-1 lead. Norby started the inning with his second walk of the afternoon and took third on Makarewicz' double down the left field line. Caddell, who tied his career-high with five RBI, stroked a single to right field clearing the bases.

McGowan, who tallied all three of the Mountaineers hits in the game, led off the seventh with a solo home run cutting the lead pulling App State within six, 8-2. But ECU responded with two in the home half of the inning on Norby's RBI double and Zach Agnos' RBI ground out capping the scoring at 10-2.

Five Pirates collected multiple hits on the day in Caddell, Francisco, Ryder Giles, Makarewicz and Norby. ECU drew eight walks in the contest and finished the series with 25 free passes.

ECU returns to action on Tuesday, March 9 when it travels in-state foe Duke for a midweek matchup. First pitch is slated for 4 p.m. (ET) and will be broadcasted on the ACC Network.