Anomalies from the 2020 election that need to be investigated 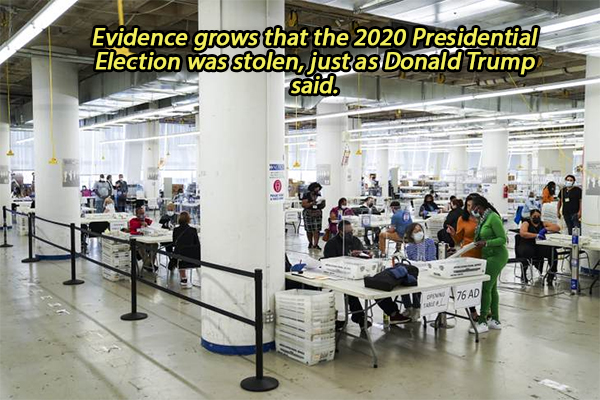 Election irregularities in the 2020 presidential election continue to be uncovered through independent analysis. An expert team led by physicist and Mensa John Droz, Jr., (a resident of Morehead City, NC) has been relentlessly examining election-related data and lawsuits since November, uncovering significant anomalies that warrant further investigation. The team’s objective throughout has been to help ascertain that all legal votes – and only legal votes – were counted. These efforts were previously reported out here, here, and here.

The team has just completed a “contrast analysis” of Biden versus Trump results in 2020 and Trump versus Clinton results in 2016 that exposes some irregularities that cannot be easily explained. An example from the report is provided below that explains what a contrast analysis is:

That’s a good thought, but between 2016 and 2020, the Census Bureau says that the population of California increase by less than 700,000 people. (Note that this includes children not old enough to vote, non-citizens, non-registered citizens, etc.). However, as mentioned above, the 2020 vote total for the Democrat candidate increased by 2.3± million votes. On the face of it, that significant vote increase does not appear to be logically explainable.

In fact, one logical explanation for the contrast would be that President Trump’s 1.5± million increase in vote totals from 2016 to 2020 came from people who voted for Hillary Clinton in 2016 or who sat out the 2016 election. Where could Biden’s 2.3± million increase over Clinton’s total in 2016 have come from? Note: as the team reports, “A statistical contrast is not proof of voting fraud, but a large contrast does point to situations that might merit closer examination.” And that is exactly the purpose of the team’s contrast analysis: to identify states in which vote tabulations could warrant further analysis, peeling the onion to the county and precinct levels as appropriate in order to forensically validate the results.

In order to complete the contrast analysis, the team compiled voting statistics by state for the 2016 and 2020 elections (available here), including the number of registered voters and votes cast for individual candidates. From the data, the team was able to gather some insights on voter turnout rates:

The team performed contrast analyses for 48 states (Alaska and Maine were not examined due to lack of data), with a positive contrast indicating that Biden scored more votes in 2020 than expected in that state, and with a negative contrast indicating that Trump did better in 2020 than expected. The team also performed a contrast analysis for each county in each state in order to determine outliers that are good candidates for precinct-level analysis. Several outlier states were identified in which the positive contrasts for Biden could not be easily explained by population increases in those states. In addition, the ten states with the largest positive contrasts provided 3± million more votes for Biden than they did for Clinton, as shown in the table below. Is that really possible without fraud, given Biden’s unwillingness to campaign and inability to draw a crowd when he did?

Here are some other observations from the contrast analyses performed by the team:

Conclusion. This latest report from the Droz team adds more fuel to the fire regarding “election irregularities” in multiple states during the 2020 presidential election. Be sure to read the whole report here. It is a travesty that forensic audits are not being conducted in many states to validate the results. That the Democrats have fought tooth-and-nail to prevent such audits explains much because if they were certain of Biden’s “overwhelming victory,” then the audits would prove that fact once and for all. Thank God that independent analysts like the Droz team are continuing to dig into the 2020 election data. The American people need to know what happened, and integrity in elections needs to be restored through decisive actions to tighten up state election laws.
Original source:  New Report Shows Significant Election Irregularities in Many States – RedState
Go Back