New Board Members Chosen To Lead in Governing UNC System | Beaufort County Now | The General Assembly this week appointed new members to the University of North Carolina System Board of Governors.

New Board Members Chosen To Lead in Governing UNC System 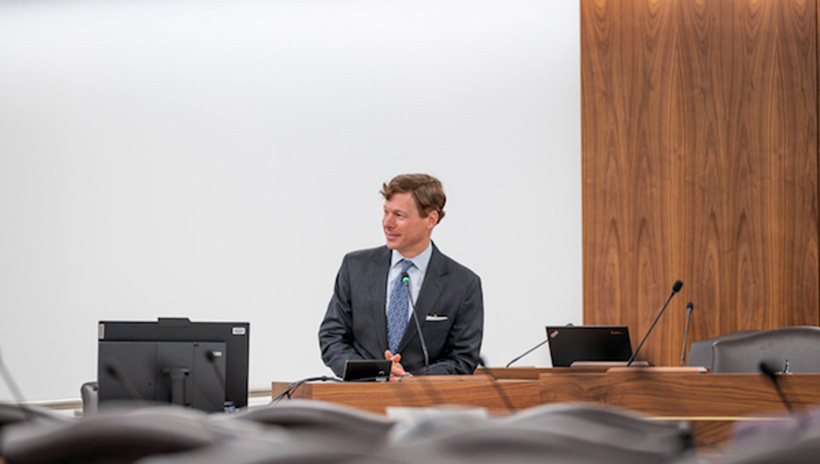 Lee Roberts, who will serve on the UNC System Board of Governors. | Photo: Maya Reagan / Carolina Journal

The General Assembly this week appointed new members to the University of North Carolina System Board of Governors.

The board governs the consolidated system, encompassing 16 public universities across the state and the N.C. School of Science and Mathematics.

The board has 24 voting members, elected by the state Senate and House to staggered, four-year terms.

"Fraley has been a longtime supporter of the UNC System. It's not a surprise to see him added to the UNC Board of Governors," said Jenna Robinson, president of the James G. Martin Center for Academic Renewal.

Rep. Kelly Hastings, R-Gaston, who leads the BOG appointment process in the House, told CJ the appointments of both new and returning board members represent a broad selection of talented North Carolinians. They'll help the UNC System stay affordable, deliver an educated work force, and meet the evolving needs and challenges of higher education in North Carolina, Hastings said.

"We have a strong group of diverse people from varying backgrounds. They are put in place to have a calming hand during difficult and fast-changing times."

"The addition of Lee Roberts to the UNC Board of Governors may signal the General Assembly's interest in scrutinizing the university system's finances," said Robinson. Roberts and Pope served as state budget directors under former Gov. Pat McCrory.

Republican Sonja Nichols, 55, is an African American businesswoman and philanthropist with strong connections to the Charlotte business community. While she ran for N.C. Senate and was defeated as a Republican, Nichols' politics are unusual. She voted for President Obama but supported much of President Trump's education reform agenda, including Trump's support for historically black colleges and universities.

"Sonja is a bridge builder; she brings people of all backgrounds together to help those in need," said Chris Sinclair, a close Nichols friend and her 2020 Senate campaign consultant.

"Sonja will bring a breath of fresh air and a unique perspective to help HBCUs grow and thrive in North Carolina. She will be an excellent addition to the UNC BOG and will greatly help with UNC's diversity, equality, and inclusion programs."

Former Democratic state Sen. Joel Ford will fill a seat on the board left vacant when Darrell Allison resigned. Allison recently was appointed chancellor of Fayetteville State University. He served on the Charter School advisory board and was supported by his former democratic primary opponent Sen. Mujtaba Mohammed, who defeated Ford in 2018.

"If there's one thing that I know about Joel Ford, it is that he loves UNC Charlotte, he loves historically black colleges and universities, and most importantly, the N.C. A&T Aggie Pride," Mohammed said.

The Senate approved its picks for the board. The House is expected to approve its BOG nominees next week.
Go Back