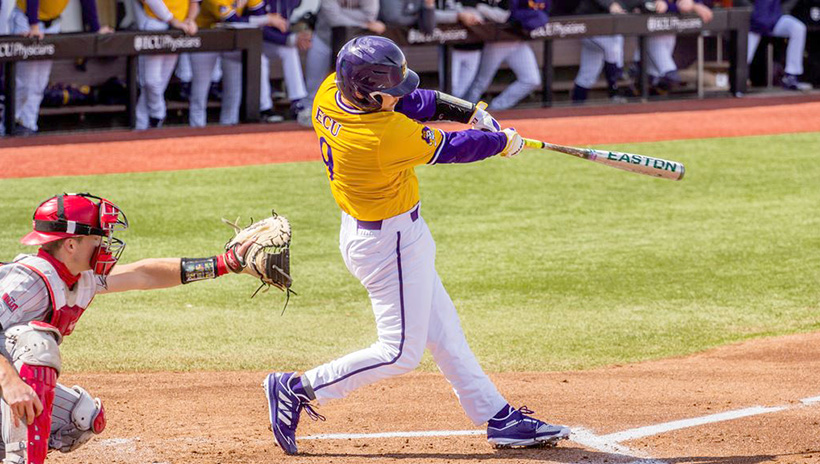 Trailing 3-0 going to the bottom of the first inning, the Pirates scored four runs and never trailed the rest of the contest despite a combined 19 runs in the contest. Zach Agnos drew a one-out walk and took third on Francisco's single up the middle. Caddell followed with another walk to load the bases. Two batters later, Bryson Worrell reached on a Redbird throwing error allowing plating Agnos and Francisco. Josh Moylan cleared the bases with a two-out double pushing across Caddell and Worrell for a 4-3 advantage.

Carson Whisenhunt (4-0) earned the win giving up four runs (all earned) on five hits with a walk and five punch outs. After giving up three in the first inning, he would go on an retire 10 straight until the fifth frame. Mayhue notched his fourth save of the year with three shutout frames where he allowed two hits and fanned four. Carter Spivey allowed three runs (all unearned0) on two hits, while Matt Bridges gave up one (unearned) on one hit with a pair of punch outs in an inning.

Sean Sinisko (1-3) took the loss after he was touched for nine runs (five earned) on eight hits with two walks and a strikeout in four frames. Jabob Gilmore worked a scoreless fifth inning with one strikeout before Erik Kubiatowicz allowed two runs (both unearned) in the sixth. Derek Salata finished the contest with two perfect frames for the Redbirds.

Illinois state jumped out to an early 3-0 lead thanks to three hits and a walk in the first frame. With two away, Jordan Libman singled to right field, which was followed by a Tyson Hays walk, Jack Butler's two-RBI single to left and Ryan Cermak's run producing single to left field.

The Pirates would continue to add on to their lead over the next three frames pushing the lead to 9-3. Francisco plated Connor Norby in the second with a base hit back up the middle, while Worrell's first home run of the season, a solo shot to center, pushed the lead to 6-3 after three frames. Caddell's team-leading eighth home run in the fourth tacked on three more runs capping a string of nine unanswered runs.

ISU pulled within one, 9-8, after scoring once in the fifth on Aidan Huggins RBI single and four times in the sixth, which came on four hits and a couple of Pirate miscues.

Caddell's RBI double and Alec Makarewicz' RBI single in the sixth capped the scoring on the day at 11-8.

Once again, seven of the Pirates starting nine in the lineup accounted for all 11 hits with Caddell (two), Francisco (three) and Moylan (two) leading the way. The three through seven spots in the order tallied nine RBI, eight coming with two outs in the stanza.

ECU will be back in action on Tuesday, March 23 when they travel to instate foe North Carolina. First pitch is slated for 6 p.m. (ET) and will be streamed the ACC Network.