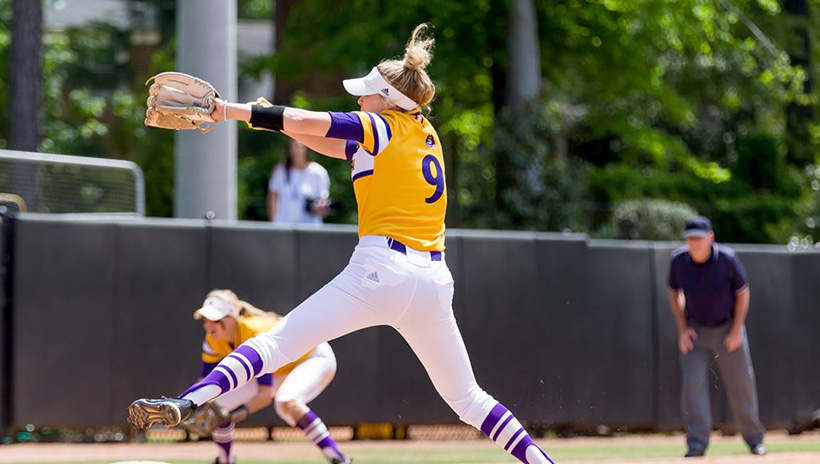 The Dukes (9-0) kept their perfect record intact while the Pirates dipped to 9-13.

Kama Woodall (4-7) lasted just 0.2 innings in the setback, surrendering five runs (all earned) on five hits with a walk and a strikeout. Alexis Bermudez (2-0) notched her second win of the weekend, tossing five scoreless innings in relief and limiting the Pirates to just one hit. She also struck out two batters while walking none.

The East Carolina offense went to work right away in the top of the first. Narron laid down a bunt single and advanced to third on a single by Ashleigh Inae. Rachel McCollum then singled through the left side to plate Narron and put the Pirates on top. James Madison starter Alissa Humphries wriggled out of further trouble by inducing two foul outs sandwiched around a strikeout.

The Dukes responded with a vengeance in the home half of the first. Newton scored the first JMU run with a RBI double while a two-run single by Hallie Hall and a Michelle Sullivan RBI triple left the home side with a 5-1 cushion through one complete.

After Bermudez took over in the circle in the top of the third, ECU was unable to cut into the deficit any further. Meeks accounted for the remainder of the scoring herself, notching a sacrifice fly in the fourth and an RBI single in the sixth.

Up Next: East Carolina begins American Athletic Conference play at Wichita State next weekend.
Go Back