"Vanilla Sky" versus "Open Your Eyes"

On this Occasion the Nod Goes to the Remake

Most film purists, who on occasion give opinion, will never give remakes of good films a first chance (forget the second chance), unless possibly, the subsequent film is on a smaller budget, or has a European director. Recently I viewed “Abre los ojos” (“Open Your Eyes”), and I intend to take this opportunity to contrast the estimable qualities of either film: “Open Your Eyes,” the former and “Vanilla Sky,” the latter with virtually the same story. In careful review, I give the edge to “Vanilla Sky,” which will fly in the face of most cinema purists, but first I will defend my opinion, and moreover, I just don’t care. 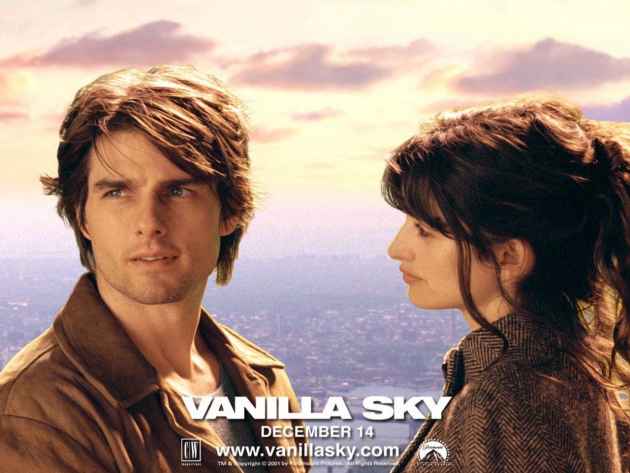 David Aames, Tom Cruise, and Sofia Serrano, Penelope Cruze, stand upon the roof of the Life Extension Building in futuristic New York, with the Vanilla Sky as a backdrop.

I feel obliged to defend this opinion primarily because I find “Vanilla Sky” a vastly underrated film, and 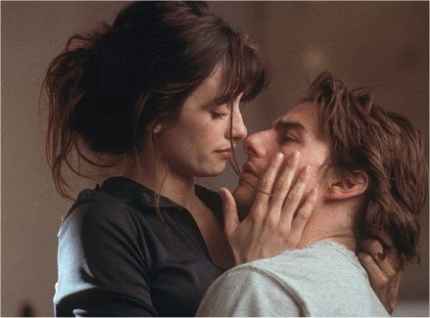 secondarily, I liked its predecessor, but it pales to its successor. In this treatise, I will examine these two fine films in one review as a codependent entity, and why I strongly feel “Vanilla Sky” needed to be made.

Both are very good films, however, I find the latter, “Vanilla Sky” to be the more compelling film. Regardless, one cannot put the proverbial “cart before the horse,” therefore, the latter film is dependent upon the story of the former film, just as “Open Your Eyes” is dependent upon the ongoing success of “Vanilla Sky,” which, in large measure, promotes the ongoing world wide notoriety as the latter film’s creative incubator.

“Vanilla Sky” made about 100,000.00 in domestic gross receipts; which covered the production costs of the film and the cost of distribution, however, it achieved financial success from foreign distribution receipts, of about 103,000,000.00, and the subsequent DVD sales. “Open Your Eyes” did only 400,000.00 in domestic gross receipts (Spain), and had no measurable international receipts. From these numbers, one can realize how essential each film is codependent to one another’s creative base, and celluloid immortality.

Director and screenwriter for “Vanilla Sky,” Cameron Crowe, kept much of the Mateo Gil and Alejandro 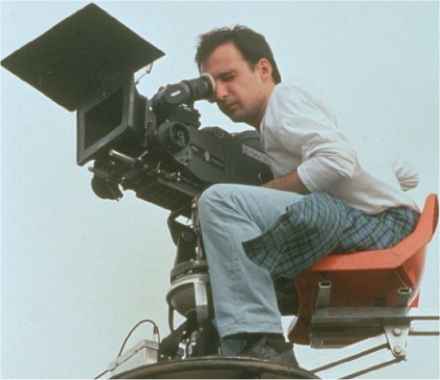 Amenábar collaborative effort intact, but modified the context of many of the characters, and some of the story, to allow for the reasonable contextual differences between Spain and Manhattan, United States of America. A second smart ploy was to keep the rare beauty and talented Penelope Cruz in the role of Sofia for the remake. Under Cameron Crowe’s direction or screenplay, she actually improved on her role as Sofia in the “Vanilla Sky” version. She seemed sweeter, more mature as a sensitive human.

With a much larger budget than Director Alejandro Amenábar’s film, Crowe was able to develop additional characters as well, such as David Aames’, the story’s protagonist played Tom Cruise, loyal corporate lawyer, Thomas Tipp, played by Timothy Spall. Thomas Tipp sincerely cared about David Aames, preferring to see the better angels of the self-indulgent David, which made the Tom Cruise character more real, sympathetic. Moreover, Cameron Crowe developed the infamous “Seven Dwarfs” corporate board of David Aames’ publishing enterprise, which was left to him from his wealthy father, making them into a tangible divisive entity.

In “Open Your Eyes,” we never meet 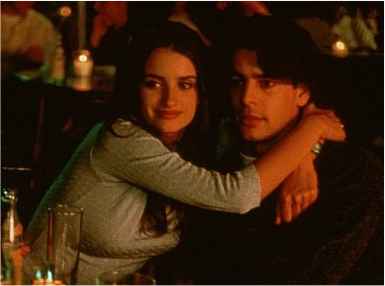 Cesar’s (David Aames’ self-indulgent twin in the sister film played by Eduardo Noriega) “partners” in his restaurant / catering business that was left to him from his wealthy father. Understanding something of the principal characters’ work life is very important, especialy if these corporate directors / partners are to be substantively menacing when they are accused of undermining these protagonist’s respective lives at every turn.

Also Director Crowe had the financial liberty to develop the science fiction element of “Life Extension” to allow for our deeper understanding of why David Aames chose that path, which led to his nightmare existence, when cryogenically frozen. Cameron Crowe effectively used Edmund Ventura, Noah Taylor, and Tilda Swinton as Rebecca Dearborn as the Life Extension customer representatives, in 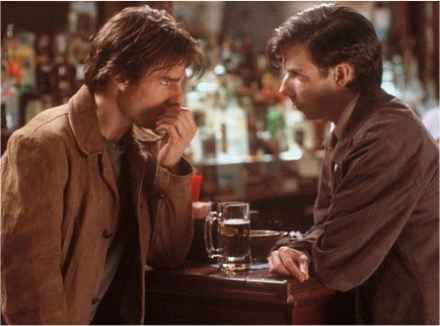 “Vanilla Sky,” to tie the many loose ends of this far fetched tale of a time far into the future.

Even though Director Crowe used 135 minutes, in “Vanilla Sky,” to tell the same story that Director Amenábar only need 117 minutes in “Open Your Eyes,” I still had trouble understanding the film in my first viewing. I don’t know if it was that Director Crowe told a less direct story, choosing to embellish many of the film’s characters to make them more sympathetic, or, possibly, it was the first time I had that tale told to me, and I was quite slow on the uptake. Regardless, I was immediately mesmerized by the story, and knew that I would need a more in depth explanation.

I’ve gotten the essence of the story in the three times now that I have viewed this fine film, and the novelty ain’t worn off yet. It is such a rich story of the loss of power, 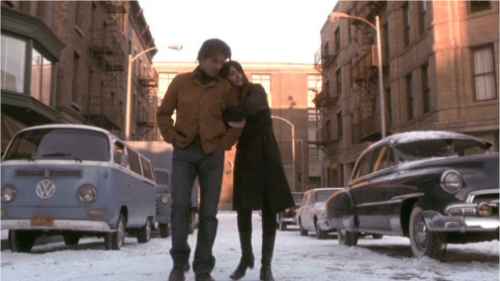 wealth, youth and beauty, while finding redemption in learning the fact that we are eternal, and one best be careful how they treat their spirit, because it can treat you back - badly. This is Mateo Gil’s and Alejandro Amenábar’s well told tale, but it took Cameron Crowe’s direction, who has created some fine films; “Say Anything,” “Jerry MaGuire,” “Almost Famous” and “Elizabethtown” to command the big budget from his fellow well healed producers to build this story into a better told tale through: much better cinematography, deeper embellishment of characters, and better acting - much better acting.

As I mentioned earlier, even Penelope Cruz’s Sofia is more dimensional than her original Sofia. Playing opposite Tom Cruise may have, possibly, heightened her presence: I don’t know. What I do know is that Cruise gives an edgy performance and there are many who would strip him of his acting talent to make some obtuse point. There are many critics of this film because they say Cruise is playing himself, so big whup. Well, my mother-in-law cannot stand Tom Cruise and she knows nothing about cinema as an art form, so that puts these Cruise-hating-critics in some mighty fine company.

Personally, I wouldn’t give two good dumps for the bulk of Cruise’s movies before his portrayal of Navy prosecutor Lt. Kaffee in “A Few Good Men,” however, since 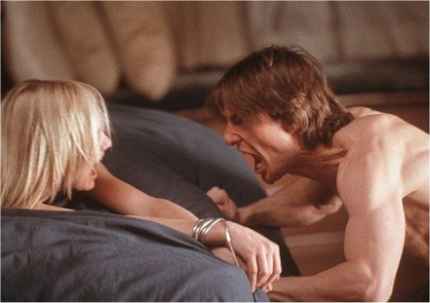 that film, Tom has made quite a few good films; including this one, “Magnolia,” “Jerry MaGuire,” “The Last Samurai,” “Collateral” and “Valkyrie,” and his acting did make a difference in these films, and respect should be paid.

Respect should also be paid to Cameron Diaz as the wacky other woman, Julie Gianni, who drove David Aames into a wall and shattered his face, his body and his life. She was more of the almost-as-pretty girl, with a fun wild streak that degenerates into the I will-stalk-you-till-I-kill-you persona. Kurt Russell did an admirable job as the caring court appointed psychologist, just as Jason Lee was perfect as the loyal friend.

In “Open Your Eyes,” the acting was competent, but it fell quite short of that of “Vanilla Sky.” In almost every facet of the construction of an outstanding film, the latter was more efficient in conveying a story than the former, and in that I must proclaim “Vanilla Sky” the better film. We must 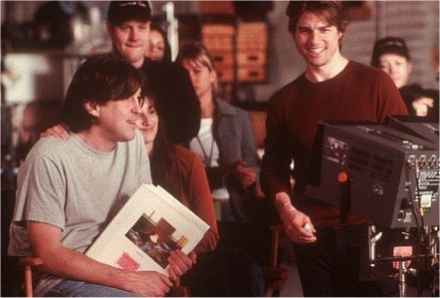 agree on this one point, however, without the former there would no latter film that enjoyed decent financial success, and without “Vanilla Sky” being made so well by Cameron Crowe, “Open Your Eyes” would not live on to some measure of regard unfounded when it was first release in Spain in 1999. To this extent, they will always be interconnected and codependent on each other as long as people are curious about good cinema.

Rent them both. Determine for yourself.