Once Upon a Time in the West | Eastern North Carolina Now

Once Upon a Time in the West

Time Loves a Hero: Everyone Else Take a Seat

This is the legacy of arguably two of Sergio Leone's best films: "Once Upon a Time in the West," and to be reviewed later, "Once Upon a Time in America." Our subject in the now is the classic western that features an enigmatic cast, fantastic staging of scenes and equal cinematography, and is long on film score and short on dialogue.

“Once Upon a Time in the West” is not only one of Sergio Leone’s best films, it is inarguably one of the top ten westerns ever made. The story is of the powerful ruthlessly subjugating the powerless, with little resistance until a hero steps forward, is timeless. In this yarn two heroes, however reluctant, take that step forward.

The two heroes of this tale are Jason Robards, as hardened criminal on escape Cheyenne, and Charles Bronson, as the

vengeful Harmonica, who plays a few mournful notes from the harmonica far more than he speaks. Both men find a purpose to be in the same place at the same time, and the heroine in need of their aid is the Italian beauty Claudia Cardinale, as the widow Jill McBain.

As beautiful as Claudia Cardinale was in her prime, it is not her beauty that attracts these reluctant heroes; 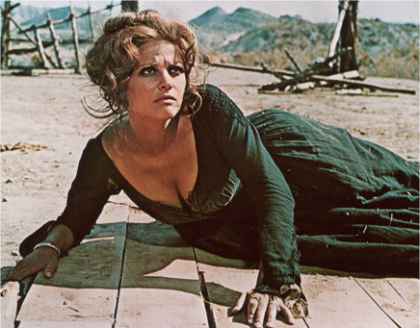 moreover it was for the money for, he would have to help her make, for one and revenge for the other. Definitely not altruistic qualities. For a film released in 1968, “Once Upon a Time in the West” definitely went against the formulaic typical westerns that were so prevalent in that era. But then again, so did Leone’s previous three “spaghetti” westerns, released respectively in 1964, 1965 and 1966: “A Fistful of Dollars,” “For a Few Dollars More” and “The Good, the Bad and the Ugly.” They were so irreverent to the classic western genre, that one can well understand Director Leone’s natural successive need to bring all these qualities together in one to produce his American classic - mostly filmed in Spain.

Sergio Leone’s cinematic contradictive qualities are emblematic of the myriad of complexities that make up intelligent human beings. I believe that is why his films innately speak to folks long after his death. Leone makes a romantic western like, “One Upon a Time,” with a beautiful woman like Cardinale, and yet there is no romance. He shows us, early in the film, the gun belt of an malevolent gunman as he is taking aim at a small child begging for his life with the impassioned stare of his big blue eyes. The gunman stares back with the squinting blue eyes of a man the has seen too much bad, and has done even worse, and unmistakably, the audience can tell that the actor playing a this malevolent man is Henry Fonda. He has slaughtered the boy’s family and now, consequently, holds his life in the balance. And in a moment, he coldly squeezes the trigger of his nickel plated Colt, and snuffs out all that child would become. Considering the cinematic fact that Henry Fonda has only played heroes: from Abraham Lincoln to Tom Joad in “Grapes of Wrath,” Leone’s desire to stun this audience, for effect, was heavily measured by the contradictive story telling in these images.

A malelovent Henry Fonda tries playing bad guy, and gains no sympathy from the audience. He is rotten to the core.

Symbolism has always been an integral component in the Leone box of cinematic tools. The first scene of the film begins with Harmonica getting off of the train and greeted be three dangerous

desperado in dusters at the station. The scene comprised of the four men
looking at each other for nearly five minutes, with just the ambient sounds of the locale as the soundtrack: no dialogue, just eventual gunfire.

Later upon his first meeting with Cheyenne, he explained his previous duel as such:
Harmonica: “I saw three of these dusters a short time ago, they were waiting for a train. Inside the dusters, there 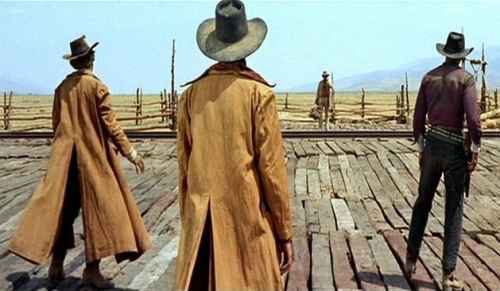 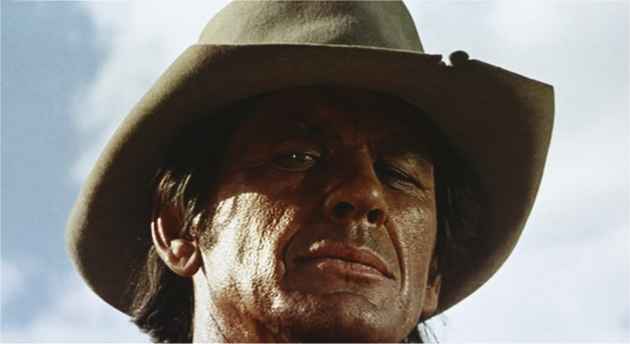 At some point in every great western there must be the standoff.

The staging of the scenes, whereby just the faces of these integral characters are used to convey the intent of the scene, with the supportive cinematic score by one of the greatest film score composers since inception of the motion picture - Ennio Morricone - is unique to the Leone brand. With such little dialogue, and when a director who films just the images of the interesting faces of his talented actors is his paramount vehicle for telling this story in celluloid, thus the music becomes an invaluable and indispensable component to convey his message. Morricone is just the artist to complete the classic “Once Upon a Time in the West.” If you truly love exceptional films, and even if you must have every detail explained to you in that film, sit your butt down for 165 minutes and experience one of the greatest westerns ever made. That’s an order.