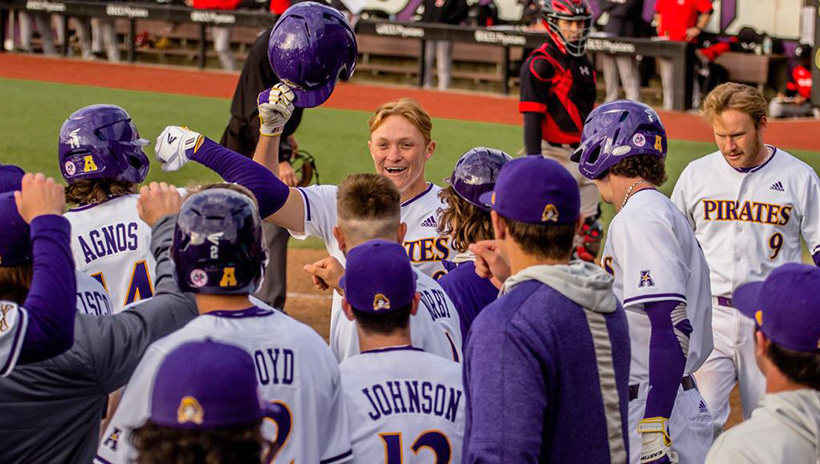 GREENVILLE, N.C.     Garrett Saylor struck out a career-high eight batters over four frames and Alec Makarewicz belted his fourth home run of the season helping No. 11 East Carolina to a 5-4 win over Cincinnati Thursday afternoon in American Athletic Conference action at Lewis Field inside Clark-LeClair Stadium. With the win the Pirates improve to 19-5 on the season and 1-0 in league play, while the Bearcats fall to 11-11 and 0-1.

Trailing 4-2 going to the bottom of the seventh, the Pirates scored three runs taking a 5-4 lead. Thomas Francisco drew a one-out walk and took second on a wild pitch. Seth Caddell followed with an RBI double down the left field line pulling ECU within one. Two batters later, Makarewicz hammered a 2-1 offering from Conner Linn to left field that traveled 371 feet.

Saylor (2-0) got the win after working four perfect frames to go with his eight punch outs in relief. The right-hander, who entered the game after the Bearcats loaded the bases in the fourth with a 4-2 lead, struck out the side shutting down would-be big inning for Cincinnati. Ryder Giles notched his second save of the season after pitching a clean ninth with a strikeout. Carson Whisenhunt was touched for four runs (all earned) on eight hits with a walk and three strikeouts in four-plus frames.

Linn (0-1) suffered the loss after being touched for three runs (all earned) on three hits with a walk in 1.1 innings out of the bullpen. Starter Zach Segal allowed just two runs (both earned) on eight hits with six punch outs and three walks in six innings. Jackson Murphy recorded the final two outs of the game for the Bearcats.

ECU jumped out to an early 2-0 lead scoring a pair of runs in the first inning. Connor Norby opened the contest with a walk to extend his on-base streak to 31 games dating back to last season. Francisco followed with a single up the middle and both guys moved up a base on a wild pitch. Josh Moylan's RBI single scored Norby and Makarewicz plated Francisco with an infield single.

Cincinnati responded with a run in the second inning pulling within one, 2-1. Joey Bellini singled through the right side and two batters later moved to second on Eric Santiago's walk. Ryan Nicholson's base hit to right-center scored Bellini from second.

The Bearcats scored a run in the fourth and two in the fifth taking their first lead of the day, 4-2. Santiago's RBI ground out to short pushed across Bellini knotting the game at two-all. Four consecutive hits to open the fifth gave Cincinnati a two-run advantage. Joe Powell singled to right field to get things going and scored on Cole Hartling's RBI double to right center. Jace Mercer followed with an infield single and Wyatt Stapp's shot through the right side accounted for the final run.

Offensively the Pirates registered 11 hits getting a pair from Giles, Francisco and Makarewicz. The trio of Caddell (one), Makarewicz (three) and Moylan (one) combined to drive in all five runs on the day.

ECU and Cincinnati will continue the weekend series Friday afternoon with a 4 p.m. (ET) scheduled first pitch and will be streamed on ESPN+.
Go Back