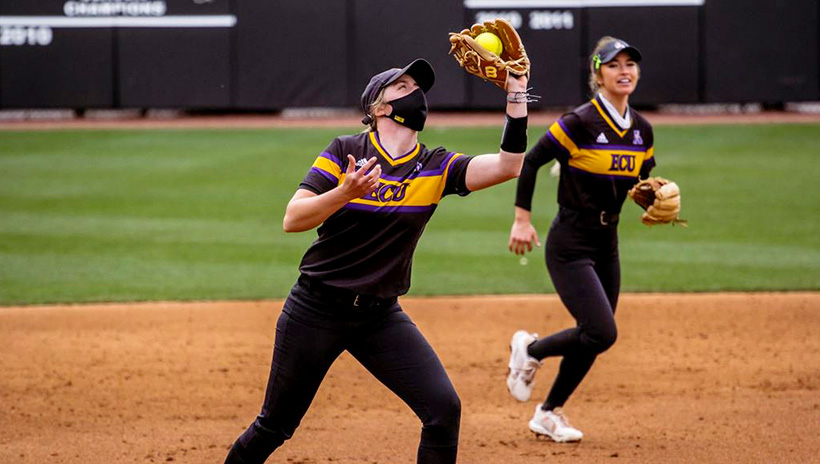 GREENVILLE, N.C.     East Carolina wrapped up its 17-game road swing Wednesday with a 1-0 non-conference loss to UNCW at Boseman Field.

The Pirates (10-17) left nine on base and were just 1-for-9 with runners in scoring position as the Seahawks (8-15) finished with a 7-6 advantage in the hit column.

Six different ECU batters recorded a hit in the contest while Ashleigh Inae drew a pair of walks. Jada Santiago went 2-for-3 with a double and the game's only RBI to pace homestanding UNCW.

Erin Poepping (3-7) took the loss, allowing just the one run and six hits in 4.1 innings of work. Janel Gamache (2-4) picked up the win, tossing six scoreless frames and scattering six hits. She walked four and struck out five. Logan Bjornson recorded her second save of the campaign by collecting the final three outs of the game.

UNCW dented the scoreboard in the bottom of the first inning. Following a pair of singles, Santiago laced a double into right center on the first pitch she saw to plate Tayler Vitola and put the Seahawks on top, 1-0. Poepping was able to elude further damage by inducing a pop up to short and a fly ball to center field.

East Carolina's first major scoring chance occurred in the top of the fourth. Rachel McCollum snuck a single just inside the left field line before Chandley Garner doubled to right center. Gamache was able to wriggle out of trouble though, retiring the next three Pirate batters to keep UNCW's one-run lead intact.

Attempting to knot the score in the top of the fifth, ECU was able to get runners to the corners thanks to a pair of two-out walks by Olivia Narron and Inae as well as Narron's second stolen base of the contest. McCollum worked a full count before grounding out to Gamache in the circle.

The bottom of the Pirate lineup set up a potential rally in the top of the seventh as Sophie Wools singled to center and Taylor Woodring drew a walk. Bjornson worked out of the situation, however, producing a pop up on the infield and two fly balls to stymie East Carolina's comeback effort.

Up Next: The Pirates welcome No. 24 UCF to Max R. Joyner Family Stadium April 9-11 for a four-game American Athletic Conference series.
Go Back