Published: Saturday, April 17th, 2021 @ 8:41 am
By: Carolina Journal   ( More Entries )
Publisher's Note: This post appears here courtesy of the Carolina Journal. The author of this post is David N. Bass. 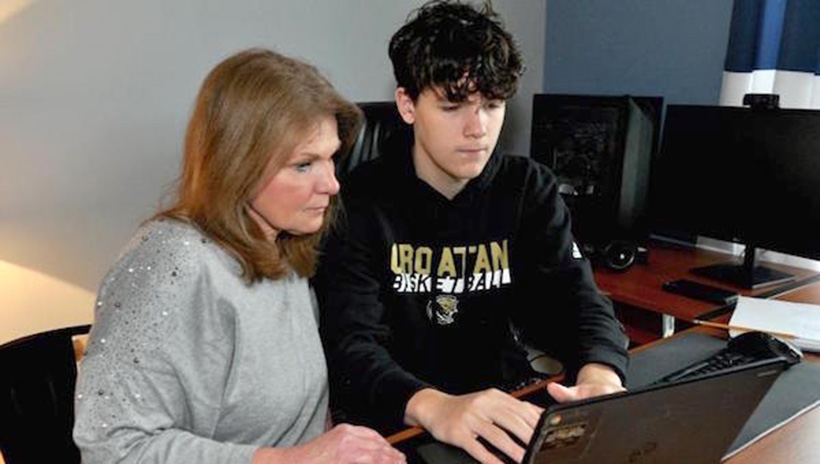 Christine Hanks had to endure the challenge of watch her son's mental health deteriorate and his academics suffer. | Photo: Maya Reagan / Carolina Journal

Carteret County resident Christine Hanks never cared much for politics. She had never contacted a school board member, her legislator, or the governor on any issue.

But that changed in March 2020, when Gov. Roy Cooper issued an executive order shuttering public schools across the state due to the rising COVID-19 pandemic. A two-week break from in-person classroom instruction — a purported effort to flatten the curve — soon turned into months of all-virtual instruction for her 15-year-old son, Luke, at Croatan High School in Newport.

Christine had to sit at home and endure the challenge of watching Luke's mental health deteriorate, his academics decline. Even when Luke returned to a hybrid approach in August 2020, the on-again, off-again schedule didn't work for his learning style.

During this time, Luke attended school two days a week, in-person, for partial days. The remaining three days were still virtual. But even on days when Luke was back in the classroom, he would just sit at his desk and complete the online assignments, the same as if he were back at home.

"He got so discouraged and felt so defeated that he just gave up," Christine said. "Without that consistency and without being in the classroom those days, it's almost impossible to maintain any semblance of a normal school week."

By mid-October, Christine realized hybrid learning was not working. It was taking a toll on Luke's grades: Before he was an A or B student. Now, he had slipped to Cs and Ds.

"He was embarrassed and ashamed," Christine said. "He's a 190-pound, 6' 4" athlete, but he felt so defeated by this. It's been so hard for him not being able to play sports at school, not having that exercise and social time, the time to be with coaches who help these young men transition from boys into men. All of that has been taken away and erased."

As Luke's grades slipped, he spent more and more time on his smartphone and Xbox. Christine fought with him day-in and day-out to complete assignments, but she was reluctant to take away his technology because it was his only line of connection to the outside world.

"The only time I heard him laughing was when he was on his Xbox on his headset with some of his friends," Christine said. "I would hear that laughter from upstairs and my heart would swell, and I would know he was going to be OK."

The good news is that Luke returned to school for in-person instruction four days a week beginning March 22. That move by the Carteret County Board of Education was made possible by a bill passed by the General Assembly and signed into law by Cooper in March that gave local school boards the authority to reopen classrooms.

But Christine says there still remains a year-long period of lost academic and social progress for her son. It will take a focused effort to help him get back up-to-speed.

"We're an upper-middle-class family. We still have jobs, we haven't lost our health insurance or income. We're going to figure this out," Christine said. "But if this has been hard on us, I can't even imagine what it's been like for families without resources."

After more than a year of closed classrooms across the nation, it's now become clear that this step has had profound effects on young peoples' mental health. One study from the Centers for Disease Control and Prevention reported that emergency room visits for mental health reasons for children and teens jumped 24% and 31%, respectively, from April through October 2020.

Another review of the literature by U.K. researchers found that young people disconnected from school due to COVID-19 closures were as much as three times more likely to develop depression in the future, and the impact of that depression on their mental health could last up to nine years later.

There's also evidence that teen suicides have surged during the pandemic: For example, Las Vegas public schools decided to reopen for in-person learning early after seeing 18 teen suicides in nine months, doubling the rate during the entire year of 2019.

"Depriving our children of the opportunity to interact with peers and educators was a catastrophe that unfortunately ended in tragedy for children unable to manage social isolation and depression," noted Dr. Terry Stoops, director of the Center for Effective Education at the John Locke Foundation.

"Unlike adults, children do not possess a store of coping mechanisms and strategies that they can deploy in the face of adversity. As a result, the pandemic took a toll on the social and emotional development of our children."

Scholars Vladimir Kogan, an education policy expert, and Vinay Prasad, a physician and epidemiologist, have argued the consequences of keeping schools closed are so significant that this course of action should only be followed in the most extreme cases.

"We believe schools must remain open unless the local health care system is facing collapse, due to capacity constraints. Short of such a scenario, the tradeoffs favor doing everything possible to keep schools open," wrote in a recent op-ed.

"In many parts of the country that kept schools closed this fall, reports of suspected child abuse plummeted, suggesting that thousands of case are going unreported, and children isolated with abusers," they added. "New evidence from Japan also shows that school closures have caused young children to gain significant weight, and some U.S. cities are seeing a disturbing surge in juvenile gun violence."

On that last point, cities in North Carolina and across the country have witnessed spiking gun violence during the pandemic. In Durham, for example, a total of 318 people were shot in 2020, compared to 189 people in 2019, a 68% surge. Mostly young people were responsible for the violence.

For Christine's part, she said that the school-closing debacle has opened her eyes to the need to be involved and invested in the education system at an advocacy level. Christine has worked with local Carteret County school officials to lobby the governor and lawmakers in Raleigh to reopen schools, including through Senate Bill 37, a measure that was ultimately vetoed by Cooper in February before he came to an agreement with Republican lawmakers on a new reopening plan.

Later, Christine came to Raleigh to voice her support for a new local bill that would have opened Carteret County schools and wasn't subject to a gubernatorial veto. She shared her story of how Luke has suffered in a hybrid-schooling approach in front of the House K-12 Education Committee.

"I've volunteered hundreds of hours in various school systems," Christine said. "I've run the PTA and headed up fundraisers and booster clubs. But I've never gotten involved and understood the behind-the-scenes stuff like I have recently. Now, I'm at a place where I want to use that advocacy. Now that my eyes have been opened, I can't close them."
Go Back