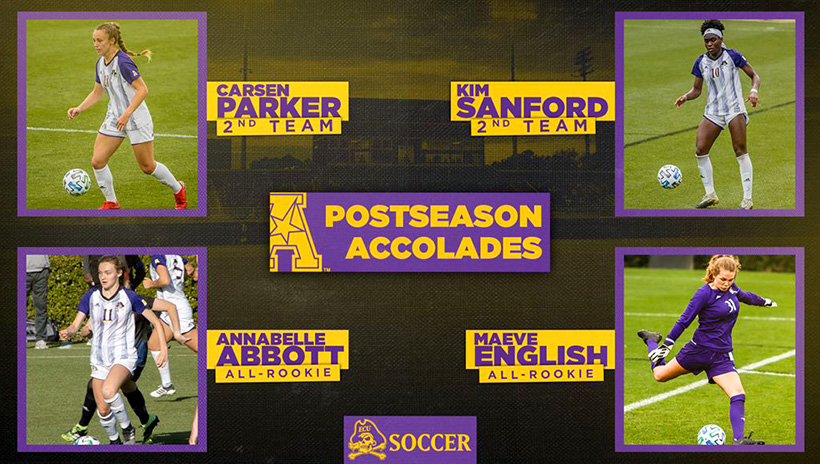 GREENVILLE, N.C.     After helping the Pirates to one of their best AAC finishes in program history, four players from the East Carolina soccer team have earned postseason honors, as announced by the conference office on Wednesday.

For the second straight year, Kim Sanford earned a spot on the AAC All-Conference Second Team. Sanford was joined on the Second-Team by classmate Carsen Parker. Maeve English added to her three AAC Goalkeeper of the Week awards by being named a unanimous selection to the AAC All-Rookie team. Annabelle Abbott made it two ECU freshman to earn honors as she was also named to the All-Rookie team.

Sanford came into the season with high expectations after being named to the AAC Preseason All-Conference team and she lived up to it. The senior defender from Philadelphia, Pa, has been a wall in the middle of the center of the defense all year, playing 921 minutes, which is the most among field players for ECU. Sanford has gone the distance in eight of ECU's 10 games.

"I am very happy for Carsen and Kim," said head coach Jason Hamilton. "They have played a lot of minutes over the past three years for us and have been a huge part of our success. We have asked a lot of them and they always answer. They have grown tremendously as leaders in the past year and that has helped our program create the culture we want to have. We are happy to have them both returning for another season."

English has started every game of her freshman campaign and has excelled right from the start. The Greenville native was named AAC Goalkeeper of the Week after her second game when she shutout Houston and has gone on to win the award three times this season, the first rookie to do so. English is second in the AAC in saves with 36 and has a save percentage of .750.

Abbott has also started every game of her rookie season and has produced for the Pirates in a variety of positions. The Holly Springs, N.C., product got her first collegiate point when her assist set up a Madie Knaggs goal at Temple. Abbott added a goal to her tally when she scored against Tulsa in the final home game of the season.

"I am thrilled for Maeve and Annabelle," Hamilton said. "To be recognized as someone who can make an immediate impact in this conference is truly an honor. Maeve has been great in goal and allowed us to finish in the top four with her play. Annabelle has logged a ton of minutes and has been adaptable in the roles we have asked her to play. Both bright spots for the future."

With four Pirates earning postseason honors, it is the most ECU players since four received honors following the 2012 season. Sanford is the fourth ECU player to be named to an All-Conference team in consecutive years since the Pirates moved to the AAC. With Parker and Sanford receiving All-Conference Honors, it is the fifth time that ECU has multiple All-AAC selections. English and Abbott are the first pair of Pirate rookies to earn All-Rookie honors in the same season since 2012 and are the fourth and fifth Pirates to earn the award in the AAC.

ECU will open postseason play on Thursday evening against USF in the American Championship Semifinals. Kickoff is scheduled for 7 p.m., and the game will be broadcast on ESPN+.
Go Back