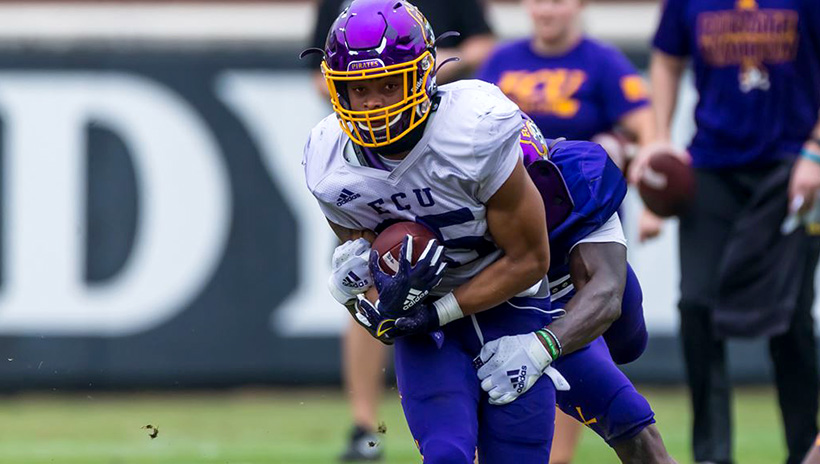 "There were a lot of situations today for the offense and defense, so it was really good to get that work in," Houston said. "There were some really, really good positives out there today and some things we obviously have to improve on."

Holton Ahlers led a five-man rotational quarterbacking corps that collectively completed 28-of-36 throws for 313 yards and a score — a completion percentage of 77.8. On the other hand, ECU's ground effort was slowed by a swarming Pirate defense that generated 12 tackles behind the line of scrimmage and surrendered just 57 yards on 37 carries — an average of 1.5 per attempt.

Running back Keaton Mitchell, who scored two of the offensive unit's four touchdowns from 26 and six yards out, rushed for a game-high 43 yards on four carries. Asa Barnes added a one-yard plunge before Mason Garcia connected with Maceo Donald on a 23-yard strike in the latter half of the action to close out the scoring.

In addition to the dozen stops for lost yardage were three sacks and a pair of takeaways. Inside linebacker Myles Berry also helped his unit tally a score by picking off Ahlers during a situational "coming out" segment on the half-yard line and returning it three yards to paydirt while outside linebacker Elijah Robinson scooped up a fumble. Safety Gerard Stringer, who missed the entire 2020 campaign because of an injury, booked four TFLs (-19 yards), including a sack, to compliment a team-best five-tackle outing by fellow secondary performer Juan Powell.

"If I am wearing my defense hat, then yes, I was pleased," Houston said. "If I am earing my offensive hat, then we have to take care of the ball better. That was a big emphasis for the defense today."

Ahlers topped all passers with a 12-of-17, 138-yard outing, which included a run of six-straight completions. Garcia (90 yards), Alex Flinn (49) and Ryan Stubblefield (36) each had only one incomplete pass on a combined 16-of-19 aerial effort.

"Well, our starter is a really good one," Houston added. "Other than the mistake off the goal line, I thought he had a really good day today, which is consistent with his spring. He is his biggest critic, so he will correct that. But overall, I was really pleased with our younger quarterbacks as well — there's a lot of ability with that group."

Placekicker Owen Daffer was perfect on all four point-after attempts, while punters Jonn Young and Luke Larsen averaged 41.7 and 37.7 yards per boot, respectively, in three attempts each.

East Carolina will return to the practice facility Tuesday afternoon to begin its final week of spring work.

"I am ready for all of the coaching stuff to be done and for everyone to be vaccinated," Houston closed out. "You know this is what we love. To be out here, the field is awesome, the competition, the stadium, being around the guys — as a coach, it is what I love to do. Just to be around them, and what they love to do is to get out here and compete. This is why we come to work."
Go Back