Pirates Fall to USF in AAC Semifinals | Beaufort County Now | A defensive battle was decided by an own goal as the East Carolina soccer team fell to No. 15 USF 1-0 in the AAC Championship Semifinals on Thursday evening. 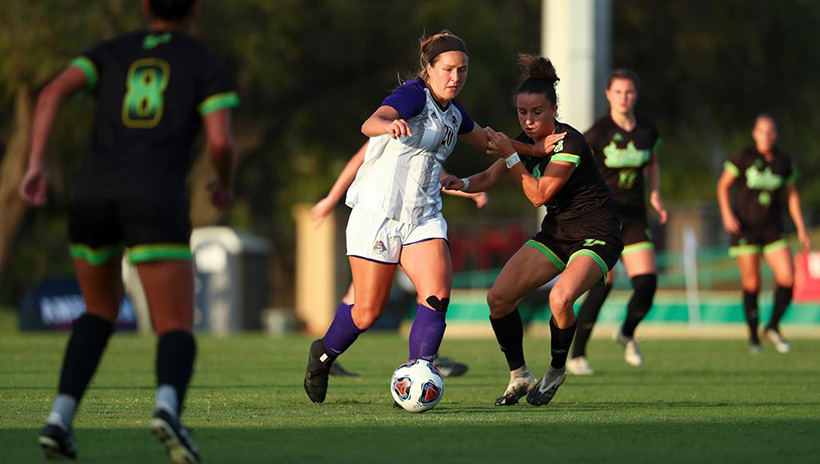 TAMPA, FL     A defensive battle was decided by an own goal as the East Carolina soccer team fell to No. 15 USF 1-0 in the AAC Championship Semifinals on Thursday evening.

"I couldn't be more proud of our ladies for the effort they put forth today," said head coach Jason Hamilton. "USF is a very good team and for a second time this season, we stood toe to toe with them. This shows our young ladies that they belong here and hopefully motivates them for the offseason."

ECU finishes its season with a 3-6-2 record while USF advances to take on No. 3 seed Cincinnati in Saturday's AAC Championship Final.

"I am grateful we got a spring season in, it feels good for them all to be back on the field and doing what they love," Hamilton said. "Even more, it allowed our seniors to have as normal of a last season as you possibly could during this pandemic."

The Pirates started the game brightly, pinning the Bulls back deep in their own half. That early pressure led to a corner kick opportunity and a shot for Alexia Moore.

Unfortunately for ECU, an unlucky bounce on USF's first attack of the game resulted in a goal in the 12th minute. A Bull got free down the left wing and sent a low cross into the Pirate box. ECU had it covered, but the ensuing clearance bounced off a Pirate and into the goal for an own goal.

Trailing by that goal, ECU needed to limit the damage. The Bulls had a great chance to double their lead in the 38th minute. Serita Thurton found space just outside the ECU six-yard box and took a quick shot, but ECU goalkeeper Maeve English reacted quickly and was able to make a kick save. The rebound fell to USF's Fanny Pelletier-Laroche, but her shot was blocked by a swarming ECU defense, ending the threat.

The Pirates got their first shot on goal of the game in the 39th minute, but Sydney Schnell's effort was saved by USF's Sydney Martinez and the Pirates went into the halftime break still trailing 1-0.

In the second half, ECU pressed forward looking for the equalizing goal, which opened the game up for both sides. During a five minute stretch from the 54th minute to the 59th minute, USF had three shots and three corner kicks, but two saves from English and the ECU defense prevented any of those attempts from finding the goal.

With less than ten minutes remaining, ECU got a golden opportunity through a corner kick. The Pirates swung in a cross on the set piece and Tori Riggs was there to meet it, directing a shot towards the upper corner of the goal. But Martinez was there to push it outside of the post for another Pirate corner. This one again was crossed dangerously into the USF penalty area, but could not find an ECU player.

The Pirates had one final opportunity in the 89th minute with Addison Salz launching a shot from deep, but Martinez saw her effort fly just over the USF crossbar and out of bounds. From there, the Bulls saw out the final minute to hold on to the victory.

"We are thankful for all of the support we had from Pirate nation back home and those here who travelled to support us," Hamilton added. "It will be a quick turnaround for the fall season and I am excited to see this group play again."

USF finished with a 16-5 edge in shots, but the Bulls' advantage was just 6-3 in shots on goal and in corner kicks. English finished with six saves for the Pirates while Martinez had three saves for USF.
Go Back