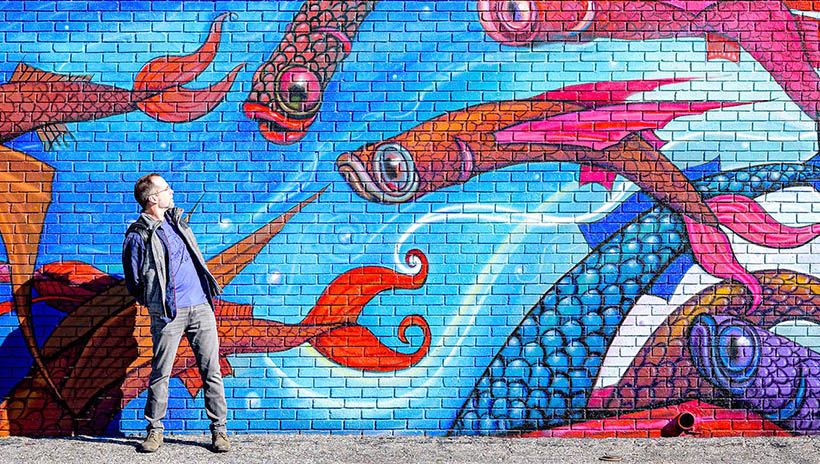 ECU associate professor Scott Eagle stands with a mural he painted at The Art Lab off Dickinson Avenue in Greenville. | Photo: Aaron Hines

Scott Eagle's "School of Flying Fish" mural has made the jump from Greenville all the way to Beijing in a showcase of American street art at the U.S. Embassy.

Eagle, associate professor and area coordinator for the painting and drawing program in East Carolina University's School of Art and Design, is one of 23 artists from across the United States whose work was selected for the embassy's "Art for the People" outdoor exhibit.

The piece was reproduced from a photo of Eagle standing in front of the mural he painted on the Ficklen Street side of The Art Lab building off Dickinson Avenue in Greenville. 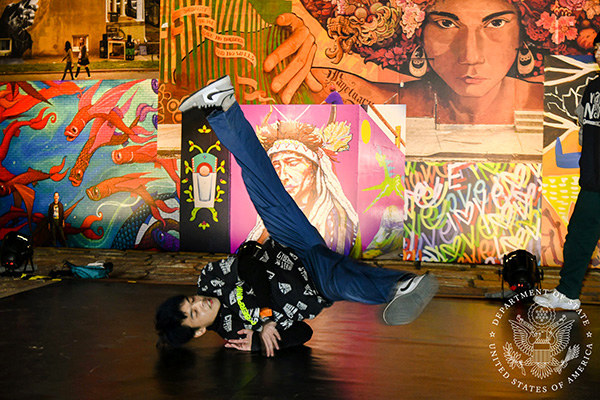 A break dancer performs during the launch party for “Art for the People” at the U.S. Embassy in Beijing. Scott Eagle’s “School of Flying Fish” can be seen in the lower left corner. | Photo: Contributed
"I was really delighted to see that Scott's art, conceived and created for our local community, has received this sort of international attention," said Dr. Chris Buddo, dean of the College of Fine Arts and Communication. "To be a part of the state department's program of outreach is already quite an honor, but then to see that his work is part of a display at the U.S. Embassy in China just really takes it to another level. I am so proud of all that Scott has accomplished and also proud of the partnership with The Art Lab and Emerge Gallery that got it all started."

The exhibition in China, which officially kicked off April 28, was organized by the U.S. Embassy's multimedia specialist and ECU alumna Sanny Wroblewski, Eagle said.

The exhibit — the first of its kind at the embassy — will be on display for six months. "'Art for the People' represents the diversity of American society. It also embodies our deep commitment to genuine exchange with the Chinese people," U.S. Secretary of State Antony Blinken said in a news release.

The artists and their work represent a range of political views and social commentary from communities across the country, celebrating freedom of expression and diversity, the release said.

Eagle, an ECU alumnus who has taught at ECU more than two decades, works in a variety of mediums. His paintings and illustrations have been exhibited and reproduced internationally, with work featured in The Oxford American, The New York Times, Wired Magazine, Juxtapoz, The Guardian and numerous books.

Although Eagle has been making art for years, he never painted a mural until November, when he started on the 56-by-17-foot piece on the exterior wall of The Art Lab, an arts incubator and gallery administered by the Pitt County Arts Council in partnership with A Time for Science, the City of Greenville and ECU's School of Art and Design. 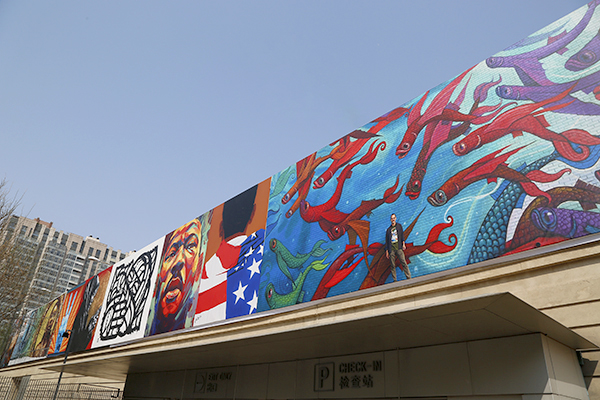 The street art exhibit brightens a wall at the U.S. Embassy in Beijing. | Photo: Contributed
Eagle was selected to paint the mural by the Greenville Mural Group, a subcommittee of the Civic Arts Committee. The design was approved by the city council in September.

Eagle's inspiration actually wasn't a fish, but a bird with a long, deeply forked tail in brightly marked cobalt blue — one color that figures prominently in his piece.

"Several years ago, I came up with this idea of, 'What if a flying fish fell in love with a barn swallow?' because I happened to notice that they're the same shapes," Eagle said. "My work unfolds for me sometimes in a way that I can't anticipate. It's kind of like dreams, where it's like, 'Where did that come from?'"

After painting the mural, Eagle responded to an embassy request for U.S. public art, sending several images of his work while not thinking it would be selected. He said it's been surreal to see a photograph of his painting and himself more than 7,000 miles away in the world's most populous country. Freelance photographer and ECU alumnus Ryan O'neal Harper of Greenville took the photo that was reproduced for the exhibit.

Get more information about the "Art for the People" exhibit HERE.
Go Back