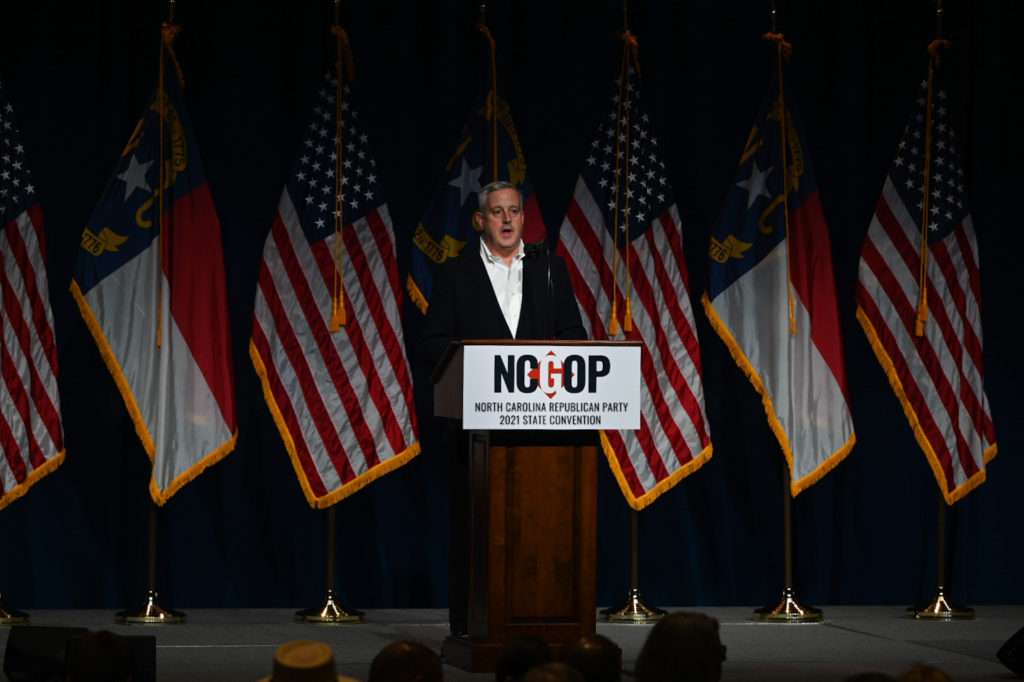 The Carolina Journal is reporting:

Heading into the 2022 mid-term elections, the N.C. Republican Party will have continuity and unity surrounding its leadership. The state GOP re-elected Watauga County native and current Gaston County resident Michael Whatley as chairman during the party’s annual state convention.

Whatley will oversee state party operations, including critical get-out-the-vote operations for 2022 election. He will be tasked with unifying the activist base of the party after a potentially contentious party primary for an open U.S. Senate seat.

Whatley was first elected state party chair in summer 2019. Under his leadership, the 2020 elections were largely successful for the GOP. Then-President Donald Trump won the state’s electoral votes for a second time. Thom Tills was re-elected to the U.S. Senate in a come-from-behind victory. Republicans won open Council of State races for lieutenant governor, labor commissioner, and superintendent of public instruction. Republicans also captured all the statewide judicial elections and added seats in the GOP-controlled General Assembly.

While Whatley’s re-election never appeared in doubt, his victory was likely sealed when he landed Trump to keynote the convention.

The 45th president released a statement just hours before his appearance praising Whatley:

“A great honor to be speaking at the North Carolina GOP convention tomorrow night. I understand the place will be packed; all records broken! North Carolina produced a big victory for us, without a fraudulent outcome — missing ballots, illegal voting, dead people voting, and all of the other Democrat tricks. Before my Election in 2016, everybody said North Carolina was going ‘Blue,’ now they are saying that the Great State of North Carolina is surging big for Republicans. Look at the results we have produced. Thank you to Michael Whatley and the state party.”

Trump’s appearance will also raise significant funds for the state party, which has been on solid financial footing during Whatley’s tenure.

Whatley told delegates efforts are already underway to build a significant get-out-the-vote operation to meet the party’s goals. Among them: holding the open U.S. Senate seat currently occupied by Sen. Richard Burr, picking up additional congressional and legislative seats, and obtaining a majority on the state Supreme Court.

Ninth Congressional District Chair John Steward said via social media: “In 20 years, I have been going to NCGOP conventions, this is the FIRST time I have seen a State Party Chairman be unopposed and elected by UNANIMOUS CONSENT!! Congratulations Chairman Michael Whatley!”

In a statement, Whatley said election integrity is “an issue we must address head-on to move forward as a party and as a country.”

“In 2020, the North Carolina Republican Party led the nation in implementing an effective statewide strategy to protect the vote,” he said. “This committee will spend the next year-and-a-half building on our past successes to ensure the 2022 elections in North Carolina remain fair and transparent.”

Mills emphasized her intentions to work closely with Whatley and to help build county parties.

“It is crucial that we have a state party that works together, instead of against each other. Our chairman and vice chairman need to work together for the greater good,” said Mills. “By activating, communicating, and engaging our county parties, we can help provide them the resources they need to activate, communicate, and engage their communities. It is critical that we equip our county parties with the information, resources, and direction they need to help keep North Carolina red in 2022 and beyond.”

Whatley and Mills will serve a two-year term until the summer of 2023.