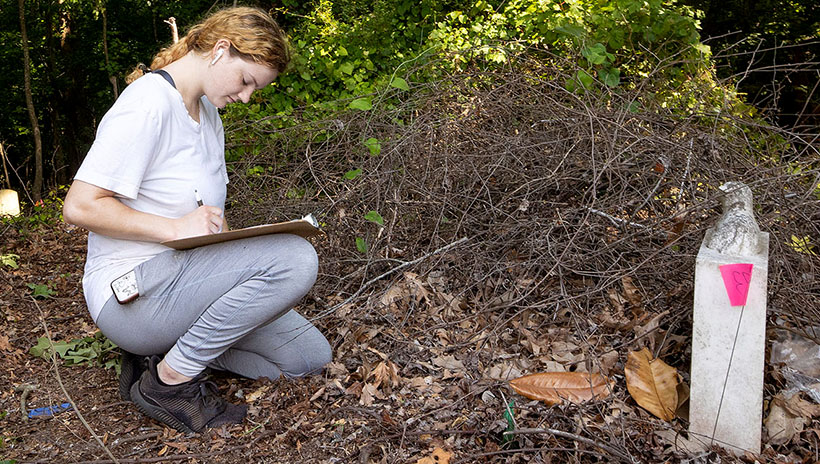 East Carolina University students in the Department of Anthropology are back in the field this summer helping recover and catalog abandoned cemeteries across eastern North Carolina. 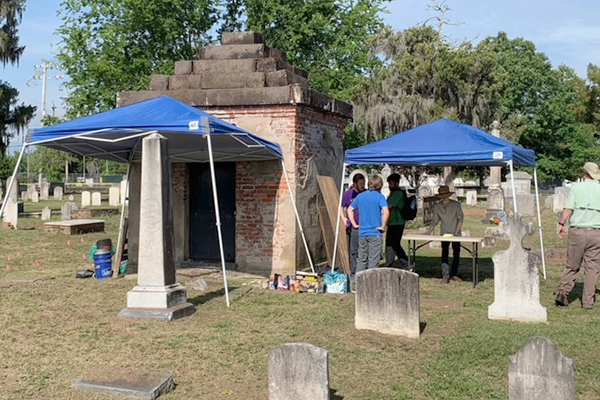 Anthropology professor Charles Ewen and his team of students work at a family vault in New Bern. | Photo: Contributed
Under the direction of Dr. Charles Ewen, professor and director of the Phelps Archaeology Lab, a crew of 16 undergraduates and two graduate students are traveling to various local cemeteries to help reclaim the history of these locations for the communities. The work is supported by the Colonial Dames of America, the National Endowment for the Humanities and the National Science Foundation.

"I take the students to historic sites on which I have either worked or studied and give them the rest of the story," Ewen said.

The class began its fieldwork in May in an abandoned African American cemetery in Ayden.

"This is a cemetery consisting of around 400 graves that were abandoned and nearly forgotten in the early 1960s," Ewen said.

Ewen and the students worked with the town of Ayden to reclaim the grave — clearing the overgrowth, documenting the gravestones and unmarked grave depressions and preparing an accurate map of the cemetery. The students learned to use the department's total station surveying machine, identify subtle differences in the landscape and record key features.

Edwin Averette, senior anthropology and fine arts undergraduate student, said, "Fortunately for me, this is a research topic I have focused on for several years. This subject matter, plus my first in-person interactions with academic peers in over a year, is what I am enjoying most during this field school."

"The experience of participating in archaeology alongside the crew of other students is great," he said. "There is a lot to learn. Everyone gets a chance to learn the techniques and technologies." 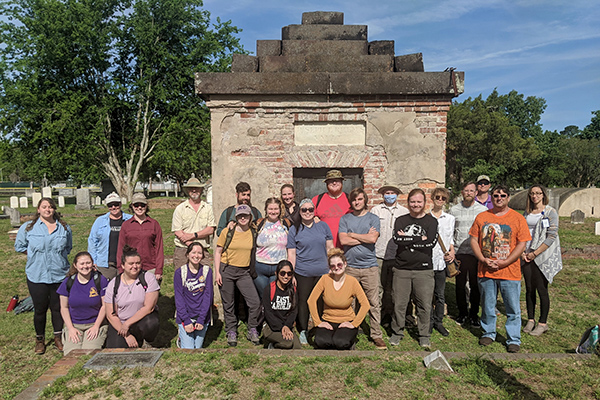 ECU faculty and students from the Department of Anthropology prepare to work on a family vault in New Bern. | Photo: Contributed 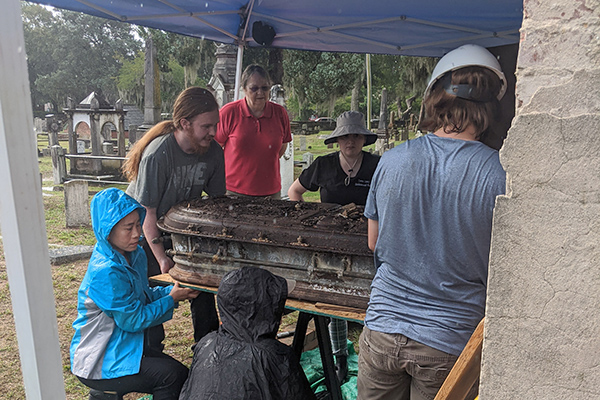 Upon graduation, Averette will receive his certificate in cultural resources management and is interested in continuing to bridge the two fields of art and anthropology into a graphic design position working on cultural resource projects.

During the first week of June, students worked at a family vault in New Bern — for the Rhem Family Foundation — removing human remains from an above-ground tomb so that the descendants can repair the structure.

"This work was complicated by the fact that the vault had been broken into and the contents of the coffins dumped on the floor," Ewen said. 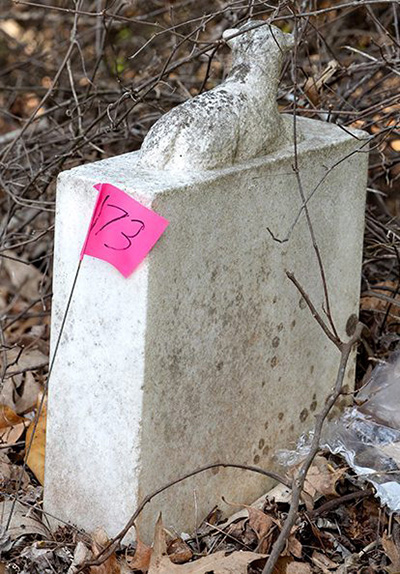 Flags mark graves with and without headstones in Ayden’s abandoned cemetery. | Photo: Rhett Butler
Undergraduate students recovered remains from the Rhem tomb, and two graduate students are reassembling them as part of their thesis work.

"I am enjoying ensuring that a history and space that have been largely overlooked are once again brought into the public arena," said Rachel Ransome, anthropology graduate student, whose thesis focuses on how African American cemeteries have been neglected throughout American history.

"This is my second time acting as a supervisor for a field school," she said. "I have worked on archaeological digs in Cyprus, Italy, and other states here on the East Coast, and I have enjoyed watching the students become interested in how archaeology can help bring forgotten histories to the forefront and assist communities in acknowledging the deceased still have important roles to play.

"The field school has drawn a lot of attention, and we have been lucky to have so many interested parties come by our sites, ask us questions and just generally been keen to learn about the process that cemeteries and other sites go through on their way to being abandoned. The field school has taught me that one has to be adaptive in their approach," Ransome said.

Ransome will graduate this summer and plans to apply for doctoral programs. Her goal is to work in public service and human rights using archaeology and anthropology as an interdisciplinary approach to these issues, especially in communities that have been marginalized or have had their histories overlooked or excluded.

During the final two weeks of June, Ewen's team will travel to Princeville — North Carolina's first free African American township — where it will work on recording the community's cemetery. All records were lost during flooding events, including Hurricane Floyd in 1999 and Hurricane Matthew in 2016.
Go Back