We Have a Deal — NC Legislative Chambers Agree To Spending Amount 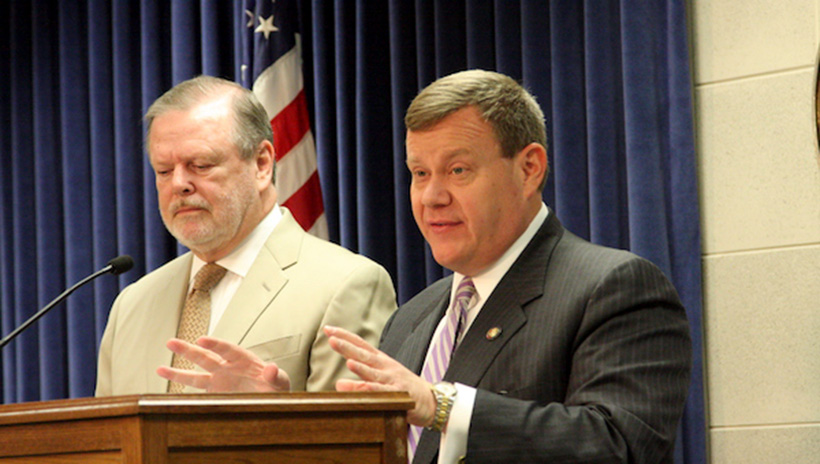 With the end of the state's fiscal year just three weeks away, the N.C. House and Senate have reached a deal for the next budget. After weeks of closed negotiations, N.C. Senate and House leaders have agreed to a top-line spending number of $25.7 billion in the first year and $26.7 in the second year. That's a spending increase of 3.45% in the first year of the biennium and 3.65% in year two.

Carolina Journal first reported that the two sides were about $500 million apart in their proposed total spending and with these numbers, it appears the two chambers agreed to meet in the middle. The release out Tuesday morning said that the two chambers have agreed to replenish the state's "rainy day fund," cut taxes, and put $4.2 billion in new capital funding in the State Capital and Infrastructure Fund. They have also agreed that the budget will not have a bond or Medicaid expansion, both of which are on Governor Roy Cooper's proposed budget wish list.

"This agreement builds on the last decade of responsible Republican-led budgets resulting in a boom decade that put North Carolina on a strong trajectory to recover from the recession." Senate Leader Phil Berger and House Speaker Tim Moore said in a joint statement. "As we work out the details of the budget, we intend to fulfill our commitment to balance the budget while saving for future needs and cutting taxes for the vast majority of residents."

From here, the Senate leads the process of filling in the line items and allocating funding. Once they complete it, the House will consider the Senate's plan and offer their own. Allowing time for committee discussion and review, members expect to vote sometime in mid-June and could get the budget on Cooper's desk the week after the Fourth of July holiday. Under state law, the previous year's budget will continue past July 1 and remain in effect until a new one is passed and signed by the governor.

The haggling over a final spending number went on between leadership in each chamber and has been the subject of much speculation and media coverage over the past few weeks. CJ first reported that the two sides were about $500 million apart, but both chambers wanted to spend significantly less than the budget priorities submitted by Cooper in March, which increased state government spending by more than $3 billion or 12%.

Cooper has vetoed every budget since taking office, and lawmakers are considering the likelihood that he could do it again. Last year, he vetoed one that contained raises for teachers and state employees, arguing that he wanted funding to add more than 700,000 people to the Medicaid program and that the teacher raises were not big enough. The end result was no budget, and no raises. As lawmakers prepare to send him another budget, the possibility of another two years without teacher raises could draw enough Democrats to cross the aisle and vote for it or vote to override a gubernatorial veto.

Part of the challenge in this year's negotiations is a significant budget surplus of nearly $5 billion in state revenue and about $5.7 billion in additional one-time federal COVID relief money from the American Rescue Plan. The temptation to spend more may have slowed the process, but the agreed-upon total spending number is within the formula outlined in the proposed Taxpayer Bill of Rights constitutional amendment (Senate Bill 717); the previous year's spending, plus the rate of inflation and the rate of population growth.

"We are pleased to see that the fiscal restraint the General Assembly has shown over the last ten years will continue," said Brian Balfour, senior VP of Research at the John Locke Foundation. "It's a strategy we would like to see added to the state constitution in the Taxpayer Bill of Rights."

This year, some of that surplus may go back to taxpayers as the lawmakers are working tax cuts into the overall plan. The cuts proposed by the Senate in House Bill 334 include a higher standard deduction (zero tax bracket), an increase in the per-child tax deduction, a reduction in personal income taxes, and some cuts to business taxes, possibly phasing them out completely by 2027.

Negotiations are also underway on taxation and Paycheck Protection Plan loans for businesses. In April, the House passed a bill that would allow businesses that received PPP loans from the federal government to have any expenses the funds were used for deducted from state tax. The Senate proposal would instead allocate $1 billion in grants using federal emergency relief dollars to businesses that received earlier rounds of COVID-19 relief.

With the budget process moving faster, the backlog of bills in each chamber should start to clear quickly. Among those in the Rules committee holding pen are two constitutional amendments, the Emergency Management Act Reform, the Academic Transparency measure, Donor Privacy, and a number of healthcare bills and regulatory reform bills. Generally, the body takes about two weeks after the budget to wrap up business and adjourn the session.
Go Back