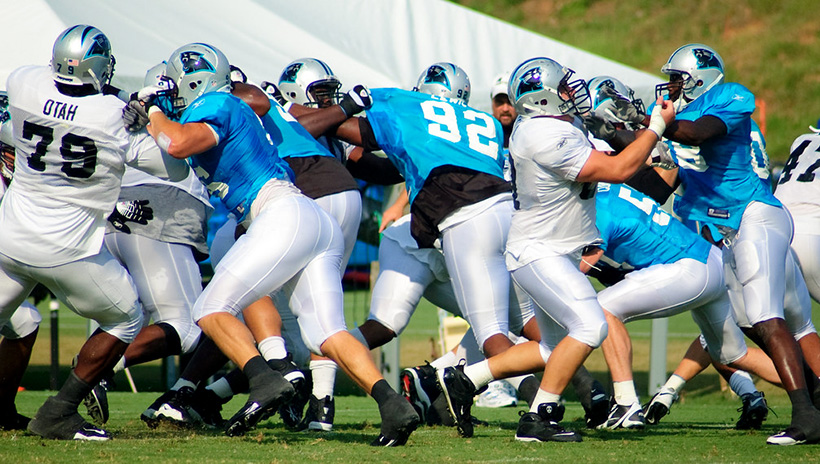 This offseason has been very different from a year ago for the Panther coaching staff as a whole, as with OTAs happening in person they have already had a chance to get hands-on with their players which will hopefully pay dividends as they move towards the start of the regular season. However, for defensive line coach Frank Okam, this offseason is very different in another regard, as after spending the 2020 as the assistant defensive line coach, he now finds himself in charge of the development of a very young but hugely talented group.

Speaking to The Riot Report, Okam described how he is approaching his new role and how the changes from a year ago are helping to put the defensive line in the best position to succeed:

"The main difference is it's your vision and, with the help of the other guys I've worked with, but it's our plan to try to have a chance in the offseason to implement an ideology, a mentality and a brand that we really want the defensive line to try to represent. Last year, obviously, you're trying to allow guys to learn a scheme, get comfortable with scheme, build a brand and identity and get ready for opponents for the regular season. So it's just a little harder to get some of the minutiae, some of the philosophy, some of the ideology ... you're really trying to make sure that can execute a play right."

While Okam is a new face as the defensive line coach for the Panthers, he is not a new face in this role under Phil Snow and Matt Rhule, having spent two seasons as the defensive line coach at Baylor prior to joining them in Carolina, and that background working with and looking to develop younger athletes is valuable experience for a coach who is now tasked with taking a defensive line room that has seen seven players drafted into it over the past three offseasons, including five over the last two.