ECU Duo Nominated for NCAA Woman of the Year 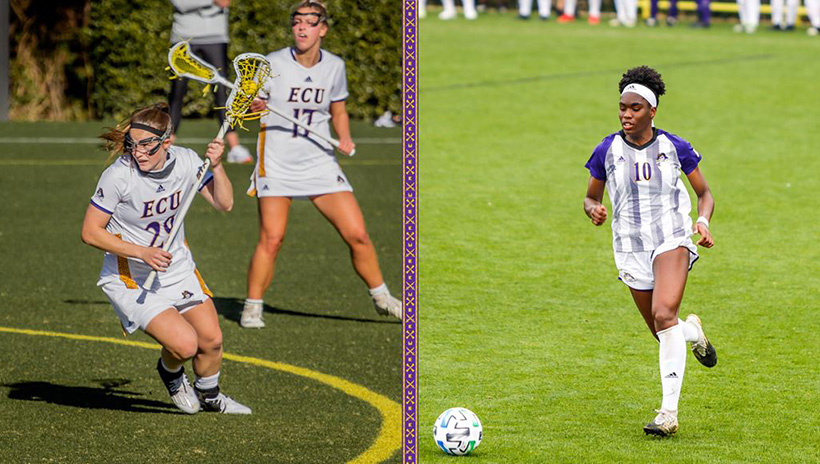 GREENVILLE, N.C.     A pair of East Carolina student-athletes, Kim Sanford and Megan Pallozzi, have been named the athletic department's nominees for the 2021 NCAA Woman of the Year award.

Both Pallozzi and Sanford were leaders on their Pirate squads this past season and were both named to AAC All-Conference Teams in their respective sports. Sanford was a team captain for the East Carolina soccer team and helped the Pirates reach the AAC Championship semifinals for the second time in three seasons. Pallozzi was a team captain on the East Carolina lacrosse team and was a major key in ECU winning its first AAC games in program history.

Pallozzi finished her four-year Pirate career as the top goalscorer in East Carolina lacrosse history. The Ellicott City, Md. native became the first Pirate to score 30 goals and record 40 points in a single-season, finishing the 2021 campaign with 36 goals and seven assists for 43 points. Pallozzi was in the top-10 in the American in goals per game (2.25, tied for sixth), points per game (2.69, tenth) and free-position goals per game (0.69, tied for fifth). Pallozzi was one of the deadliest shooters in the country, finishing 32nd in the country in free-position shot percentage, shooting 61.1% from the eight-meter arc. The senior attacker also became the second Pirate to ever reach 100 career points and the first to score 100 career goals. Pallozzi was honored by the conference twice during the season, earning a spot on the weekly Honor Roll on both Feb. 15 and March 1 as well as being named to the American All-Conference Second-Team.

"I am proud to be a nominee for the 2021 NCAA Woman of the Year," Pallozzi said. "It has been an incredible experience to be part of the inaugural women's lacrosse program at East Carolina and compete in the Purple and Gold. Representing the University and Athletics Department on the national level an extraordinary honor. Go Pirates!"

Pallozzi graduated from East Carolina Honors College of Biology in 2021, finishing her career as a three-time AAC All-Academic Team honoree. She was named the 2020 AAC Scholar Athlete of the Year and was a member of the Phi Kappa Phi Honors Society. Pallozzi will next head to the University of Georgia to study at the College of Veterinary Medicine.

Sanford was named to the AAC Preseason All-Conference team and there was rarely a minute that she was not leading the Pirates on the field. The Philadelphia, Pa., product played 1,021 of a possible 1,038 minutes, going the distance in nine of ECU's 11 games. She was a rock in the heart of a Pirate defense that finished fourth in the AAC in goals allowed per game. Sanford finished the season earning a spot on the AAC All-Conference Second Team for the second straight year.

"It's such an honor to be nominated for NCAA Woman of the Year," Sanford said. "The nominees for this award are the best of the best on and off the field, so to be able to represent ECU on that level is such a privilege. I'm also thankful for the coaches, staff, administrators, and professors that challenge me academically and athletically; none of my achievements would be possible without their support."

Sanford graduated from East Carolina with a degree in Exercise Physiology in December 2020. She is currently studying to complete her Masters Degree in Kinesiology with a concentration in Sports and Exercise Psychology and will have one year of eligibility remaining on the soccer field. Sanford is a four-time AAC All-Academic team honoree as well.

"We are so proud of Kim and this nomination," said East Carolina head soccer coach Jason Hamilton. "She is the perfect representation of what we want our student-athletes to strive to be. Kim excels in the classroom, the soccer field and in the community. She has grown tremendously as a leader over the past few years and it has been great to witness that transformation."

The AAC's Senior Woman Administrators will vote among the nominees from across the conference to select the two student-athletes who will represent the conference among the 2021 NCAA Woman of the Year finalists.
Go Back