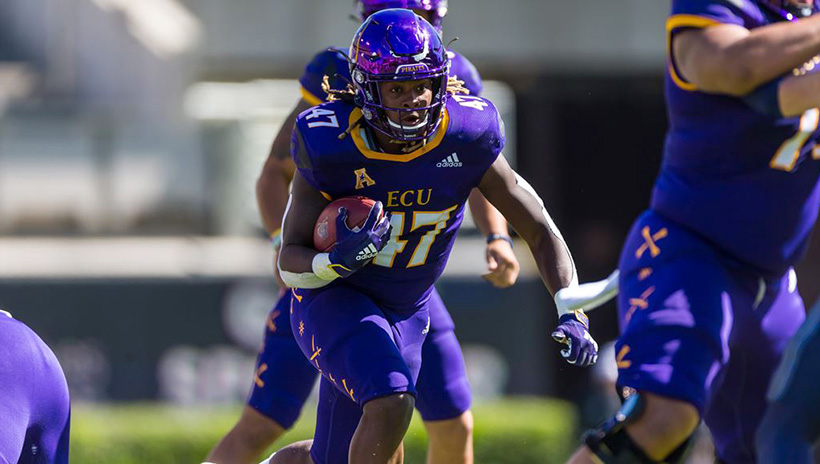 DALLAS, TX     East Carolina freshman Rahjai Harris is one of 82 running backs named to the 2021 Doak Walker Award Preseason Watch List according to an announcement by the PwC SMU Athletic Forum Wednesday. The Forum annually presents the award to the nation's top running back.

Harris, who was a preseason First-Team All-American Athletic Conference selection by Phil Steele Magazine, rushed for 624 yards with four touchdowns in eight games during the 2020 season to earn AAC Rookie-of-the-Year and first-team all-conference accolades. He averaged 4.9 yards per carry and stood third in The American in rushing yards per game (78.0).

A native of Duncan, S.C., Harris ran for 100-plus yards in three consecutive games (115/USF, 172/Navy, 118/Tulsa), becoming the first Pirate running back since Tay Cooper (2012) to reach that milestone. His 172 yards against the Midshipmen were the most in an ECU game since Breon Allen racked up 211 against North Carolina in 2014, and it was the second-highest ever turned in by an East Carolina freshman, following Scott Harley's 175-yard outing against Temple in 1995. Harris also caught six passes out of the backfield for 31 yards and one score.

The PwC SMU Athletic Forum Board of Directors will name 10 semifinalists in November, and three finalists, as voted on by the Doak Walker Award National Selection Committee, will be announced later that month. The committee will cast a second vote in December to determine the recipient. The National Selection Committee consists of past recipients, former NFL All-Pro and college All-America running backs, media members and selected special representatives.

The recipient of the 2021 Doak Walker Award will be announced live on The Home Depot College Football Awards. The award is named for SMU's three-time All-America running back Doak Walker. It is the only major collegiate award that requires all candidates to be in good academic standing and on schedule to graduate within one year of other students of the same classification.
Go Back