Why North Carolina Needs a Taxpayer Bill of Rights, In One Chart | Beaufort County Now | Conservative legislative leadership has held state spending growth in check over the last decade.

Why North Carolina Needs a Taxpayer Bill of Rights, In One Chart

Conservative legislative leadership has held state spending growth in check over the last decade. This is a good thing, meaning that you are keeping and making decisions over more of the money you earn, and the government's sway over the economy is smaller than it was under previous spend and tax regimes.

But such responsible budgeting is one election away from swinging back to the irresponsible, unsustainable spending sprees of the past.

That's why a Taxpayer Bill of Rights (TABOR) is so important. A TABOR would establish annual limits to state spending growth tied to the rate of inflation and population growth. Important to note, a TABOR would not require spending to keep pace with inflation and population growth, but rather establish a hard cap on spending that could not be exceeded. Ideally, a TABOR would be added as an amendment to the state constitution to make it more permanent and binding. Other provisions in a TABOR often include voter approval over tax increases as well as rebates to taxpayers when revenue exceeds certain thresholds.

The chart below demonstrates just how crucial establishing a solid and permanent spending restraint is for North Carolina. It visualizes the reckless spending binges that previous leftist regimes embarked upon for decades prior to the last decade of conservative leadership. 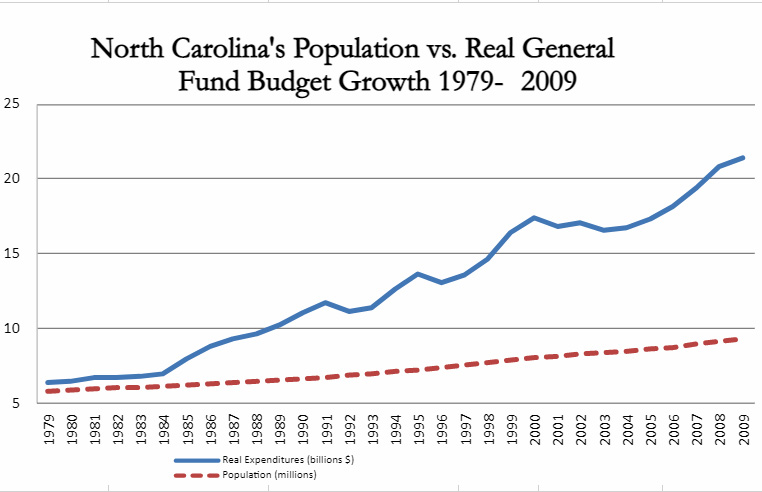 In the three decades leading up to the Great Recession:


North Carolina taxpayers simply can not afford to return to the outrageous spend and tax policies of decades past. Adding a TABOR to the state's constitution would ensure we don't.
Go Back