Clint Eastwood Will Speak at the Republican National Convention

Login to Send a Private Message to Stan Deatherage
Actor / Director / Producer / Musician and Republican Clint Eastwood will speak to the Republicans, and all of America, tonight at the Republican National Convention in Tampa, Florida.

It had been rumored much of today, August 30, 2012, that the former mayor of Carmel, California would speak as a secret guest at the convention. Now it is official, Clint Eastwood will speak at some point before Florida Senator Marco Rubio introduces the Republican Presidential Nominee, Governor Mitt Romney, to deliver his acceptance speech at the climax of the convention. 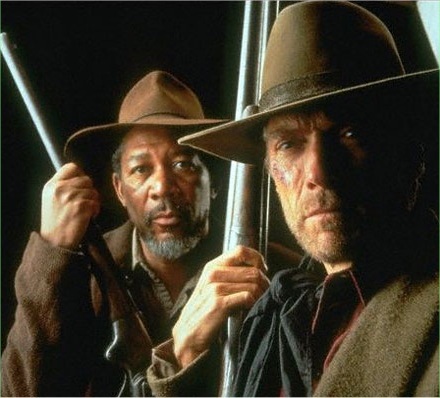 Morgan Freeman (left) and Clint Eastwood (right) from the classic morality play "Unforgiven"
has long been an artist of outstanding integrity of purpose, but often remained apolitical in his approach to artfully expressing his ideology through his primary medium of film. Over the years fans, and critics alike have searched Clint Eastwood's catalogue of films to find some sense of where the enigmatic artist's personal sense of sociological and political aspirations and inspirations reside.

Actor Eastwood was such an iconic and believable symbol of Americana, through film, that his character's lines always bore a higher level of humanity, truth, which observers tended to read more into than they probably actually deserved. These memorable lines, as a few are listed here below, remain popular, re-quotable and still important to some Americans.

Tonight, this iconic American actor will take a firm stand in front of Republicans, and all Americans, to firmly state how he really feels about the Republicans' choice to run for president, and the proper path he sees for the future of our American way of life.


Clint Eastwood through the roles he played:

from "Unforgiven," 1992:
The Schofield Kid: [after killing a man for the first time] "It don't seem real... how he ain't gonna never breathe again, ever... how he's dead. And the other one too. All on account of pulling a trigger."
Will Munny (Eastwood): "It's a hell of a thing, killing a man. Take away all he's got and all he's ever gonna have."
The Schofield Kid: "Yeah, well, I guess they had it coming."
Will Munny: "We all got it coming, kid."

Little Bill Daggett (Gene Hackman): "I don't deserve this... to die like this. I was building a house."
Will Munny Eastwood) [with a shotgun barrel point inches from Little Billy's face.]: "Deserve's got nothin' to do with it."

Harry Callahan (Eastwood): "I know what you're thinking. 'Did he fire six shots or only five?' Well, to tell you the truth, in all this excitement, I kind of lost track myself. But being as this is a .44 Magnum, the most powerful handgun in the world, and would blow your head clean off, you've got to ask yourself one question: Do I feel lucky? Well, do ya, punk?"

"I have strong feelings about gun control. If there's a gun around, I want to be controlling it."

Understandably Mr. Eastwood may have strong feelings about gun control, but he also has a strong belief in all things American, especially our cars. In "Gran Torino," Eastwood brings to us that gruff of an old man, who knows what is best, and well within his right to feel that way.

A few Republicans bemoaned Clint Eastwood's "Half time in America," which began airing at half time of the 2012 Super Bowl, as an endorsement for the Democrat bailout of General Morors and Chrysler Motors, but actually it was just vintage Eastwood being Eastwood.

We'll probably get a strong glimpse of what is "vintage Eastwood" tonight before Mitt Romney accepts the inevitable, and the Romney/Ryan team lead us from this "National Embarrassment" that has been the Candidate Barack Hussein Obama Administration.