Published: Saturday, August 14th, 2021 @ 10:52 am
By: Carolina Journal   ( More Entries )
Publisher's Note: This post appears here courtesy of the Carolina Journal. The author of this post is Jeff Moore. 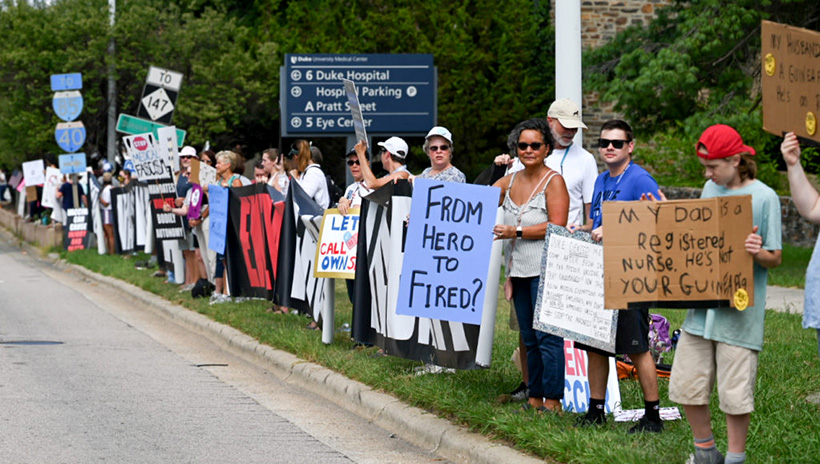 Protesters lined up at Duke Health in Durham to demonstrate their objection to vaccine mandates for employees. | Photo: Maya Reagan / Carolina Journal

As the controversy over vaccine mandates grows, public officials' animus for the unvaccinated is resonating among social justice activists.

On Thursday, July 29, Gov. Roy Cooper announced that while the statewide mask mandate would still expire at the end of the month, his administration was focused on increasing vaccinations and was implementing a verification, masking, and testing regime for all cabinet agency employees He blamed the unvaccinated for contributing to the continued spread of the virus and urged the vaccinated to "channel your frustration" toward the unvaccinated.

On Friday, July 30, a group assembled outside the entrance to Duke Health in Durham protested the hospital system's vaccination mandate for all employees. Tonya McFallin of Orange County said she was there to stand up for friends and family, some of whom had been working for Duke for 25 years, but were against a vaccine mandate.

"[I'm out here] to fight for my friends and family that work here at Duke, or UNC, or WakeMed, that don't want to take the vaccine, to stand up for them. Some of them would prefer to be here themselves but they don't want to take a chance of getting fired or getting in trouble. My personal opinion, if you want the vaccine that's fine, but don't force it on myself, my friends, my family, or anybody else. It's not right."

Across the street, an 'antiracist' activist came to watch. She snapped pictures of the protestors and the likely images ended up shared on a social justice Twitter page warning other anti-racists about the presence of anti-vaccine protesters and how they were "likely spreading COVID."

Several people there identified the woman as Heather Ahn-Redding. More familiar with protesting Confederate statues and white supremacy, Ahn-Redding was a criminal justice professor at High Point University as recently as May of 2020.

But when CJ asked the woman for her name, she walked away.

Explaining her interest in documenting this seemingly unrelated protest event, the woman said, "It's just disgusting. [...] These are the same people who probably believe the election was rigged, who probably supported the Jan. 6 insurrection."

On Aug. 4, Cooper held another COVID-19 briefing in which he pushed for a commercial and social mandate on vaccination, encouraging businesses, employers, and schools to require the vaccine, or adopt policies that encourage it.

"I've also strongly encouraged private businesses to do the same and many are stepping up," he said. "A number of businesses are requiring vaccines for their workers, and I applaud that. We need all of us to come together and do what we can to increase our vaccination rate and stay safe from this disease - and that includes the private sector, nonprofits, doctors, schools, and health departments. As K-12 schools prepare for the new school year, I encourage school boards to ask their staff and eligible students to get vaccinated as well."

While he spoke, more health care workers were in Raleigh, again protesting vaccine mandates. When asked about the concerns of these health workers, Cooper lamented, "That's so disappointing. [As a health care worker] it's your responsibility to get a vaccine," adding, "I think these health care facilities have made the right call in requiring their employees get vaccinated."

The majority of press questions Wednesday focused on if, when, and/or how Cooper would bring back restrictions in an attempt to arrest the current spike in cases. Would he mandate masks again? Is he worried about hospital capacity ("There are no hospitals, at this time, sounding alarm bells.")? Should schools keep remote learning options open? At what point do you get tough with the unvaccinated?

"All options are on the table," Cooper said, appearing exasperated. "We don't want to do those other things if we don't have to."

While avoiding the apparent divergence between the current fears and attention over delta spikes, and the simultaneous dropping of restrictions, Cooper did make clear his message about the unvaccinated.

"Yeah, you made the decision to not get vaccinated," Cooper said. "But what you're doing is you're putting everybody else at risk because you've made this decision and you're continuing to foster this virus in the community."

When pressed for what tools he's prepared to use to fight the spike in cases, Cooper maintained that "people know what to do," with respect to masking and social distancing.

He reiterated his administration's preference for having the private sector mandate vaccines for employees and customers, instead of state government; he touted the state's new vaccine cards as a way to facilitate mandates, and encouraged businesses to use the state's verification process to enforce vaccine mandates for employees and customers; and, just in case he wasn't explicit enough about where to place blame for all of this, Cooper stated, unequivocally, that "Unvaccinated people are causing a surge in this pandemic."

In a time marked by social upheaval, deep political division, the protests over the last week indicate a brewing ascendance of mob demand, and it's intersecting with groups who have displayed riotous protests on other issues. While Cooper stops short of a government mandate, his vaccine pressure campaign on agencies and the private sector appears to be painting a target on the back of people who, for whatever reason, chose to remain unvaccinated.
Go Back