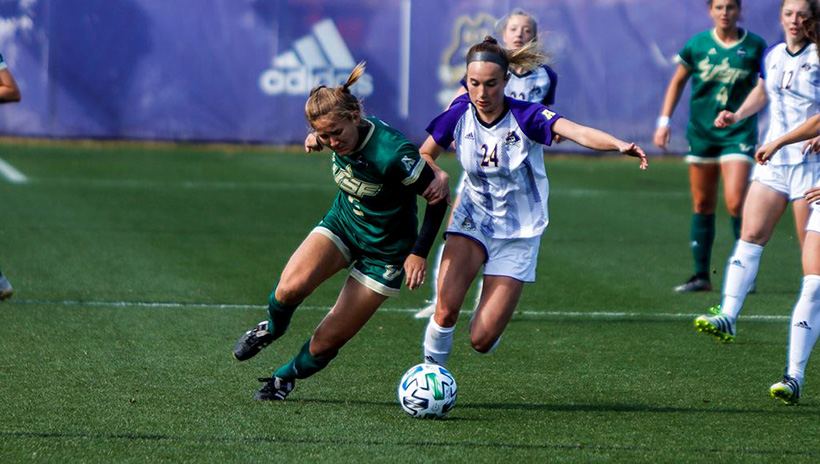 GREENVILLE, N.C.     In the first exhibition match of the 2021 season, the East Carolina soccer team dominated Longwood 2-0 on Tuesday afternoon at the Longwood Athletics Complex.

"We are very pleased with the team's performance today," said Head Soccer Coach Jason Hamilton. "Everything we wanted to accomplish took place and was a true testament of the preparation the team put in over the last nine days."

The Pirates were the aggressor for most of the first half and it showed on the stat sheet. ECU outshot Longwood 13-1 in the opening 45 minutes, including 6-0 in shots on goal. The pressure paid off in the 19th minute. Haley McWhirter got a hold of a long ball behind the Longwood defense and was able to get by the Lancer goalkeeper before knocking a shot into the goal to open the scoring.

"I thought the first half, we did a very good job of executing our plan in the system that we were playing and were creating a lot of chance," Hamilton said.

Less than six minutes into the second half, ECU was able to double its advantage. Off a Pirate set piece, a cross came into the box and McWhirter got to it, flicking a shot over the goalkeeper for her second tally of the day. Holly Schlagel and Sierra Lowery both picked up assists on the goal.

"The second half, we made an adjustment in our shape and credit to Longwood, they made the game tough," added Hamilton. "The stats evened out a little bit in the second half, but I thought the quality of our chances were a little bit better than in the first half."

The exhibition gave Hamilton and his staff a chance to show off the team's depth, with 26 players seeing action for East Carolina. McWhirter, Schlagel, Samantha Moxie and Abby Sowa all made their first starts in a Pirate uniform while Molly Thomas, Izzy Lusardi, Kylie Alvarez, Lindsey Aiken, Rachael Wilsynski, Taylor Kibble, Peyton Godbey and Maggie Leland all got their first minutes wearing the Purple and Gold.

East Carolina finished with a 20-6 edge in shots and a 5-3 lead in corner kicks. Maeve English started in the goal and made one save in 49:34 of action. Meaghan Haley played the next 19:25 in the net and made one stop of her own. Leland relieved Haley for the final 21:01 and completed the shutout for the Pirates.

"The team is excited about where we are and this is a great opportunity to build off of going into Saturday's game," finished Hamilton.

The Pirates will play a second tuneup match on Saturday afternoon as they play host to UNCW. Kickoff is scheduled for 12 noon in Johnson Stadium and is free to attend.
Go Back