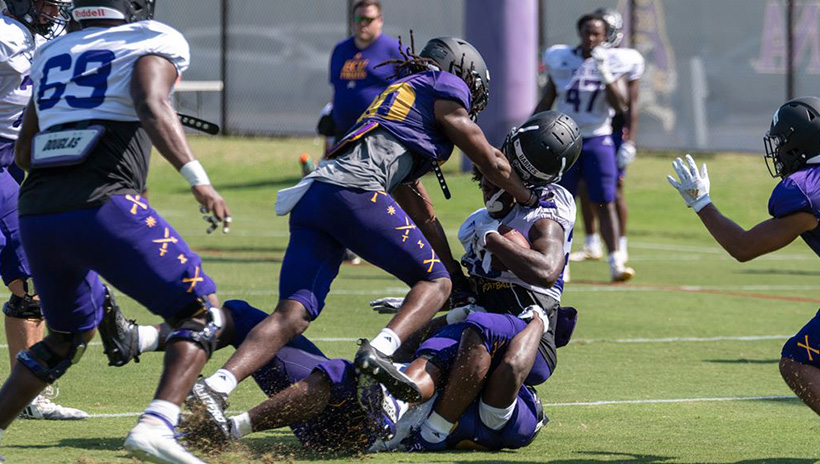 GREENVILLE, N.C.     A pair of practices in shorts and three more in shells led to East Carolina's first full-pad workout of its 2021 preseason camp Tuesday morning at the Cliff Moore Practice Complex. The Pirates completed their sixth overall practice session in more seasonable conditions with temperatures in the mid-80s and higher humidity levels.

ECU also began its preparation efforts in earnest for the first of two scheduled scrimmages, which is slated for Saturday morning at Dowdy-Ficklen Stadium.

"It was the first day in full pads and I was really pleased with a lot of things during practice," Houston said. "It was a cooker with the humidity with the energy up, but the kids didn't disappoint."

Houston, staff and players welcomed the full contact with an early five-minute inside run segment that featured solely 11-on-11 rush plays deep inside scoring territory before returning to customary team and individual drills. After being limited to "thud tackling" during their previous team periods since opening camp, the Pirates also went live during Tuesday's 25-minute action that resulted in several big plays on both sides of the ball.

CAMP NOTES: Sophomore OLB Elijah Robinson was officially removed from the Pirates' 118-man preseason camp roster because of an injury and replaced by TE Bryan Gagg (who was immediately activated to begin his NCAA mandated seven-day acclimatization period which will conclude Aug. 16).
Go Back