Robinson says he’s not resigning, says his comments were twisted

Published: Saturday, November 13th, 2021 @ 8:44 am
By: Carolina Journal   ( More Entries )
Publisher's Note: This post appears here courtesy of the Carolina Journal. The author of this post is Theresa Opeka. 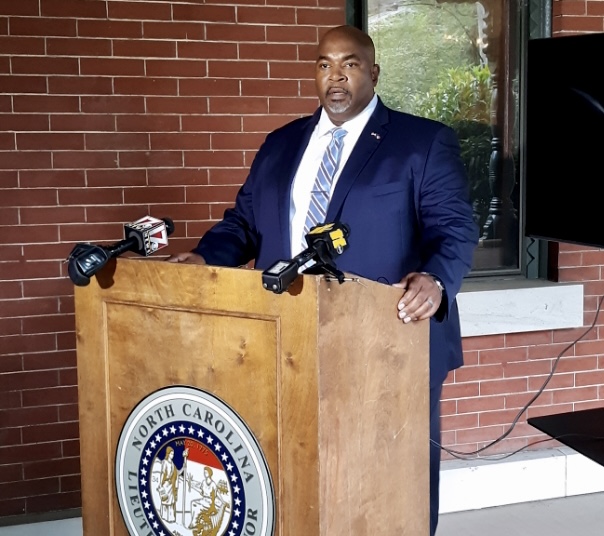 "I will fight every day as lieutenant governor to make sure people’s constitutional rights... are protected, even if I disagree with those lifestyles on a spiritual level.”

Lt. Gov. Mark Robinson says he has nothing personal against LGBTQ people, and he's not resigning.

Robinson, in a news conference Tuesday, Oct. 12, said he wants to get books, which he says depicts "filth," out of some school libraries. Robinson made earlier statements that he wants to remove books such as "George," "Lawn Boy" and "Gender Queer," which have sexually explicit content depicting gay and transgender people, from schools across the state.

"This is the United States of America," Robinson said. "This is not a theocracy. I don't have the right to tell anyone how to live their personal lives. In fact, I am in favor of people being able to determine how they live and be safe in their own space and be secure in their own persons.

"I will fight every day as lieutenant governor to make sure people's constitutional rights, both state and federal, are protected, even if I disagree with those lifestyles on a spiritual level," he said from his official Hawkins-Hartness House residence in Raleigh.

Robinson said the issue has been twisted, and when he spoke from the church pulpit at Asbury Baptist Church in June. He said wasn't talking about any person but rather about materials that were being presented to children.

"Im saying it now, I've been saying it, and I don't care who watches, those issues have no place in a school," he told the congregation in June. A video of Robinson's sermon was shared on Twitter earlier this. week by a leftist group called rightwingwatch.org, self-described as "dedicated to monitoring and exposing the activities and rhetoric of right-wing activists."

Robinson's press conference Tuesday followed called from Democrats for him to resign.

"I challenge anyone. I challenge (State Democratic Sen.) Jeff Jackson. I challenge Roy Cooper. I challenge Attorney General Josh Stein, who should be looking at this issue because this is a legal issue. You can look at this and clearly see this is quite possibly child pornography. And I challenge the White House. The only entity that has been saying anything about this material is this office," Robinson said.

"We have been called liars and have misrepresented this issue. We aren't calling any person filth or anything less than human. We are talking about inappropriate materials being presented to our children. We are talking about those politicians who are trying to demonize me because I am trying to get this out of our classrooms. I challenge anyone out here to say you want your child to look at this or have your child look at this in a classroom," he said.

Robinson displayed pictures from the books displayed and said his task force - investigating indoctrination in schools across the state - has discussed many of them.

"When we mentioned those books, we were largely ignored by the press, we were ignored by the General Assembly and now all of the sudden, people want to accuse me of being the bad guy," he said. "I am not the bad guy, folks. I am the guy trying to get pornography out of the schools."

Robinson said this controversy centers around the question that he hates certain people. He said he challenges anyone to say he hates anyone or has threatened anyone, including children. He also had pictures of threatening messages he and his office have received and played audio of a vitriolic phone call that his office received threatening him personally. He said he has disagreed with people spiritually, politically and socially, but has never disrespected anyone like that.

"Guys, the message I am going to leave with you is this: We are not resigning, and not only are we not resigning, we are not going to stop until the schools in North Carolina are safe from this kind of filth."

Robinson said his spiritual beliefs about transgenderism and homosexuality are separate from the office, referring to his sermon. A reporters' question about removing sexual education classes from schools led him to say it wouldn't matter if the books depicted heterosexual sexual content, he also would want them removed, but not educational material on a biological level.
Go Back