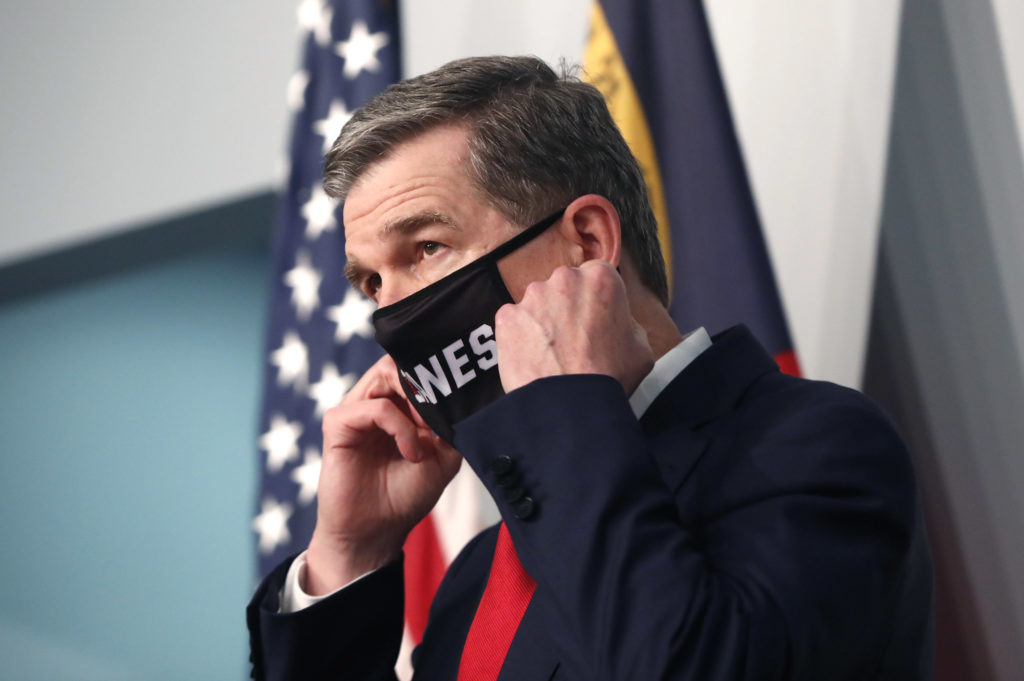 Gov. Roy Cooper has ruled North Carolina with a proverbial iron fist since unilaterally enacting a state of emergency March 10, 2020. The order came without following statutory mandates to consult with the North Carolina Council of State, as Rep. John Bell, R-Wayne, wrote recently for Carolina Journal.

But Cooper, in a news conference Wednesday, Oct. 27, says statewide COVID mandates don't exist statewide. Yet he won't budge on lifting the nearly two year order, reasoning that the ongoing edict allows health care agencies access to emergency money from state and federal pools they otherwise would not get.

COVID numbers across N.C. have fallen recently, with the state's daily positivity rate dropping to between 4.8% and 5.3% over the last two weeks. Still, state health secretary Dr. Mandy Cohen continues to say people should wear masks indoors and that schools should require them for students, giving ammunition to local entities - such as Raleigh and Cary - to continue mask mandates. NC DHHS also tweeted this week that the state has passed the White House's goal of a 70% vaccination rate.

We've reached a milestone in the COVID-19 pandemic, more than 18 months after efforts first began to slow the spread and save lives.

70% of eligible North Carolinians got their COVID-19 vaccine, protecting themselves & communities. Join them by visiting http://MySpot.nc.gov!

Reading between the lines, Cooper's words Wednesday indicate he has no plans to sign House Bill 264, the Emergency Powers Accountability Act, which, as Bell writes, strengthens and clarifies current emergency management laws to restore checks and balances over the governor's executive powers during an extended emergency. The governor has ten days to sign or veto the measure, or it becomes law ten days after it was presented to him on October 22, 2021.

"It is evident that the endless duration of power that is granted to the governor during a self-declared state of emergency needs to be limited and addressed," Bell wrote.

The legislation requires that the governor receive concurrence from the 10-member elected Council of State for an emergency declaration of more than seven days, and legislative approval for it to extend beyond 45 days.

"It does not matter who is governor of North Carolina. Republican or Democrat," Bell writes. "The governor was never intended to have such absolute authority, especially for an unlimited time."

Cooper's news conference closely followed themes and talking points from the left, including on the ongoing budget talks and redistricting. He said he'll soon send lawmakers his proposal.

Cooper and the Republican-controlled General Assembly haven't agreed on a budget since he took office in 2017, and doubt remains as to whether he will agree with Republican lawmakers this time around, leaving the General Assembly to pass so-called mini-budgets to fund certain agencies.

A law passed in 2016 says that, without a new budget, state government reverts to the spending levels in the last enacted budget plan.

Republican budget plans in recent years have funded public education to unprecedented levels and kept taxes and spending in check. Despite agreeing with Republicans on issues such as broadband expansion, it's likely Cooper would throw even more money at public schools. He has shown little interest in Republicans' proposals to cut taxes.

Cooper says negotiations are progressing, and he remains "hopeful."

"In order to get a final budget," he said, "there's gonna have to be significant give and take all around."

Cooper told reporters that nothing is final until the parties reach a goal.

"The governor has yet to sign any budget during his nearly five years in office, so it's unclear what it would take for him to label a budget 'good,'" said Mitch Kokai, John Locke Foundation senior political analyst. "Certainly, the General Assembly never was going to go along with the original budget Gov. Cooper presented to them. Like others he has presented in the past, the governor's budget served as a political document highlighting Democratic wish lists. We've not seen him make a serious attempt to address state government's needs in a sustainable way."

This week, public hearings have been held in the Legislative Building in Raleigh and across the state on redistricting maps from the Senate and House. Lauren Horsch, a spokeswoman for Senate leader Phil Berger, R-Rockingham, confirmed Berger met with Gov. Roy Cooper and House Speaker Tim Moore, R-Cleveland, on Friday to discuss the budget. Items being looked at include raises and bonuses for teachers and state employees, money for education, and tax cuts.
Go Back