The Red Wave Is Here

Yesterday, Republicans had a huge victory in Virginia. 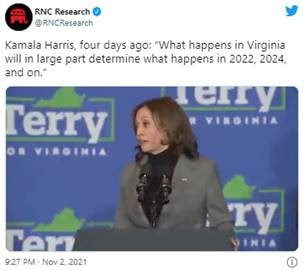 The RNC is proud to have worked with Republicans across Virginia to win this race - including by making over 5 MILLION volunteer voter contacts in Virginia.

Democrats should be worried. Yesterday, voters also rejected the Democrats' radical agenda in New Hampshire, Ohio, and Minneapolis. The RNC's unprecedented data-driven grassroots infrastructure does not stop with Virginia. We have already made 12 million volunteer voter contacts across the country ahead of the midterms.

The red wave is here. It started in Virginia, and it's coming to North Carolina. Things are only going to get worse for Joe Biden and the Democrats.